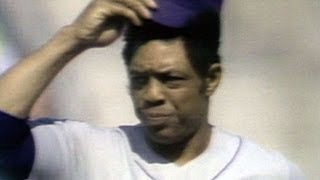 The Boston Red Sox have finally decided to atone for two of the most racist, self-destructive snubs in sports history. Like so many other bigoted decisions, the team -- and the town -- paid a fearsome price.

And it did NOT come from the infamous "Curse of the Bambino."

That one happened in 1920, when my dad was a two-year-old living in the shadow of Fenway Park. It was about money, not race.

That year the shady Bosox owner sold the great Babe Ruth to the hated Yankees for $125,000. He used the cash to fund a musical.

Soon Ruth led New York to more championships than we can bear to count. We wouldn't win again until 2004, a "Cursed" wait of 86 years.

But selling the Bambino was NOT the dumbest thing the club ever did.

Just after World War II, the team shunned not one but TWO players as great as Ruth. And it happened not just from stupidity, but also from explicitly stated racism.

The two passed-over African Americans both went to New York, one to the Dodgers, the other to the Giants. Their names are hard for a Sox fan to say, but here they are: Jackie Robinson and Willie Mays.

In part to atone for those two terrible shunnings, Red Sox ownership has decided to finally strip from a small street next to Fenway the name of Tom Yawkey, the man responsible.

A wealthy South Carolinian, Yawkey owned the Sox from 1933 until he died in 1976. He treated the club like a rich man's toy. His widow hung on until she passed in 1992.

Yawkey did hire Ted Williams, maybe the game's greatest natural hitter. His maternal grandparents were born in Mexico, which was not widely known. In 1941, his batting average was .406. No one has since come close.

When I was 15, my grandfather and I, seated near first base, saw Williams hit a looping line drive over a low right field fence the Sox had set up just for him. Then he spit at a fan.

In 1960 Ted slammed his final homer off the wall in deep centerfield. The crowd went wild. But Williams refused to come out to tip his hat.

That infamous moment was memorialized in John Updike's "Hub Fans Bid Kid Adieu," which forever changed sportswriting. It was a very sad departure.

Related Topic(s): Baseball; Racism; Stupidity, Add Tags
Add to My Group(s)
Go To Commenting
The views expressed herein are the sole responsibility of the author and do not necessarily reflect those of this website or its editors.