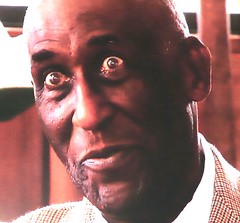 If Americans watched the PBS/Frontline documentary "The Quake" last Tuesday, they would have learned that nearly half of all Americans contributed to the Haiti relief effort in the wake of the magnitude 7.0 earthquake that shook Haiti on January 12, 2010. According to Hilary Clinton, the amount donated was over $700 million dollars. So, with such a potentially vast American audience, it would have been great if the writers and producers of "The Quake" had offered a documentary that was not only representative of the immediate aftermath of the devastating earthquake, but was also an accurate historical, political, and economic perspective on what has made Haiti so desperately poor and vulnerable to this "natural" disaster. Instead, Fronline chose to spotlight among others, former World Bank executive, Marc Bazin. Bazin was Washington's candidate in the December 1990 Haiti presidential elections. Bazin was trounced by Jean-Betrand Aristide, who won an easy victory with two-thirds of the vote. Marc Bazin came in a distant second with 14%. 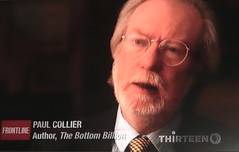 Neoliberal Economist Paul Collier on his UN
role of finding "strategies that gov'ts would find helpful" in Haiti.

Speaking of elections, perhaps the producers were unaware that Haiti has a popular political party with representatives that they could have tapped to speak on the political issues that this "documentary" attempts to tackle. It is at the very least symbolic that Fanmi Lavalas was also barred from the April 2009 elections and again from this year's rescheduled February elections.

In this regard, Frontline is in line with the U.S. government, which learned a lesson from the 1990 elections. The lesson was that allowing a free election may result in the election of a populous, liberation theology Priest who may advocate for modestly higher sweatshop wages, for building the country's infrastructure and institutions (Aristide founded Haiti's first medical school) and who would want vital services like electricity, mill and cement factories and telephone companies to remain nationalized, not privatized, in order to benefit the local economy and people.

Raymond Joseph, is Haitian Ambassador to the U.S. He was appointed by the U.S. backed interim puppet gov't of Gerard LaTorture. Joseph, who is the uncle of rapper Wyclef Jean, spoke of Haiti's "proud" and "opulent" heritage during the period of slavery when Napoleon Bonaparte's sister had her palace in Port-au-Prince.

If Aristide and Lavalas' plans for Haiti had gone forward, who knows, perhaps the scope of the earthquake disaster would have been lessened. But, rather than include Lavalas's voice as a counter balance to the colonial and "entrenched" narrative, Frontline chose to provide a bully pulpit for Bill and Hillary Clinton, Ban Ki Moon, Edmond Mulet, Raymond Joseph, Jean-Max Bellerive and to trumpet the "economic opportunities" and "very low income area" that is Haiti by such luminaries as neoliberal Oxford economist Paul Collier. In Collier's view Haiti is a land of opportunities, no, of course he doesn't mean in the same sense as America is known as "the land of opportunity;" as in people will be flocking to Haiti for a better life, where they will succeed in their chosen field, where they can raise and educate their children to have a promising future. Be for real! What Collier, Bill Clinton and his "twenty" heads of companies and CEOs see is opportunity for the multinational corporations in "agriculture, tourism and especially in manufacturing." The privatization of Te'le'co (the telephone Co.) it turns out, isn't working out too well and labor organizers say that managers "mismanaged the company in order to justify its break-up." As for the plans for Haiti by the "international community," they are just more of the same.

Collier is blunt, writing (PDF), "Due to its poverty and relatively unregulated labor market, Haiti has labor costs that are fully competitive with China." His scheme calls for agricultural exports, such as mangoes, that involve pushing farmers off the land so they can be employed in garment manufacturing in export processing zones. To facilitate these zones Collier calls on Haiti and donors to provide them with private ports and electricity, "clear and rapid rights to land," outsourced customs, "roads, water and sewage," and the involvement of the Clinton Global Initiative to bring in garment manufacturers.

Revealing the connection between neoliberalism and military occupation in Haiti, Collier credits the Brazilian-led United Nations Stabilization Mission in Haiti (MINUSTAH) with establishing "credible security," but laments that its remaining mandate is "too short for investor confidence."

Chantal Laurent is a Haitian-American who blogs about Haiti, socio-economic, environmental and political issues at thehaitianblogger
Related Topic(s): Democracy; Economic; Elections; Frontline; Government; Haiti Earthquake; Infrastructure; Neoliberalism; Occupation; Poverty; (more...) Reform; Trade, Add Tags  (less...)
Add to My Group(s)
Go To Commenting
The views expressed herein are the sole responsibility of the author and do not necessarily reflect those of this website or its editors.