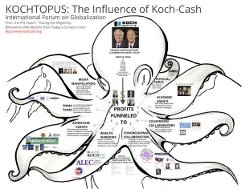 Copyrighted Image? DMCA
Yesterday, one of my extended circle of activist colleagues wrote me in dismay about the long odds facing progressive causes.  His complaint was that few people were attending his classes on environmental/commons dangers, and possible solutions (such as taxing the use/abuse of the commons in the environment).
I pointed out that extrapolating that into general apathy is not accurate - there are literally thousands of progressive groups fighting along similar, if not identical, lines as him.  In fact, Americans are VERY concerned about the environment, about corruption in politics, big money infiltration etc. - all the things he is too.
However, the victories are extremely hard-won, and often fleeting since the corporations and even the wealthy have no expiration date as a whole.
I boiled it down to this: the 1% elite has:
- almost all the money
- almost all the connections
- almost all the power
- focus and coordination on their values and goals.  As George Carlin said, they don't have to meet in a Star Chamber to agree on what to do; they all went to the same schools, followed the same rules, and meet with the same people already.  They already know the playbook.

The 99% has:
- Numbers of people.  Even this is questionable once you really start talking to people about specific solutions.

If we can't agree on at least a broad set of common goals, there is no hope to defeat what Rep. Alan Grayson (below) calls the Kochtopus.  Grayson is currently being smeared by negative ads, though we are many months away from the November elections that Congresspersons must run in every 2 years.  The near constant campaigning that modern congressional representatives must do now is perhaps a subject for another time.  But, the fact is, despite Grayson's pleas for money below, the Koch Borthers can write a single check that would outspend all the contributions from the ordinary contributor twice over, and thanks to rulings like Citizen's United, there isn't even any restriction on the amount they spend - which would be the equivalent for them of buying a cup of coffee for any average American, except that in this case, the cup of coffee is an investment that pays them back several-fold if they get their wish and defeat progressive law-makers like Grayson.  Try getting that with your triple-latte from Starbucks!

And yet....and yet, the Right-wing/High Money crowd was disappointed in the work of Karl Rove, who was unable to put their man Romney into the White House; they have been disappointed in general on their return on investment (ROI) in smaller, local races too.  It really does seem that it takes over-whelming amounts of money to defeat the actual will of the people, maybe it's 10:1?  And, even then, there is no guarantee the ROI will win for them.

Yesterday I explained that vile attack ads already are running against me in my district.

I also said that whoever was running those ads must have money to burn.

Hmmmmm. Vicious, fraudulent negative ads. Money to burn. Who could that possibly be? Can you guess?

They own Koch Industries, which is one of the biggest polluters in America.

The Koch Brothers pledged and spent over $100 million in 2012, trying to defeat President Obama and the Democrats. That was roughly one one-thousandth of their wealth.

In 2012, their front group AFP printed 80,000 door-hangers to distribute in my district, condemning me for voting twice to raise the debt limit. I actually had voted twice against raising the debt limit - on the very bills that they cited. But the Koch Brothers don't care. As far as they're concerned, the truth is whatever they say it is.