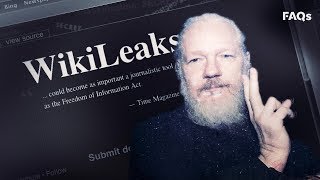 Julian Assange's mother reported yesterday that the WikiLeaks founder has not been permitted any visitors during his detention in Belmarsh Prison, including from doctors and his lawyers. Doctors who visited Assange in the Ecuadorian Embassy have attested that he urgently needs medical care. Belmarsh is a maximum security prison sometimes referred to as "the UK's Guantanamo Bay."

And yet we're asked to believe that this has something to do with an alleged bail violation and a US extradition request for alleged computer crimes carrying a maximum sentence of five years. If you zoom out and listen to the less-informed chatter of the overt propagandists and the brainwashed rank-and-file western mass media consumers, you will also see that people believe this has something to do with Russia and rape allegations as well.

The "crime" Assange is accused of consists of nothing other than standard journalistic practices that investigative journalists engage in all the time, including source protection and encouraging the source to obtain more material. The only thing that has changed is an increased willingness in the White House to prosecute journalists for practicing journalism, and there are an abundance of reasons to believe that he will be hit with far more serious charges once extradited to US soil. They're not going to all this trouble for a bail violation and a five-year maximum sentence.

But if you zoom out even further, in the grand scheme of things this barely even has anything to do with Assange. Sure, he has of course been a thorn in the side of those who operate the transnational western power alliance, and given the choice they would of course prefer him to be locked up or dead than free and alive. But that's not what the corrupt influencers who are strangling our world are shooting for here. They are making a grab for something much, much bigger. Assange just happens to be a stepping stone along the way.

As we've discussed previously, the prosecution of Assange is really designed to set a legal precedent which will enable the US government to imprison journalists for trying to hold it to account using journalism. The reason you are seeing the phrase "Assange is not a journalist" bleated constantly by empire lackeys all around the world today is because they need a counter-narrative for the indisputable fact that this precedent poses a threat to journalists around the world, the argument being that since Assange isn't a journalist (pure bullshit by the way), this isn't setting a precedent for journalists. As though their personal definition of what a "real journalist" is will be the one used by the US government when determining whether or not to prosecute other people for doing things similar to what Assange did, instead of whatever definition happens to suit US government agendas in that instance.

But in order to get the really, really big picture perspective of what these bastards are going for, we need to zoom out even further than that.

In the sci-fi novel Ender's Game, the young protagonist applies a vicious beating to one of his bullies, killing him. When asked why he did this by his handlers, the boy, who has been bred and raised to become a strategic savant, explains that he did it not out of malice toward the bully, nor only to win the fight, but to win all future fights as well. If the kids at school see what savagery he's capable of and know he's not to be trifled with, he won't ever have to fight them.

If this sounds a bit sociopathic to you, that's because it is. And, with the notable difference of the bully and victim roles being reversed, this is exactly the principle we are seeing exercised with Assange.

The entire world is watching what is being done to Assange currently. No matter how propagandized you are, no matter how much you hate the man personally, you're watching that happen and learning a lesson from it. And that lesson is, never do anything remotely like what that guy did, or you'll meet the same fate. This is the real goal of Assange's persecution, and it doesn't impact merely one Australian publisher in a UK jail cell, nor even merely the investigative journalists around the world who are interested in practicing the lost art of holding power to account using journalism, but everyone in the world who consumes news media.

And it works. I know it works because it works on me. I'll say right here and now, if you've got information that incriminates the most powerful people in the world, keep it the hell away from me. Give it to someone else, literally anyone else, because I myself am far too cowardly and have far too much to lose by getting involved in anything that could lead to me rotting in some overseas prison cell. I've got kids. I'm in love. I cannot and will not go down that path. And if this is true for me I know for certain that it's true for countless others as well. They've brutalized whistleblowers to the point that it's surely had a severe chilling effect on those who would otherwise become key leak sources, and now they're brutalizing the journalists who publish those leaks as well. The odds of someone willing to blow the whistle on real power meeting a journalist who is willing to help them are rapidly diminishing to zero.

They're winning this fight against Assange in brutal fashion to ensure that they win all future fights as well.

Which is why it's absolutely stupid that this conversation so often gets fixated on Assange the man, whether it's smears or praise.

The other day I published a massive mega-article attacking the major smears about Assange I've encountered. There are 27 of them in total so far, and I'll be adding more soon. This mountain of smears exists because instead of paying attention to the world-shaping dangers I just outlined which threaten to make it impossible to oppose the leaders of the US-centralized empire who are marching us towards either extinction or dystopia, people are babbling about Assange's personality, or whether or not he cleaned up after his cat while at the embassy.

Related Topic(s): Crime; Detention; Freedoms; Journalism; Julian Assange; Leaks; Prosecution; Truth; Wikileaks, Add Tags
Add to My Group(s)
Go To Commenting
The views expressed herein are the sole responsibility of the author and do not necessarily reflect those of this website or its editors.