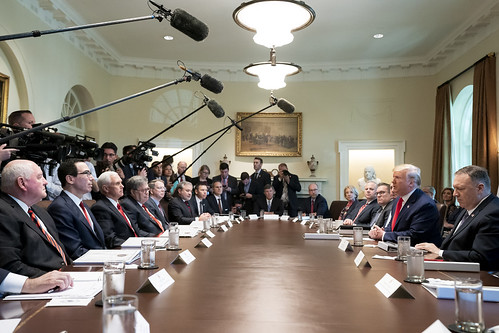 Fox News is celebrating Soleimani's assassination as an American victory. I'm thinking about the members of Trump's cabinet and the role they may have played in deciding to take an action that is clearly an act of war unauthorized by either House of Congress. With the idiots listed below, the only thing that one could expect was a clusterfuck in most aspects of government. It's a miracle that many more disasters have not fully unfolded. But I've been saying since Trump's inauguration that there's an iceberg of unseen corruption, criminality and idiocy that we have not yet seen yet.

We have moron fascist who wants Julian Assange executed, Mike Pompeo for Secretary of State. This is not the kind of leader who stands up to the President when the President is wrong.

We have a corporate hack, and former military industry lobbyist and vice president of government relations at Raytheon Mike Esper, as Defense Secretary, accountable only to the President. This is not the kind of leader who stands up to the President when the President is wrong.

We have notorious liar Attorney General Joseph Barr a religious fundamentalist who puts loyalty to the president above defense of the constitution.This is not the kind of leader who stands up to the President when the President is wrong.

Then there's former hedge fund manager Secretary of the Treasury Steven Mnuchin, who wants to roll back Dodd Frank. He failed to report $95 in assets when he was being considered for the job. This is not the kind of leader who stands up to the President when the President is wrong.

We have oil industry lobbyist Secretary of the Interior David Bernhardt. Wikipedia reports that he violated federal law in the way he moved used cash from national park admission fee. This is not the kind of leader who stands up to the President when the President is wrong.

An anti-science, climate change denying Secretary of Agriculture Sonny Purdue has denied the effects of climate change on weather. Wikipedia reports, " In December 2018, he changed the nutrition standards for school lunches to allow more refined grains, allow milk with added sugar, and increased sodium." This is not the kind of leader who stands up to the President when the President is wrong.

Former investor and fake billionaire (he claimed he was and Forbes proved he wasn't one) Secretary of Commerce Wilbur Ross has the nickname King of Bankruptcy, having presided over eight of the biggest bankruptcies to date, as of 1998. His coal company received hundreds of citations for safety violations and 12 miners dies under his leadership. This is not the kind of leader who stands up to the President when the President is wrong.

Former lobbyist Secretary of Health and Human Services Alex Azar was president of the U.S. division of the Eli Lily and company. He opposes Obamacare and abortion rights. You might think, because he has a history of supporting some regulations that he might stand up to Trump, but health companies like regulations because they use them to shelter them from all kinds of liabilities.

Secretary of Transportation Elaine Chao is the wife of Mitch McConnell. Nuff said.

Billionairess Secretary of Education Betsy DeVos is a fanatic for privatizing schools and has betrayed millions of college students by refusing to credit them for student loan forgiveness and had violated court orders regarding collecting interest on student loans for tuition to for profit, bankrupted company Corinthian Colleges.

Add these up and you have a profoundly disturbing, profoundly integrity and morality impaired cabinet of fools, idiots, narcissists and psychopaths. It is not surprising that Trump went ahead, without consulting with allies, without getting the authorization of either House of congress in his assassination which is tantamount to an act of war. It is a logical outcome of having a Congress that has totally, under the leadership of both Trump Enabler Mitch McConnell and Nancy Pelosi who allowed passage of funding that specifically stripped out controls that would have defunded non-authorized conflict with Iran.

Sadly, our current situation is very similar to what was portrayed in the movie, Idiocracy.

Related Topic(s): Act Of War; Donald Trump; Trump Appointee; Trump Cabinet, Add Tags
Add to My Group(s)
Go To Commenting
The views expressed herein are the sole responsibility of the author and do not necessarily reflect those of this website or its editors.