"Maher: Still afraid of letting go of an illusion?" 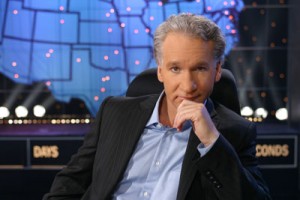 LAST NIGHT'S EPISODE OF BILL MAHER'S HBO comedy show (see below), Real Time with Bill Maher (5.25.12) packed a nice, perhaps encouraging surprise.  At the closing of the show, apparently irritated by the Right's nonstop drumbeat of insane--often cynical--claims that Obama was a dangerous leftist, a foaming-at-the-mouth radical, a Black Lenin bent on imposing tyrannical antibusiness laws, and an agenda that would make Obama one of the most revolutionary presidents in the history of the United States, Bill finally came out and started dissing Obama for his total lack of semblance to the Right's description of the man.

Whether Maher realizes it or not, this was no doubt a much awaited moment among his long-suffering core of real left fans, who have endured numerous instances of Maher's unabashed  Obama boostering, and still managed to keep the faith, always betting that the comedian's undeniable intelligence and decency would one day prevail, forcing him to shake the delusions peddled by the treasonous Democrats.

The road has been hard because Maher, as a result of intellectual laziness or not having quite escaped the bourgeois way of looking at reality, can be anything but consistent. At any given time he can be found anywhere on the political map, from pushing the permissible boundaries of left-liberal discourse and sounding like a socialist to mindlessly plugging Obama in the name, what else?--of that old fear rationale: The Lesser Of Two Evils. (Granted, the astonishing despicability of current Republicans and religious nuts does give many people reason for pause. But in the Kabuki theater of American politics, that's the Republicans' assigned role.) At times Maher --probably out of desperation--also seems to convince himself of that favorite Obamabot delusion--a delusion within a delusion, really--that Hopey Changey is in actuality a brave and genuine leftist merely biding his time to enact a sweeping progressive agenda...if he only gets his second term.

Hope springs eternal, or does it?

The radicals in his audience (yes, Virginia, radicals do have a sense of humor and many do watch Maher) have all along seen promise in Maher.  First for his brave and unwavering anticlericalism in a nation poisoned by priggish obscurantist religiosity.  It takes balls to be an in-your-face atheist in America. Second, for embracing a cause which remains (shamefully) an orphan in left circles: animal defense. (Maher is one of the few, perhaps the only comic who has ever gone publicly against the "sacred right" of humans to derive employment at any cost to nature, or gratuitous animal suffering. In this vein he has blasted baby seal killers, offshore oil riggers and compulsive loggers, arguing that some occupations have no inherent right to exist just because they provide "jobs".  After all, the mafia provides jobs, too, and accountants for the superrich also enjoy lucrative employment.  Get my point? This has not precisely endeared him with labor's bureaucracy--utterly craven and speciesist--nor with practically the entire political class which, in its role as official voice for mainstream opinion, no matter how stupid, depraved or myopic, specializes in cowardly pseudo leadership.  Corporations and wingnuts naturally regard Maher--an outspoken libertine--as a dangerous deviant.  If they had half a chance to get away with it, he'd be gone in an instant.  So Maher, whatever his flaws, is a courageous man who tries to honor his deeply felt convictions. How many celebrities can be described that way?

The old LOTE prison--real or self inflicted?

Maher has been mighty generous with Obama and the Democrats. Besides his constant lambasting and ridiculing of Republicans, he has also put his money where his mouth is, and donated $1 million to the Obama campaign. Now, let's put this in some perspective. It's easy for ghouls like the Koch brothers, or the similarly heinous Richard Mellon Scaife, the secretive godfather of today's rightwing propaganda machine, to give a million dollars or even tens of millions. These men's fortunes are in the billions, and theirs are industrial and banking fortunes--they rest on sturdy ground and reproduce automatically like bad fungus. Maher's net worth--solely product of his professional life-- is far more modest, about $23 million. Hence his donation, which amounts to close of 5% of his entire net worth, is a damn sight more impressive.  Consider, too, that Maher can suddenly find the doors closed, which short of all out revolution won't happen to the ghouls. Proportionally, for the malignant Kochs to match Maher's gift, they'd have to hand over approximately $3 billion. That takes a lot of belief.

Maher has said that this donation of a cool million to the pro-Obama PAC known as Priorities USA Action is "the wisest investment I think I could make."  Perhaps so. There's no denying that entering the big Super PACs game on the side of Obama may afford some advantages. Maher's allegiance to the Dems can be explained as a question of simple survival. Thus, without denying one whit the powerful pull of the LOTE rationalizations, it may be that, as a mainstream, successful comedian operating within the framework of corporate television, Maher needs a safe place where he can plant his flag, something the establishment gatekeepers can chew on and accept, and what better terrain than the Democratic party illusion?  So the increasingly fractured manifestations of LOTE, as seen in this episode, may be inevitable: the man may be a true believer, but only up to a point. The bubbling up of doubts about Obama may become more frequent, and more caustic. All of which is of course salutary.

Hollywood liberals and lefties have criticized Maher for his big-money investment in Obama's reelection. It may be a case of splitting hairs as most resent Maher's participation in a super PAC but not his support of Obama (the incumbent is widely popular in the movie colony). At bottom this is more a squabble over methods than goals. Reported the L.A. Times on Feb 24th:

"This to me is one of the worst things to have happened this election cycle," [Rob] Reiner said on the Jan. 13 episode of "Real Time with Bill Maher." "When you think about what's happened in this country in the last year. You have this huge movement with the tea partiers. You have this huge movement with the occupiers. These are disenfranchised people from both ends of the political spectrum who are very angry because they don't have jobs. And they are not going to matter one bit in this election because of all this money that's coming from very wealthy people .... And it's disgraceful.

Reiner's political compass is a bit off the mark  (Tea Partiers were not so much about jobs as about a bunch of idiotic issues), but the criticism reflects the confusion and contradictions that continue to define liberalism in modern America, especially in rarified circles such as those of Hollywood celebrities.

Assuming the mantle of a comedy giant like George Carlin is a tough call, considering the late comic's longstanding alienation from the system, a vision that became extremely cogent, refined, and mordant in the closing decades of his life.  Americans, who imbibe most of their "reality" via television, need voices like Carlin's, people who can tell it like it is, brilliantly and unapologetically. These days the pickings are slim. Only two contenders--among white comics-- may have the astuteness and defiance to make it fly, and approach the departed master. One is certainly Stephen Colbert, the other Bill Maher.  The former specializes in playing dumb, using a form of "inverted" satire to hurl his brickbats. Maher delivers his criticisms and insults with humor but more or less straightforwardly. It would be wonderful if both figures came out more forcefully against the illegitimate status quo but that may be too much to hope for as long as they remain embedded in the corporate gravy train. However, both men are still relatively young and in evolution, and both are courageous and passionate. The latter quality may make their comedy increasingly bolder as more and more criminal dysfunctions accumulate and decency compels them to look at the monster without the usual excuses.

Maher's outburst last night may be a harbinger of more explosions in the same direction. It's obvious he's becoming (if he wasn't all along) more keenly aware of Obama's huge betrayals and endemic Democratic party cupidity. His repressed anger and clearer vision may manifest itself in new forthright denunciations of the "Lesser Evil."  If so, he may yet come to fill the spot left vacant by Carlin, a great comedian but also a great political educator, and become a truly transformative voice for a public lost in false realities.

Media critic and former economist P. Greanville is The Greanville Post's founding editor (http://www.greanvillepost.com/). He also serves as publisher for Cyrano's Journal Today. He has a lifelong interest in the triumph of justice and (more...)
Related Topic(s): America; Comedy; Comedy; Liberals; Satire; Satire; Treachery; Wingnuts, Add Tags
Add to My Group(s)
Go To Commenting
The views expressed herein are the sole responsibility of the author and do not necessarily reflect those of this website or its editors.