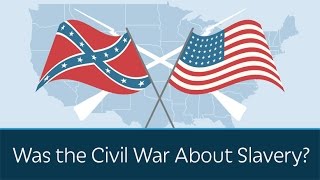 Was the Civil War About Slavery?
(Image by YouTube, Channel: PragerU)   Details   DMCA

Today (Nov. 9) I heard a black historian on NPR say that the "civil war" was fought in order to establish a framework for human rights.

He also said that black civil rights achieved by the war were overturned by the rollback of Reconstruction, put back in place by the 1964 Civil Rights Act, and was now being overturned again by Trump's response to the caravan from Honduras.

As best as I could tell, this was an Identity Politics explanation of history with all of its contradictions and factual errors.

The black historian can't have it both ways.

Moreover, how would the black historian explain how it possibly can be that the same Union army that fought to bring human rights to black slaves immediately on war's end was sent under the same generals, Sherman and Sheridan, to slaughter the Plains Indians. Why did the Union army fight for human rights for blacks and against human rights for native American Indians?

As every competent historian knows, there was no "civil war." A civil war is when two sides fight for control of the government. The southern states had seceded and formed their own country. The Confederacy had no interest in controlling Washington. The war happened because Lincoln invaded the Confederacy. The Confederacy fought because they were invaded. The North fought to maintain the Union, as Lincoln said repeatedly. The South seceded because the Northern majority in Congress passed a tariff that benefited the North at the expense of the South. Lincoln guaranteed the South permanent protection of slavery if they would stay in the Union, but did not offer to repeal the tariff. Historians have studied the diaries and letters of soldiers on both sides, and can't find anyone who was fighting over slavery. Lincoln said that blacks were not sufficiently developed to live in society with whites. His plan was to send them back to Africa, which might have happened, as the North didn't want them, if Lincoln had not been assassinated.

Under the Reconstruction that the North imposed on the South, the South was divided into five military districts in which civil rights for whites were scant and their property was stolen by carpetbaggers and scalawags as whites lacked the protection of law and self-government. The vindictive Union simply reversed the roles of black and white to the extent that they were able.

As Lawrence Stratton and I show in our book, The New Color Line, despite the 1964 Civil Rights Act's prohibition of racial quotas, the Equal Employment Opportunity Commission established quotas as the EEOC's method of enforcement. A quota regime is a grant of privilege to those "preferred minorities" favored by the quota system, and privilege is a violation of the 14th Amendment's requirement of equality under the law.

Everything I have said in this short essay is factual and can be easily ascertained. But we have a black historian on NPR who thinks whites are racists but fought and died in order to bring human rights to imported blacks but not to native Indians, and who has no idea of the oppressiveness of Reconstruction (sometimes called Radical Reconstruction) or the violation of the 14th Amendment and the intent of Congress by the EEOC.

As I have emphasized over the years, Americans live in a matrix of misinformation in which facts, and history itself, are disappearing. Emotion, not reason, rules. We now have a mob, Antifa, that has introduced physical violence into politics. Those who control the explanations denounce Trump and Tucker Carlson, not Antifa's violence.

It is easy to see where this is going.

Related Topic(s): Antifa; Civil War; Generals; History; Slavery; South, Add Tags
Add to My Group(s)
Go To Commenting
The views expressed herein are the sole responsibility of the author and do not necessarily reflect those of this website or its editors.