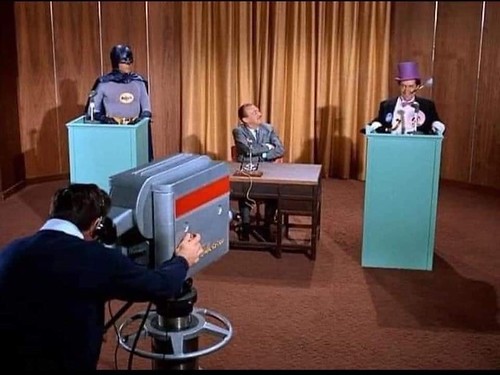 "It's the greatest economy in the history of the country."

"It's not your economic expansion, it's ours. We started this after the deep recession of 2008 and it's still going on. You've been getting a free ride for three years."

"It would have been double the number if you had been president. I sealed off our borders; you were against it."

"Gentlemen, I am the moderator. The subject is still the economy."

And so it went on. The participants ignored the moderator and the 'I-did-you-didn't' continued. Not much can be said about the first presidential debate and there are two more before the election on November 3.

Whenever he had the chance, Joe would go off on a rehearsed speech, which would be promptly cut off by a Trump with zero interest in decorum. He dominated the debate, the moderator and, sadly, Joe.

If Trump is a relatively inactive president, except where it might help his re-election, then there is one benefit: no wars. His tax cuts are permanent for corporations but expire for individuals in 2025 i.e. when Trump eventually leaves office if he is re-elected.

If backroom boys fronting for moneyed interests picked candidates in the old days, they also had any eye on electability. In the more transparent primary system, money still helps particularly with TV advertising. Trump uses his own money and therefore is not beholden to anybody. He is his own man, and that is important for his supporters. For his detractors it makes him dangerous, a loose cannon unrestrained.

At the end of a debate, both sides usually claim victory. But the polls taken shortly after tell the real story. One thing for sure, America lost. This undignified spectacle where a challenger tells a US president, "Shut up, man" makes a laughing stock of the country.

A couple of days after the debate, the general consensus is that Biden won the first debate. So did Hillary Clinton in 2016. How people vote is a different matter. It's a mixture of likeability, comfort level, perceived competence and perhaps character although the last often takes a backseat. Nobody is perfect they say and politicians least so.

Just a little over four weeks to the election and the choice is between an egomaniac and a man who doesn't mind his offspring making a buck or two through his influence.

P.S. Since this piece was written, the President and the First Lady have tested positive for the coronavirus. Everyone wishes them a speedy recovery.

Arshad M Khan is a former Professor. Educated at King's College London, Oklahoma State University and the University of Chicago, he has a multidisciplinary background that has frequently informed his research. He was elected a Fellow of the (more...)
Related Topic(s): Presidential Campaign Democratic; Presidential Democracy; Presidential Election 2020; Trump, Add Tags
Add to My Group(s)
Go To Commenting
The views expressed herein are the sole responsibility of the author and do not necessarily reflect those of this website or its editors.