Click Here to Remove All Ads
Cross-posted from The Guardian
That the US is objectively "the greatest country ever to exist" is as irrational as it is destructive, yet it maintains the status of orthodoxy 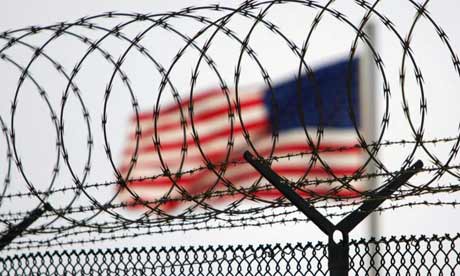 (Image by Unknown Owner)   Details   DMCA
A US flag waves within the razor wire-lined compound of Camp Delta prison at Guanta'namo Bay in 2006. Photograph: Brennan Linsley/Pool/Reuters

Last week, North Korea tested a nuclear weapon, and the US -- the country with the world's largest stockpile of that weapon and the only one in history to use it -- led the condemnation (US allies with large nuclear stockpiles, such as Britain and Israel, vocally joined in). Responding to unnamed commentators who apparently noted this contradiction, National Review's Charles Cooke voiced these two assertions:

He followed that with this:

Nobody can reasonably dispute that North Korea is governed by a monstrous regime and that it would be better if they lacked a nuclear weapons capability. That isn't what interests me about this. What interests me here is that highlighted claim: that the US "is the greatest country in world history," and therefore is entitled to do that which other countries are not.

This declaration always genuinely fascinates me. Note how it's insufficient to claim the mere mantle of Greatest Country on the Planet. It's way beyond that: the Greatest Country Ever to Exist in All of Human History (why not The Greatest Ever in All of the Solar Systems?). The very notion that this distinction could be objectively or even meaningfully measured is absurd. But the desire to believe it is so strong, the need to proclaim one's own unprecedented superiority so compelling, that it's hardly controversial to say it despite how nonsensical it is. The opposite is true: it has been vested with the status of orthodoxy.

What I'm always so curious about is the thought process behind this formulation. Depending on how you count, there are 179 countries on the planet. The probability that you will happen to be born into The Objectively Greatest One, to the extent there is such a thing, is less than 1%. As the US accounts for roughly 5% of the world's population, the probability that you will be born into it is 1/20. Those are fairly long odds for the happenstance of being born into the Greatest Country on Earth.

Related Topic(s): American Exceptionalism; American Foreign Policy; American Hypocrisy; American Military; Korea; Power, Add Tags
Add to My Group(s)
Go To Commenting
The views expressed herein are the sole responsibility of the author and do not necessarily reflect those of this website or its editors.