Attempts at publicity should always be followed through: too many people are watching. 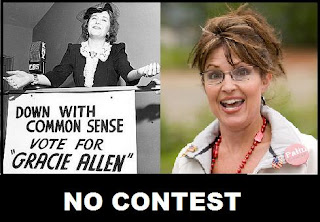 In the early spring of 1940, Gracie Allen was sitting calmly at home with her family in Beverly Hills. She thought for a moment and suddenly looked up. "You know, I'm tired of knitting this sweater, I think I'll run for president," she said.

Sarah Palin could surely get out of jury duty. but it seems a convenient reason as to why her tour has been postponed: she can claim civic duty while regrouping and restructuring. And restructuring is obviously in order, because America has queried why she did her magical mystery bus tour in the first place: if it was purely for publicity, it was done so poorly and without any real planning, that public curiosity was the only thing fueling it. And the public quickly found out that the "tour" had no focus: was it to support candidates? Was it a prep to run in 2012? Was it to learn history? Was it to teach history? And what was the "We the People/Constitution" logo for?

Or was Palin just trading in on celebrity?

The criticisms of the Barracuda being a diva and egocentric are magnified by the kind of "this sucks, I quit" situation AND THE ADDITIONAL CANCELLATION OF A VISIT TO SUDAN: she was supposed to attend an Independence day fest with pals Franklin Graham and Greta Van Sustern. Graham is still pushing on, perhaps because he is doggedly determined to keep a Christian Right stronghold in Africa, capitalizing on the Christian persecutions there.

So even if Palin substituted "postphone" for "quit" in her tour lexicon, she's still looked upon as a person for whom "finishing the job" is not applicable.

GRACIE ALLEN DID IT BETTER

Looking back, Palin started being a political half-quit during the McCain-Palin candidacy when she separated from the campaign. She called it "Going Rogue" while the country could have called it "Going To Walk Out." It was the first sign that maturity wasn't part of Palin's makeup. It was also the first sign that she was going to use publicity - at whatever the cost, in whatever direction she chose fit.

That sort of celebrity for celebrity's sake was used to great effect by people like Zsa Zsa Gabor who realized that she had a talent just for being ... famous. But Palin has barreled through fame with little talent, much less planning or thought or research. Much like her writing.

But to give her her due, she has been entertaining. Now it's up to us to ask: was all that entertainment worth it?

Another woman in history campaigned for President with the eye for publicity just as Palin has, but her sole purpose was publicity, everyone knew it, and everyone laughed with her: Gracie Allen.

Gracie's campaign for the Presidency was simply a publicity stunt for the Burns and Allen radio show so popular in the 30s and 40s. It was also simply brilliant: just out of the Depression, the country needed to take a look at politics with broad satire, benign lunacy, dizziness and twisted reasoning.  Perhaps the best comparative statement to Palin's "quit-to-itive-ness" is this gem:

All the other candidates are making speeches about how much they have done for their country, which is ridiculous. I haven't done anything yet, and I think it's just common sense to send me to Washington and make me do my share.

The strategies of Allen's campaign were comic gold: her party was the Surprise Party and when asked why, she explained that her mother was a Democrat, her father a Republican, and she had been born a Surprise. Her Party mascot was a Kangaroo because her slogan was "It's In the Bag!" One of her plans for government was to put Congress on a commission basis: whenever the country did well economically, Congress would get ten percent of the take (like a talent agent).* Another idea was to extend Civil Service to ALL branches of Government because "a little politeness goes a long way."**

HONESTY: As I look...at all these trusting and loving faces...tears come into my eyes...and if you must know why...it's because my girdle is killing me.

I stand before you tonight a simple, plain woman... which is not my fault, but the beautician can't take me till tomorrow.

STATESMANSHIP: Let's all put our shoulders to the wheel and push the Ship of State further into the mud.

ON THE ECONOMY: (Today's Republicans would love her for this) This used to be a government of checks and balances. Now it's all checks and no balances.

and... We should be proud of our national debt! After all, It's the biggest in the world!

SAGE ADVICE TO POLITICIANS: Keep up your morning exercises, because every politician must be able to keep both feet on the fence with his ear to the ground.

MISOGYNISTIC BUT TRUE:  Everybody knows a woman is better than a man when it comes to introducing bills into the house.

Her 33-city whistlestop train tour (bus tours today are apparently more grueling) culminated in the Surprise Party's national convention in Omaha, NE. Thousands of "delegates" flocked to the convention where Gracie was unanimously nominated. There was no vice-presidential candidate on her ticket, however, because she said she would "tolerate no vice" in her administration. Later, at the request of Eleanor Roosevelt, she spoke at the Women's National Press Club in Washington.


For all her campaign efforts, Gracie Allen - as a write-in candidate - garnered 43,000 votes against Roosevelt and Wendell Wilkie,  bigger ratings for the Burns and Allen  radio show and t he endearing love of the entire country.


Sarah Palin can't do better than that.


*Actually, not a bad idea.
** Republicanism not withstanding

Rev. Dan Vojir is has been writing/blogging on religion and politics for the better part of ten years. A former radio talk show host (Strictly Books " Talk America Radio Network) and book publisher, Dan has connected with some of the most (more...)
Related Topic(s): Gracie Allen; Presidential Campaign Republican; Sarah Palin; Sarah Palin And Her IQ; Satire, Add Tags
Add to My Group(s)
Go To Commenting
The views expressed herein are the sole responsibility of the author and do not necessarily reflect those of this website or its editors.