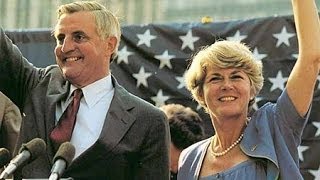 Geraldine Ferraro became the first woman to be named a vice presidential nominee on a major party ticket in 1984 when Walter Mondale chose her as his running mate. Maureen Dowd reminisced.
(Image by YouTube, Channel: PBS NewsHour)   Details   DMCA

It gives me no joy to say "I told you so." Maybe a bit of personal satisfaction, but I'll deal with that.

From time to time, in this era of constant chaos known as the Trump Administration, I have lamented that it is virtually impossible for those who comment on the news of the day to write about anything but the Drumpster. The fact that he lies constantly, is monumentally inept and psychologically unfit for the Oval Office only adds to the need for constant daily attention. It is exhausting and, ultimately, depressing. And this, I have said, could eventually scramble the brains even of veteran journalists who still do it fulltime for a living.

Cases in point, Maureen Dowd and David Brooks. One on the left, one on the right. On a recent Sunday, the New York Times played it right down the middle.

On Aug. 9, I decided to peruse the Views section, once my automatic go to, but for some time now a repository of more of you know what about you know who. The psyche needs a rest. Having had one, I skipped to Dowd in the back, leaving Brooks' rare front-page splash for later.

Dowd has been nothing if not devoted to telling us how awful and dumb Drumpf is. She does it well. I enjoy her writing. But on this Sunday she had to write about Democrats and that part of her brain apparently was fried from all the juice emanating from the Republican side.

But then Dowd wrote: "It's hard to fathom, but it has been 36 years since a man and a woman ran together on a Democratic Party ticket. To use Geraldine Ferraro's favorite expression, 'Give me a break!' "

I'll take it, Alex. Who were Hillary Clinton and Tim Kaine in 2016?

Correct, Bob! Hillary Clinton chose Virginia Senator Tim Kaine as her vice presidential running mate in July 2016. And that was the last time a man and a woman ran together on the Democratic Party ticket.

How soon we forget. Dowd was so focused on the number two pick, she forgot all about Clinton clobbering Trump by several million votes and still losing the presidency a mere four years ago. Dowd wrote about all the biases Ferraro faced as the first female vice presidential candidate and projected that Biden's choice would have to be prepared to be portrayed as too bossy, too bitchy, too aggressive, too ambitious, etc.

Of course, those are all things that were said about Clinton a mere four years ago when she ran, not for vice president, but for president. Real history. She won and she had it stolen from her as I recall.

Kamala Harris, Biden's eventual VP pick, will probably be able to handle all those attacks, in part because she's highly competent, but also because Clinton already handled them, as I said, four years ago. Maybe Dowd can make it up to Hillary in a future column, but I submit that that's what covering Drumpf 24/7 can do to you

As for the conservative Brooks, he chose to take on the question of "Where Do Republicans Go From Here?" He's not sure other than that, however many smart conservatives work on renovating it, Trump's impact on the party will last for decades. And he puts the party's future in the hands of four Republican senators in their 40s: Marco Rubio, Josh Hawley, Tom Cotton and Ben Sasse.