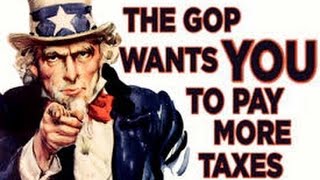 There's something about taxes that elected Republicans know, but most Americans are completely unaware of. It's the reason we keep falling for the perennial GOP tax scam, and Paul Ryan, Mitch McConnell, and their buddies in the White House are getting ready to run this ruse on American working people all over again.

Here's how it works.

If you're part of the top .1% -- say you're earning a million dollars a year -- and you get a tax cut, you'll keep more of the money you're earning. The main reason is because people in those income categories 1) generally have a high degree of control over their own income; and 2) they more often than not already are working under a massive tax cut -- at least a lower tax rate -- called the capital gains tax. But even setting aside Part II of that, truly super-high income earners, like the banksters on Wall Street or CEOs of large corporations, have a significant measure of control -- if not total control -- over their own income.

For working people, it's an entirely different story.

Let's say for the sake of argument that I'm a super-wealthy entrepreneur and I own the company you work for. While I can set my own paycheck (within the parameters of money available to the company), I also set your paycheck. But that's largely a "market function" -- that is, I pay as little as possible for the right talent to get the work done.

As the company owner, let's say that I've set my own salary at $1 million a year, which means I'm taking home around $500,000 a year at a 50% tax rate (of course, taxes are progressive, but that's not relevant to this argument as Republicans want to "cut taxes for all income brackets," so for simplicity sake let's assume the "flat tax" Republicans say they love so much).

Now, what happens if Democrats come into power and say that they want to build a national high-speed rail system, and need to raise taxes to 60% to do it. What happens to my pay and to yours?

For me, my net take-home income goes down from $500,000 to $400,000 a year, but I can easily fix that by simply increasing my pay to $1.2 million. After all, this is a billion-dollar company, and a little bit here and there for me and my executives is no big deal.

But you -- and anybody else doing the particular job you're doing -- still need $50,000 take-home pay in order to live. So if your taxes go up, and I want to keep you as an employee, I'm going to have to raise your pay by enough to keep your take-home even.

This is also why high-tax countries pay higher wages (and have better public services, paid for with those taxes). In Denmark, for example, the average full-time MacDonald's worker earns around $45,000 U.S. equivalent, although about 40% of that goes to taxes to pay for the national health-care system, one of the world's best school systems, and high-quality high-paid police who treat Danes with respect.

On the flip side, what happens when Republicans come into power and decide to cancel the government expenditures and "return people's income to them" by lowering taxes? Let's say they drop the tax rate from 50% to 25% (Reagan actually dropped the top rate from 74% to 25%). What happens to me and you?

Related Topic(s): Corporations; Inequality; Taxes, Add Tags
Add to My Group(s)
Go To Commenting
The views expressed herein are the sole responsibility of the author and do not necessarily reflect those of this website or its editors.