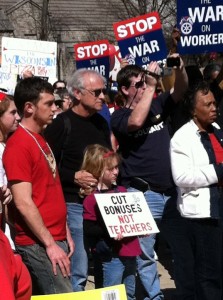 The Atlanta "Stop the War on Workers" rally at the Capitol was attended by about 300 pro-union supporters and about 35 Teabaggers across the street. Their signs displayed the typical grammatical errors and Glenn-Beck-inspired messages warning against "The Kenyan's" attempt to kill our grandparents and install a Soviet-style government.

The irony is, these working-class zeros should thank a union for fighting for their right to have a 40-hour, 5-day workweek that, in turn, gave them the ability to attend a Saturday anti-union counter-protest. Kinda boggles the mind when you contemplate the irony.

Keith Olberman gets it, and wrote about it quite brilliantly at his new blog. Keith nails it when he says...

Killing off high-speed rail projects and the infrastructure and automobile-alternatives and jobs they create is something of a fetish for Neanderthals like Walker, and his slicker cousin Governor Kasich of Ohio, and his unbearably smug fellow traveler Governor Christie of New Jersey. Their elections were bought and paid for by big corporations with one purpose in mind: stop spending government money on anybody except rich people.

Watching Wisconsin unfold is like watching Tahrir Square earlier this month, and last. Well, it would be, except the television networks -- for whom this is a) far too complicated, and b) far too troubling to their corporate bosses -- are treating it like it was a dispute over which Green Bay Packer really should've gotten the Super Bowl MVP award, or not treating it at all. Even the news that the Wisconsin Republicans tried to lure the Democrats back in-state by threatening to vote on a heinous voter-caging bill has been ignored for a little more on Charlie Sheen or his Libyan counterpart.

Please give Keith's new site, FOK News (Friends of Keith), a look and send him some love. 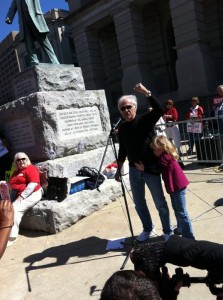 Kathy never expected a career in radio as a talk show producer. Born and raised in Atlanta, Georgia, Kathy was completing her nursing degree when in 2001 - in an emergency - she was asked to fill in as the producer of Mike's program. Within a few (more...)
Related Topic(s): People Power; Rally; Teabaggers; Will Of The People Public, Add Tags
Add to My Group(s)
Go To Commenting
The views expressed herein are the sole responsibility of the author and do not necessarily reflect those of this website or its editors.