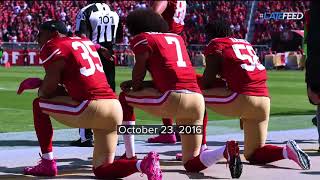 Donald Trump's divisive rhetoric condemning NFL football players exercising their constitutional right to freedom of expression has plunged the country into a social and political crisis. Our fearless leader simply cannot abide those with whom he disagrees having a voice that is contrary to his own.

Former San Francisco 49ers quarterback Colin Kaepernick taking a knee during the playing of the national anthem last season was more than the president could handle. Other players following him was even worse for Trump. And so he did what he always does -- he doubled down. Now whole teams, from 8-year-olds in the peewee league to the Pittsburgh Steelers, Buffalo Bills and others, are either kneeling a la Kaepernick or are refusing to even come out on the field during the national anthem.

Trump, a draft dodger who refused to serve his country in any capacity whatsoever during the Vietnam War and who intimated that former prisoner of war John McCain was a coward, is calling for anybody and everybody who does not stand at attention during the national anthem to be "fired."

The whole thing has whipped the country into a frenzy. Kaepernick's protest is an important one. But it shouldn't be the only one. We're overlooking a very important issue -- one that is not solely from Trump's knee-jerk nationalistic patriotism. We saw it through all eight years of the Obama administration and we saw it during George W. Bush's second term, as well.

That's the issue of Defense Department propagandization of national sporting events. You see, the DOD has largely taken over professional sports.

If you've been to a professional baseball or football game anytime in the past decade, you may have noticed some changes. At every major league baseball game, "color guards" representing the most obscure organizations, like the Washington, DC subway system's police department, or the George Washington University campus police, now present the flag, march out onto the field, perform a flag ceremony, and stand there while the national anthem is played.

At some events, military recruits are enlisted right on the field. Reunions of soldiers, sailors, marines, and their families play out in front of a stadium full of fans. It's choreographed patriotism run amok. And who pays for all of this? The Pentagon does.

Arizona's Republican senators, John McCain and Jeff Flake, announced two years ago that between 2012 and 2016, the Pentagon had spent at least $6.8 million for Major League Baseball, the National Football League, and other professional sports to "honor" troops with cheap stunts at sporting events. The details are listed in a published Senate Report.

The McCain-Flake report also notes that the tally could be more than $10 million -- and could even reach $100 million -- if you count the military's marketing deals with NASCAR. The senators call this military marketing "paid patriotism."

The reality is that it's not really the Pentagon that's paying for it. You and I are paying for it. It's our tax money that's going to propagandize the American people at every major sporting event in the country. And it's not just flag ceremonies. The Pentagon is buying things like ceremonial first pitches for recent veterans, club level seats for vets at football games, and airport greetings for returning service members.

I, for one, sincerely appreciate the sacrifice that our veterans make. My dad was a veteran and served during the Korean conflict. But as John McCain says in his report, "We appreciate if they honor men and women in uniform, but not to get paid for it. If the most compelling message about military service we can deliver is the promise of game tickets, gifts, and player appearances, we need to rethink our approach to how we are inspiring qualified men and women to military service."

Related Topic(s): Activism; Constitutional Rights; Football; Pentagon, Add Tags
Add to My Group(s)
Go To Commenting
The views expressed herein are the sole responsibility of the author and do not necessarily reflect those of this website or its editors.