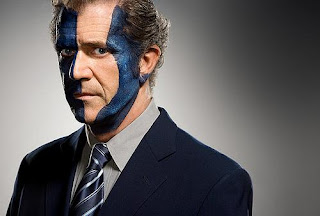 Focusing On Gibson's Other Phobias

Before there was his misogynous rant "

Before there was his racism "

Before there was his anti-Semitism "

There was the El Pais interview:

Mel Gibson's outbursts have always attracted attention, but his most recent rants have exploded exponentially: everything viral on the net was overshadowed by the news that filmdom's enfant terrible had eclipsed his last "lapse in judgment" - drunken remarks blaming "The Jews" for everything. His (tacit) admission to domestic violence, his use of the "N" word, his verbal abuse of the mother of his child left most of his friends and colleagues with no reason to support him. People are asking each other, is this the end of his career? 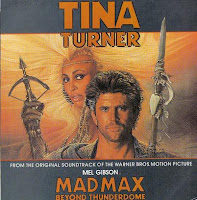 However, my question is: how did we ever let it get this far? Yes, WE. The signs of an angry, bigoted and volatile personality were there long before his DUI in 2004. Looking back at all of the words and actions of animosity towards so many people, it's a wonder that his career both as an actor and as a director hadn't fizzled out twenty years ago. Put it this way: Mel Gibson was hired by the American public to entertain them. He did. But somewhere along the way, he opted to become an icon, a public personality as well as an actor. Maybe it was his stint at directing that made him realize that he could have power/control not only over a film, but over other people's lives. But in spite of his phobias, his errors, his crude and almost violent behavior, the American public still kept Mel Gibson on the pedestal/payroll - maybe because we can't stand seeing our icons walk away in disgrace.

Maybe it's time for America to fire Mel Gibson. It's not like he hasn't expected it. Again, before there were the misogynist and violent rants, there was the anti-Semitism. One of our own OpEdNews diarists has opined that perhaps the "Okasana tapes" are part of an elaborate revenge/conspiracy of Hollywood's Jews as payback for his now infamous DUI rant. (I doubt it - my response). 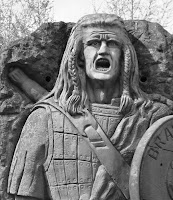 There was the Anglophobia:

English critics saw through the machismo of Gibson's epic, Braveheart. In Colin MacArthur's book, Brigadoon, Braveheart and the Scots: Distortions of Scotland in Hollywood Cinema the author writes that

"... a worrying aspect of the film is its appeal to "(neo-) fascist groups and the attendant psyche."

The word comes from the Latin, meaning "vacant seat', and although Gibson describes himself and his father as "traditional Catholics" his actions and views have leaned heavily towards this almost heretical view of the Catholic Church. Recently, Gibson had a full-scale church built on his land in Malibu, ensuring that the Catholic masses he attends will be said in Latin and that all of the old rites will be preserved. Sedavacantists disdain the "modernism" that took hold of Christianity after pope Pius X and rarely if, if ever, recognize any progress in the Church past Pius XII. Gibson's father, Hutton, is a writer and apologist of Sedavacantism.

There was "The Passion":

All the "miracles" surrounding Gibson's singular magnum opus, The Passion of the Christ, stood in contrast to Gibson's cavalier treatment of scriptures and scholarship regarding the Life of Christ and the the political climate of first century Roman Judea. Perhaps more than any other time, it was then Gibson enjoyed projecting his beliefs on the screen while cloaking them in sacred religion: his anti-Semitism and Sedavacantism became increasingly evident as time went on. He was on a mission to show Jesus the Christ as Mel Gibson saw Him. The sources Gibson relied upon the most were also in question: two nuns, one, the stigmatic German nun Anne Catherine Emmerich (17741824), another a Spanish nun named María de Ágreda (16021665). Although he had several scholars on the set, their scholarship was always laid aside in deference to these two. To Mel, mysticism trumped scholarship.

Mel probably thought of himself as something of a mystic in his translation of The Passion to the screen, else why would he forego scholarship and jumble the scriptures?

There was his alcoholism and bi-polar disorder.

Being bi-polar (a late diagnosis and an even later admission) is one thing, but being bi-polar and alcoholic is a recipe for disaster. Gibson himself admitted that he started drinking at the age of thirteen and that while making his early films, he put away six pints of ale for breakfast. (!). He also admitted to thoughts of suicide. The peaks and valleys of being bi-polar took their toll on everyone around Gibson.

Defenders of Gibson have cited his bi-polar condition as a possible trigger to his rants. However, doctors familiar with bi-polar disorder have not been quick to chime in. Some have gone so far as to suggest a form of psychotic break. And if his violent tone had been caused by his disorder, Oksana would have not have been quite as defensive.

And then there was ... Hutton Gibson.

Hutton Gibson's views as a Holocaust denier are well known. And because Hutton has a forceful personality like his son, it would have been almost impossible for the son not to have had the same ideas.

Gibson is an outspoken critic of the post-Second Vatican Council Catholic Church and a proponent of various conspiracy theories. In a 2003 interview he questioned how the Nazis could have disposed of six million bodies during the HolocaustSeptember 11, 2001 attacks were perpetrated by remote control.[1] He has also been quoted as saying the Second Vatican Council was "a Masonic plot backed by the Jews".[2]

Perhaps one of the most troubling aspects of Mel Gibson is that there is also a humanitarian behind the manic, xenophobic facade: he and his former wife have been among the chief donors to Healing the Children, he has been instrumental in preserving Costa Rican rainforests and, along with pop icon, Sting, contributed to the fund for the cleaning and restoration of Michelangelo's David.

Gibson, however, has not become a lovable bigot, like some Archie Bunker in Hollywood. His social sins have been too grave. 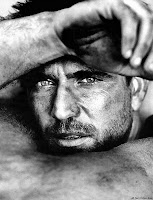 A career that has spanned three decades, filling the public with power and respect has been badly stained by the personal ideologies and exploits of its star. And like it or not, as a celebrity who has willing revealed parts of his personal life, Mel Gibson has taken us through his journey and has exposed us to his some of his ugliest problems: a father who vehemently denies the Holocaust and adheres to the ideologies of Sedevacantism; a history of substance abuse; bi-polar disorder; homophobia; anti-Semitism; racism; misogyny. Click them off in the proper cadence and one might have Gibson's own Stations of the Cross. His "Passion" so to speak. But he has dragged us through these episodes, only sometimes asking for our forgiveness.

In the wake of the taped-rants scandal, Gibson's agent, The William Morris Agency has dropped him. But as his REAL employer, can the U.S. fire him? A kinder separation would be termed "retire."

Then again, maybe that would be too kind.

Rev. Dan Vojir is has been writing/blogging on religion and politics for the better part of ten years. A former radio talk show host (Strictly Books " Talk America Radio Network) and book publisher, Dan has connected with some of the most (more...)
Related Topic(s): Anti-semitism; Bi-polar; Hate-Racism-Bigotry; Homophobia; Mel Gibson; Misogyny; Sedevacantism; The Passion Of The Christ, Add Tags
Add to My Group(s)
Go To Commenting
The views expressed herein are the sole responsibility of the author and do not necessarily reflect those of this website or its editors.