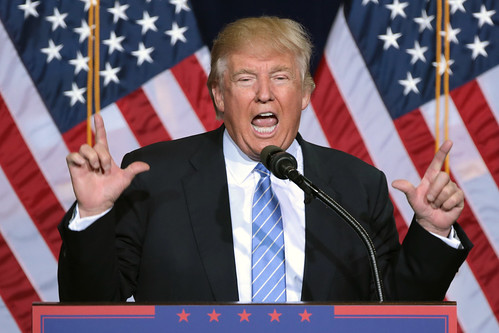 Duluth, Minnesota (OpEdNews) October 1, 2020: Once upon a time, a mighty long time ago now, the American historian Richard Hofstadter (1916-1970) alerted the world in 1963 to the paranoid style in American politics that has long been associated with conservatives in the Republican Party. Briefly, the paranoid style in American politics espouses a strong sense of Us versus Them. Of course, the "Us" may shift. So may the "Them."

In the time of FDR, the infamous radio priest Father Charles Coughlin (1891-1979) was one well-known exemplar of the paranoid style in American politics.

In American politics today, President Donald ("Tweety") Trump is known primarily as the most prominent practitioner of the deliberately divisive paranoid style of Us versus Them.

Because the American Jesuit Renaissance specialist and cultural historian Walter J. Ong (1912-2003; Ph.D. in English, Harvard University, 1955) is my favorite scholar, I will once again advert to his work in the present review essay. Over the years, I took five courses from him at Saint Louis University (SLU). In addition, I took a memorable graduate course in English at SLU from Dr. Raymond Benoit on British Romantic poetry (in the 1966-1967 academic year, but I am not sure in which semester).

Subsequently, Ong did his doctoral studies in English at Harvard University. For his Ph.D. dissertation, he massively researched the history of the verbal arts of grammar, rhetoric, and logic (also known as dialectic) in connection with the pivotal French Renaissance logician and educational reformer and Protestant martyr Peter Ramus (1515-1572).

One consequence of Ong's extensive studies of Western philosophical thought is that he has in his publications a permanent edge in philosophy over his younger colleague in the English Department at SLU, Raymond Benoit, author of the book Single Nature's Double Name: The Collectedness of the Conflicting in British and American Romanticism (The Hague and Paris: Mouton, 1973).

Related Topic(s): American Culture; Consciousness; Culture; God; Jesuits; Logic; Plato; Poetry; Politics; Politics Of Hate; (more...) Spirit; Spiritual; Spirituality; Spirituality; Technology; Trump, Add Tags  (less...)
Add to My Group(s)
Go To Commenting
The views expressed herein are the sole responsibility of the author and do not necessarily reflect those of this website or its editors.