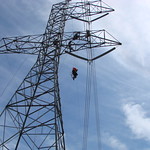 In the wake of California's most deadly ever wild fire last autumn that ravaged the area centered around the town of Paradise, Pacific Gas and Electric (PG&E) filed for bankruptcy in anticipation of its liability for damages partially caused by equipment malfunction. Governor Gavin Newsom is addressing the massive financial burden the company faces while the San Francisco city council is exploring the feasibility of taking over the company's local operations.

In the larger picture of global warming, we are witnessing increasing frequency and intensity of comparable natural disasters of fires, floods and hurricanes where the resulting damage exceeds the capacity of privately-owned utilities to deal with their losses and obligations to the public. In the end, this predicament goes to the very heart of the controversy of capitalism vs.socialism.

All the large-scale utilities industries which support our population and its complex economies today started out as small-scale private enterprises that had to establish a market for their services: the first oil wells; the Edisons of electric power distribution. We attribute the growth of these innovations into the giant industries of today that power our economy and our nation's well-being to the entrepreneurial spirit of capitalism.

That was then. Now, in view of escalating climate disasters, these industries have truly become too big and important to fail us.To operate these vital industries as private enterprises with the primary purpose of private enrichment while serving the public as a secondary purpose, endangers the economy and the health, welfare and basic economic security of the public community. Such is the case where managers neglect factors of safety and pollution, delay security improvements, and are willing to take risks - even absorb affordable penalties for malpractice - to improve profits.

The government needs to step in, instead of leaving quality control of these private industries to self-regulation. If the government took ownership, that may not assure there would be no mismanagement or issues of budgetary limitations, but everything could be subject to public scrutiny, giving public safety and economic stability top priority. Any improvements in operations would benefit the customers (the public), not the pockets of investors. Beyond that, financial liability, as a form of insurance, would be in the public domain and potentially unlimited. All of these factors reflects the true status of these utilities in the modern age as a basic human necessity, like food, clothing, and shelter, under the "commons" concept.*

This line of reasoning leads to justifying the nationalization of all power producing industries, including the polluting oil and coal industries. The public would be best served by quickly replacing them as far as possible, whereas the present private owners seek only to perpetuate them and impede the transition to non-fossil fuel sources.

* See a discussion of this point in a previous article, "America Will Never Be A Socialist Country" .(OpEdNews, 3/5/19)

Related Topic(s): Capitalism; Nationalization; Oil; Pollution; Utilities, Add Tags
Add to My Group(s)
Go To Commenting
The views expressed herein are the sole responsibility of the author and do not necessarily reflect those of this website or its editors.