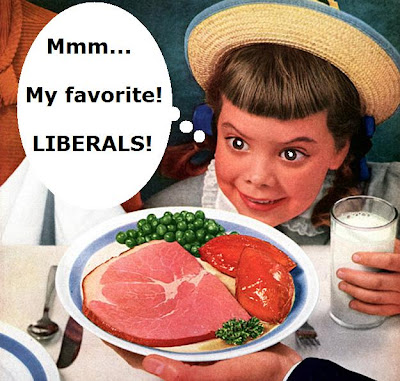 Imagine a country full of home-schooled children who are taught that people who do not believe what they believe, act the way they act, live the way they live deserve to be discriminated against, deported, incarcerated, or worse... Sounds like a B movie filled with tykes whose eyes emit laser beams, vaporizing people they feel threatened by, doesn't it?

Well, that B movie is just the thing envisioned by Bryan Fischer's D-class intellect. The reasoning goes like this: the left has so many pro-choice people, feminists and homosexuals that the right will outbreed them and (insert maniacal laughter) take over the world!

Bryan Fischer of the AFA:

What this means quite simply is that liberals are breeding themselves out of existence ... All this represents a marvelous opportunity for conservatives. We can regain political control of this country by simply following the biblical mandate to "be fruitful and multiply and fill the earth."

Of course, the thought never occurred to Fischer that some gays, feminists and pro-choice people might be bred in the process, because true Christians NEVER have gay, pro-choice or feminist children. Note to Fischer: breeding to outnumber doesn't guarantee complete extinction, unless you couple overbreeding wityh conscious genocide - the kind that your friends want in Uganda (and Zimbabwe and Texas).

And those conservatives he speaks to, none of them are "on the dole" are they? Popping out kids for the sake of a political population explosion means that the parents better have the means to support them. Fischer is a typical pro-lifer who confuses being "pro-birth" with "pro-life." After the infant gets slapped on the butt and cries, Fischer doesn't care what happens to the kid. Pay for those kids? Their homes, their food, their clothes, their education? Don't be ridiculous! Once that kid is born, the parents have to make do. Let them shell out for Fischer's beliefs. After all, that's the American way! And if the kid winds up becoming a criminal on death row, well, Fischer will never attempt to stay his execution. So it's pop kids out as fast as possible, imbue them with as much hatred for liberals as you possibly can, hope they survive to voting age, then sick them on an unsuspecting Congress (OK, the last may not be very hard to do). Pretty cool idea, huh?

The Quiverfull movement espouses having as many children as possible, faithfully following the dictum "Be friutful and multiply." If every child is a "gift from God" then the movement's followers can be viewed as somewhat greedy. But according to some, Quiverfull people are more than greedy for "gifts from God", they are "culture warriors":

If this militaristic stance seems familiar, look back to evangelical leaders like Rod Parsley and Lou Engle. Their sermons are filled with militaristic jargon that would make a general proud. The unfortunate thing about religious militarism is that too many congregants react eomtionally and physically to it.

And the militarism is most effectively used on children from day one. Breeding little armies is very "fruitful". One of the most blatant examples of "breeding for God" has been cable TV's Duggar family. The family's promoting over-population to such an extent that one wonders about the parents' motives: are they supporting the kids or are the kids supporting them? 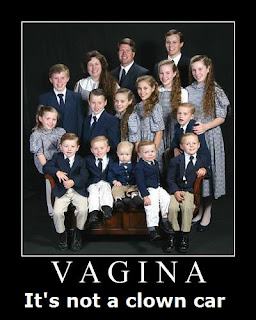 Rev. Dan Vojir is has been writing/blogging on religion and politics for the better part of ten years. A former radio talk show host (Strictly Books " Talk America Radio Network) and book publisher, Dan has connected with some of the most (more...)
Related Topic(s): American Family Association; Baby Boom; Bryan Fischer; Culture War -s-; Duggar Family; Family Research Council; Food Stamps; Fundamentalists; Hypocrisy; Militarism; (more...) Pro-choice; Quiverfull; Religious Right; Right Wing Hypocrisy, Add Tags  (less...)
Add to My Group(s)
Go To Commenting
The views expressed herein are the sole responsibility of the author and do not necessarily reflect those of this website or its editors.