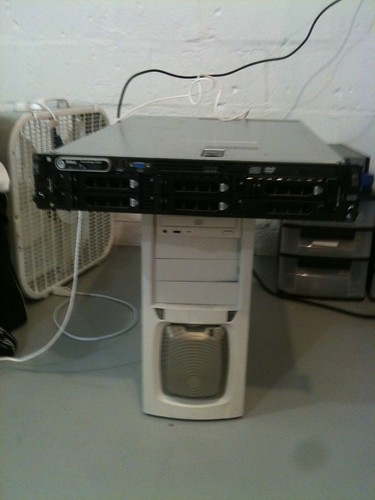 Where is the DNC server hiding?
(Image by drewgstephens)   Details   DMCA

The NY Times has helpfully published the entire unclassified (by the president) memo of Trump's call to the Ukraine. They even highlighted certain passages they felt are important.

Here is the 3rd passage highlighted:

Yet the Times, in their sidebar, interprets this section of the call thusly:

3 Mr. Trump said Attorney General William P. Barr would call the Ukrainian president about another investigation. Mr. Trump appears to be referencing an unsubstantiated conspiracy theory pushed by Rudolph W. Giuliani, the president's personal lawyer, that Ukraine had some involvement in the emails stolen from Democratic National Committee.

This is a strange redirection to a very material couple of points by the president. Trump is referring to the DNC server (Hillary Clinton had a separate server with her emails on it too, but that does not seem to be the one in question here) and to Crowdstrike, which did research for both the Democratic National Committee, first, and then the Republican National Committee. If the server did indeed wind up in war-torn Ukraine, especially back shortly after the 2016 hack (which many, including jailed Julian Assange and The Nation magazine, believe was really a leak by an insider), it would be both curious and alarming. Why hasn't the Times, or any media outlet, drawn attention to this aspect, choosing instead to frame the story about Biden and his son?

Indeed, the president does not bring up Biden until much later in the conversation:

Trump clearly refers to "The other thing," meaning Joe and Hunter Biden. They are separate topics to Trump. Why are they being treated as if it was the same topic? Why is only Biden and his son fair game for news coverage, and now, impeachment proceedings?

I wrote to the NY Times Reader Center about this in the online form for that purpose. The Times states explicitly that, due to the volume of mail they receive, I should not expect an answer (it apparently doesn't matter that I've been a paid subscriber since they started charging for access nearly a decade ago). It'll be interesting to see if they cover this additional aspect in future articles. Someone should. The fate of the DNC server has been a nagging mystery ever since the investigation of it. If it is truly in the Ukraine, or even if the president had reason to think it was, it should raise a number of questions, some of which may be even more important to the future of the country than the Biden affair, if there even is one.

Related Topic(s): Assange; Dnc Server; Trump Attacks Impeachment; Trump Attacks Joe Biden; Trump Foreign Policy, Add Tags
Add to My Group(s)
Go To Commenting
The views expressed herein are the sole responsibility of the author and do not necessarily reflect those of this website or its editors.