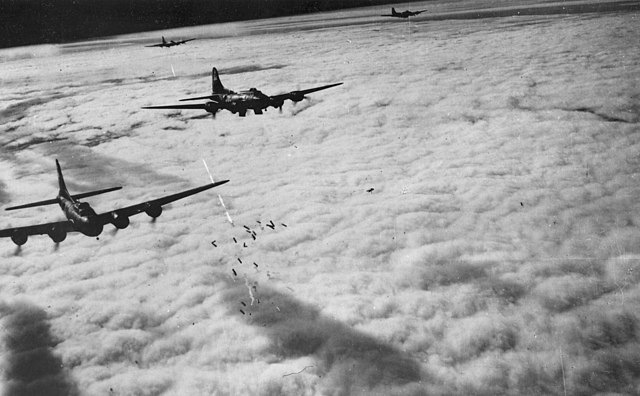 My earliest memory of the Second World War is a nighttime bombing of Berlin when I was still young enough to be carried. A man, not my father, had me in his arms as he ran, my mother in full trot beside him. The air was full of burning cinders, countless brightly glowing bits of fiery orange that swam and danced and whirled above and around us. My mother swatted the embers briskly when they landed on me. I howled not from fright but from her energetic whacks.

The Royal Air Force introduced terror bombing specifically to destroy the will of the people. They came chiefly at night. Military historian John Keegan characterized the RAF's decision as having "descended to the enemy's level."

Harris had as his personal goal the virtual annihilation of the German civilian population, leaving just enough population and infrastructure for an agrarian state. His ally in the attempt was Lord Cherwell who energetically lobbied for an ever-increasing effort in urban saturation bombing. Harris unsuccessfully sought 4,000 bombers to get the job done.

Historian Martin Middlebrook wrote that "in some ways area bombing was a three-year period of deceit practiced on the British public and on world opinion." The deceit "lay in the concealment of the fact that the areas being most heavily bombed were nearly always either city centers or densely populated residential areas which rarely contained any industry.

The late Erik Markusen and David Knopf in their 1995 book The Holocaust and Strategic Bombing describe the Allied air campaign as genocide.

Around 600,000 German civilians died in the war's air campaign, including 75,000 children. During one night raid on Hamburg in the summer of 1943, 45,000 met their fate in an epic firestorm. Middlebrook's Firestorm Hamburg (2012) records that, "Brains poured out of temples that had burst, bowels hung out from under ribs. The smallest children lay like roasted eels on the surface of the road." 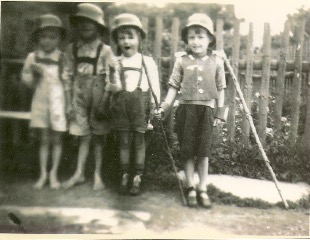 The boy holding a stick got the cardboard uniform assembly as a birthday present. Author, second right, had something to say. A trait he carried through life with mixed results. War Children's Home, Langenbruck, Upper Silesia 1943.
(Image by Eric Dietrich-Berryman)   Details   DMCA

Over a lifetime I have come to believe that Bomber Command and its Arthur Harris (his Stalinesque statue stands outside a London church) belongs to a different chapter, same book, of the Holocaust. There is no moral contrast between those who stuffed the bodies of murdered innocents into concentration camp crematoria, and those who consigned their living bodies directly into the furnace by incinerating them from the air. The only difference remaining is the cut and color of their uniforms.

Taylor does a delicate, propaganda-fueled tarantella around the subject.

He told a German newspaper, "There have been calls in Germany for the day of destruction of Dresden to be commemorated. If that were just to exemplify German suffering then it would be wrong. But as an example of what advanced industrial countries have to try to avoid in the future then it is a legitimate symbol."

Taylor tells Germans what history they are permitted to question, feel guilty about, or mourn. He is unaccustomed to contradiction by Germans. Anyway, he wrote to me, too many decades have passed since German civilian were immolated en masse. "Most people involved are dead and we shouldn't start pointing fingers except for in the case of the Holocaust." For Taylor, war criminals are indicted selectively. Crimes against humanity by other than Germans are irrelevant, inconceivable, or have an expiry date.

Keegan's view that the RAF's saturation bombing of civilians had descended to the enemy's level of barbarism finds resonance in Winston Churchill's order that the Air Crew Europe Medal would not be awarded to Bomber Command crews after June, 1944. Arthur "Butcher" Harris received no special recognition in the distribution of post-war honors.

Related Topic(s): Barbarism; Bigotry; Deceit; Dresden; Genocide; History; History; Holocaust; Holocaust Museum; Holocaust Studies; (more...) Innocent; Military; Other Cultures; Other Elections; People; Suffering; Truth; Wars, Add Tags  (less...)
Add to My Group(s)
Go To Commenting
The views expressed herein are the sole responsibility of the author and do not necessarily reflect those of this website or its editors.