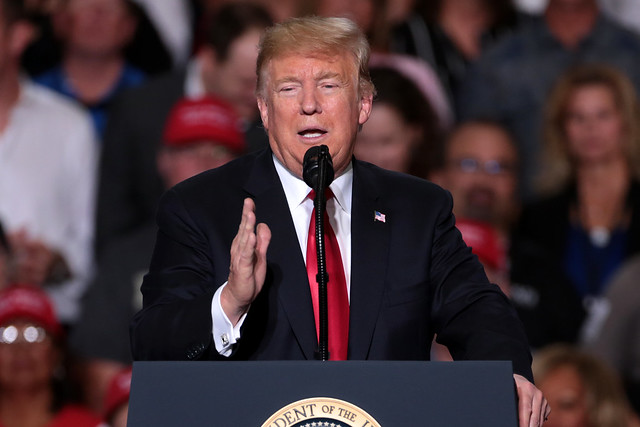 If he times it right, Donald Trump might set back the Democratic Party for a generation or more; if he misses, he'll go down in history along with Herbert Hoover as the guy who brought the nation an economic disaster.

Back in 2007 and early 2008, many of us were convinced that an economic crash was coming, and that George W. Bush and his Treasury secretary, Henry Paulson, and Fed chairman, Alan Greenspan, knew it.

And we also thought that they were doing everything they could to hold it off so it would happen after the 2008 election, so if a Democrat was elected they could say the crash was because people were "worried about the incoming Democrats," and if McCain won it would be his problem, not Bush's.

It appears that Trump may be doing the same thing, only, as with so many of his High Crimes (a phrase that includes "serious misuse or abuse of office"), he's being much more public about it. On June 15, he tweeted, "if anyone but me takes over...there will be a Market Crash the likes of which has not been seen before!"

The question now is whether he'll have the same bad luck Bush did in not being able to forestall it by a year or so.

Bush knew the business cycle that had cranked up during the late 90s was coming to an end, and he, Greenspan, and Paulson did everything they could to hold it off.

Between 2001 and 2003, he pushed through Congress and signed fully three major tax cuts for wealthy people and businesses, including massive cuts to dividend and capital gains income. This poured hundreds of billions in borrowed money into the economy, wiping out the $236 billion budget surplus Bill Clinton had left him and throwing us into a $458 billion annual deficit in 2008.

To further goose the economy, Bush and Cheney illegally got us into two wars, raising defense spending from the $290 billion ceiling it had hit during the 1990s to over $595 billion in 2008, pouring literally trillions into the defense industry.

In particular, the old Ayn Rand cult member and acolyte Alan Greenspan got into the act by lowering the Fed funds rate -- the basis of U.S. interest rates -- from 6.5 percent at the end of 2000 to below 2 percent in 2002. Greenspan kept the interest rates below 2 percent right up until just after the election of 2004, when he let them float up slightly. Bush rewarded his good efforts by reappointing him as Fed chair in 2005, which many speculate was why he'd jacked up the economy so hard leading up to the election of 2004, giving Bush a credit-fueled "feel good economy."

And it was insanely credit-fueled. Between 2000 and 2006, housing prices in the United States doubled because the low interest rates, combined with repeated Republican deregulation of the banking and security sectors, allowed millions of unqualified new home buyers into the marketplace, driving demand toward the sky.

Trump, Steven Mnuchin, and Jerome Powell have virtually cloned the process, from tax cuts to defense spending to low interest rates, and the inevitable result is increasingly obvious to financial publication opinion writers. Op-eds in staid publications like the Financial Times and the Economist are, with growing frequency, somewhere between, "The sky is about to fall!" and, "There's a meteor coming the size that wiped out the dinosaurs!"

And with good reason.

The entire "supply side" scam that if the rich people get richer it'll help us all is totally discredited, but, in deference to their billionaire donors, the GOP still clings to it. Their policies, true to their proclamations, have raised the wealth of the top 1 percent by a total of $21 trillion just in the years since Reagan's last months in office, leaving them sitting on over $30 trillion in assets and cash.

In fact, though, demand is what drives economies. And, while rich people might buy a few yachts and fancy mansions, it's the purchasing power of the bottom 99 percent that is known by economists as "aggregate demand" and actually moves marketplaces.

Related Topic(s): Depression; Economics; Homeless; Reaganomics; Trump; Trump Debts, Add Tags
Add to My Group(s)
Go To Commenting
The views expressed herein are the sole responsibility of the author and do not necessarily reflect those of this website or its editors.