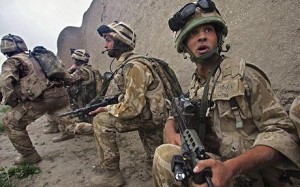 President Bush called it "cut and run." Most rational Americans call it bringing our troops home from an unwinnable war.  Either way, President Barack Obama faces a tough decision on his promised plan to begin drawing down US troops from Afghanistan next month.

There is intense pressure from both Congress and the public on the Obama administration to proceed with the scheduled withdrawal next month, which has become a greater demand with the recent killing of Osama bin Laden. With that ultimate bogey-man out of the picture, the question of "why we're there?" looms larger in the public eye.

Given the death of bin Laden, and the fact that no foreign entity has ever successfully subdued Afghanistan in 5,000 years, what possible reason is there to maintain a US troop presence? Is it some kind of political "gotcha" game? Is that worth the ongoing sacrifice of our soldiers and the slaughter of innocents we seem unable to stop killing with our drone aircraft?

And yet, America is still slow on the uptake. President Obama is in deep consultation with his foreign and defense policy teams to make a final decision. According to the National Journal:

"Vice President Joe Biden, Secretary of State Hillary Clinton, National Security Adviser Tom Donilon, and Obama's counterterrorism adviser John Brennan were among those who attended today's meeting, as did Defense Secretary Robert Gates, who is scheduled to retire at the end of this month. Gates joined the briefing via secure video conference from Afghanistan. Carney said that the president would wait to hear recommendations from Gates and Gen. David Petraeus, the head of U.S. and international forces in Afghanistan, before deciding on the size of the cutback. Over the weekend, Gates argued for a modest approach and suggested that he'd prefer to see more support troops and few combat troops removed in the initial cuts. 'If it were up to me I'd leave the shooters until last,' Gates said. The president had set July as a deadline to begin withdrawal of troops in Afghanistan, a milestone he set when he agreed late in 2009 to deploy an additional 30,000 troops to try to turn the tide of the war."

Turn the tide of the war . . . hasn't that goal passed a few years ago? Didn't "President" Bush say that victory in Afghanistan was achieved in 2004 with the installation of Hamid Karzai as president? The Unocal Oil lobbyist who would instill peace, security, and a US-dominated oil pipeline in that war-torn country? Seven years, tens of thousands of dead, maimed, and psychologically destroyed US and Afghan citizens later and nothing has changed. The codpiece is different, but the argument remains: why are we fighting and what are we fighting for?

The death of bin Laden has had added a sense of cognitive dissonance to official administration policy toward Afghanistan.  On the one hand, people are saying -- look, the Big Bogeyman is dead, time to call it a day.  On the other hand, the warhawks are crying that now is the time to strike harder with the titular head of al Qaeda six feet (or deeper) under, and put the terrorist organization out of business permanently.  Our two preeminent experts, Defense Secretary Gates and General David Petraeus, won't commit to a mutual statement on the issue of troop withdrawal or "victory " in Afghanistan.

"We're making progress," Gen. David Petraeus said when asked by ABC "World News" anchor Diane Sawyer in a joint interview in Kabul, Afghanistan whether the U.S. was winning the now decade-long war in Afghanistan. "We're really loathed to use this very loaded term of winning or losing. We've made enormous progress in a number of different geographic areas within Afghanistan. And overall, the momentum has changed," the general said.

"I believe that we have had a great deal of success in achieving the mission that our forces have been given" in terms of disrupting Taliban activity, in terms of degrading their capabilities, in terms of denying them control of population areas," Gates said.

Isn't that nice? Laying the burden squarely back on Obama's desk. Yet another big hot mess the Bush Crime Family created then dumped on the Democrats to solve.

Meanwhile, the longest war ever continues. The casualties mount. There are more than double the number of US troops in Afghanistan now than when President Obama was elected and he has expanded the war into Pakistan. There is no victory in Afghanistan in sight. It has now lasted longer that World War 1 and World War 2 combined and is the longest war in US history.

When do we say enough is enough?

Kathy never expected a career in radio as a talk show producer. Born and raised in Atlanta, Georgia, Kathy was completing her nursing degree when in 2001 - in an emergency - she was asked to fill in as the producer of Mike's program. Within a few (more...)
Related Topic(s): Afghanistan; Death; Slaughter; Soldiers, Add Tags
Add to My Group(s)
Go To Commenting
The views expressed herein are the sole responsibility of the author and do not necessarily reflect those of this website or its editors.