Former National Security Agency (NSA) official Thomas Drake faces some of the gravest charges that can be brought against an American: trial under the Espionage Act for allegedly "retaining" classified information.  Thankfully, The New Yorker has put this case under a miscroscope and revealed this criminalization of whistleblowing to be the government covering up for its own sins of secret domestic surveillance.

The article details domestic datamining, former NSA director Michael Hayden projecting votes by the Supreme Court if it eventually weighed in on NSA lawbreaking, and NSA proclaiming itself to be the executive agent for the White House.  It explains how NSA used the Trailblazer program, "a 1.2-billion flop," as a funding vehicle, despite an inexpensibe, effective, legal alternative (Thin Thread) that could have picked up actionable intelligence pre-9/11, such as the hijackers renting a hotel room just miles from NSA's headquarters. 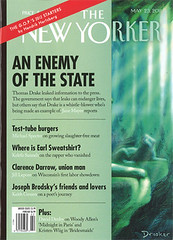 Six times government officials declined to comment on specifics, or anything at all.  Tom Drake, who goes on trial June 13th, gave his first public interview on the case, explaining:

This was a violation of everything I knew and believed as an American.  We were making the Nixon Administration look like pikers.


Although the government trots out the usual fear-mongering hyperbole that

[t]his is not an issue of benign documents . . . when individuals [leak,] our soldier in the field gets harmed . . .

the reality is that the Drake "leak" prosecution is over 5 documents, 2 of which appeared on the NSA intranet, marked "unclassified," and 3 of which were drafts or notes of information lawfully turned over to the Department of Defense Inspector General in an investigation that validated Drake's concerns about NSA's wrongdoing. The documents were retroactively classified after Drake's house was raided and at least one document has since been declassified.  As has been noted in pre-trial proceedings:

There have never been documents so benign that are the subject of this kind of prosecution against a client whose motives are as salutary as Tom's.

In September, 2002, [Binney], Wiebe, Loomis, and Roark filed what they thought was a confidential complaint with the Pentagon's Inspector General, extolling the virtues of the original Thin Thread project and accusing the N.S.A. of wasting money on Trailblazer.

Billions in wasted money was only the beginning, according to The New Yorker:

When Binney heard the rumors, he was convinced that the new domestic-surveillance program employed components of Thin Thread: a bastardized version, stripped of privacy controls. "It was my brainchild," he said. "But they removed the protections . . . When you remove that, you can target anyone."

Binney expressed terrible remorse over the way some of his algorithms were used after 9/11  . . . "I should apologize to the American people.  It's violated everyone's rights. It can be used to eavsdrop on the whole world."

In the face of Roark telling then-director of the NSA, Gen. Michael Hayden, that NSA's domestic surveillance was unconstituional, the article details that Hayden told her he could count on a majority of the Supreme Court's "nine votes":

According to Roark's notes, Hayden told her that such a vote might even be 7-2 in his favor.

The hurbris and arrogance are stunning.  The NSA Director claiming to have 7 Supreme Court justices in his pocket to support warrantless surveillance on Americans is a complete abdication of the oath Hayden took to protect and defend the Constitution against all enemies foreign and domestic.  We may never know whether or not Hayden really did have the seven votes becausethe FISA Amendments Act of 2008 effectively shut down all lawsuits on this issue.

Numerous experts, conservative and liberal, identify what the Drake prosecution is really about.

Steven Aftergood of the Federation of American Scientists says:

We are witnessing the bipartisan normalization and legitimization of a national-surveillance state.

Even neo-conservative secrecy advocate Gabe Schoenfeld, whose far-flung idea it was to use the Espionage Act to prosecute leakers, calls Obama's conduct "draconian:"

Ironically, Obama has presided over the most draconian crackdown on leaks in our history-even more so than Nixon

Mort Halperin, whose phone was tapped by his old boss, Richard Nixon, sums it up best:

If Drake is convicted, in means the Espionage Law is an Official Secrets Act.

For those of you who recognize that Drake is not an enemy of the state, please sign the petition to demand oversight and stop his prosecution.  You can also "like" the Save Tom Drake Facebook Page.

My name is Jesselyn Radack and I am the former Justice Department ethics attorney and whistleblower in the case of "American Taliban" John Walker Lindh. In today's issue of The National Law Journal (Feb. 19, 2007), I have an Op-Ed entitled (more...)
Related Topic(s): Coverups; Obama Same As Bush; President Barack Obama POTUS; Whistleblowers-ing; White House Coverups, Add Tags
Add to My Group(s)
Go To Commenting
The views expressed herein are the sole responsibility of the author and do not necessarily reflect those of this website or its editors.

Charging Wikileaks Source: The Nail in the Coffin of Whistblowers

DHS Spies on Maryland Peace Activists: It's Worse Than We Thought

Wash. Post Profile: Thomas Drake (An NSA Whistleblower We Would Have Cheered During the Bush Years)

Justice Department Leakers of Classified Info. Get a Pass