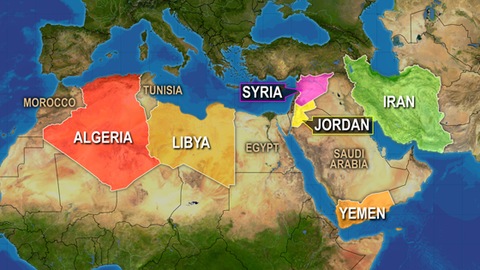 Copyrighted Image? DMCA
With Syria's Western-backed sectarian war for regime-change spilling over into both Iraq and Lebanon between forces that root themselves in divisions between Sunni and Shia, the  New York Times  has come forward to attribute this nightmare scenario to Washington's insufficient engagement in the region.

The US "newspaper of record" cites fighting in the Iraqi cities of Fallujah and Ramadi involving "masked gunmen" whom "so many American soldiers died fighting."

It attributes all conflicts in the region to "the emergence of a post-American Middle East in which no broker has the power, or the will, to contain the region's sectarian hatreds."

It is this, we are told, which has allowed "fanatical Islamists" to flourish in both Iraq and Syria. The Times further attributes this situation to struggles between "two great oil powers, Iran and Saudi Arabia, whose rulers -- claiming to represent Shiite and Sunni Islam, respectively -- cynically deploy a sectarian agenda that makes almost any sort of accommodation a heresy."

"Linking all this mayhem is an increasingly naked appeal to the atavistic loyalties of clan and sect," the Times adds.

The newspaper makes a fleeting reference to the United States having "touched off" civil war in Iraq with an invasion that is then justified as an "American nation-building effort."

This explanation of the unfolding events in the Middle East amounts to a willful and self-serving falsification of history.

Blame for the escalating crisis lies at the door of the White House, not because of a failed policy, but because of its ongoing and historic efforts to dominate the region and its oil riches.

The first Gulf War in 1990, the invasion of Iraq in 2003, the 2011 war in Libya and the subsequent efforts to topple the Assad regime in Syria were all aimed at eliminating Iraq and Iran as regional powers and ensuring undisputed US hegemony. In every instance, the US has been at the forefront of encouraging and fostering "atavistic loyalties of clan and sect" through a policy of building fronts of regional powers as proxy forces to fashion the Middle East to its liking.

Citing the "Shia arc of extremism," the US responded to the overthrow of its client regimes in Tunisia and Egypt in 2011 by toppling the regime of Muammar Gaddafi in Libya, supporting the Muslim Brotherhood's rule in Egypt, and then assembling a coalition of Sunni powers led by Turkey, Saudi Arabia and Qatar to move against the Baathist regime in Syria as a precursor to action against Iran. The opposition forces they built up in Syria were based on a core of Al Qaeda-linked Islamists.

The policy proved a terrible failure from which the US is now suffering blowback on a massive scale. This is what has generated the complaints voiced by the New York Times. Faced with overwhelming domestic opposition to war and the threat of a direct conflict with Russia, the US seized on the Russian-brokered deal for Syria's chemical disarmament and Iran's subsequent offer of a rapprochement as a an alternative means of asserting its interests.

This has both alienated and thrown into political crisis its former regional allies.

Turkey, for example, wanted to establish itself as regional powerhouse, with Prime Minister Recep Erdogan's Justice and Development Party advanced as an Islamist model for other pro-Western regimes. But the US abandoning support for the Muslim Brotherhood in Egypt and then its retreat on war against Syria has destabilised Erdogan, who accuses Washington of sponsoring a coup attempt against him led by Fethullah Gulen, a Pennsylvania-based Muslim cleric.

Saudi Arabia has declared that it will now follow a path independent of Washington in Syria and internationally, refusing a seat on the United Nations Security Council in protest against the shift on Syria and the US opening nuclear talks with Iran. Saudi's London ambassador, Prince Mohammed bin Nawwaf, wrote in the New York Times December 17, "This means the Kingdom of Saudi Arabia has no choice but to become more assertive in international affairs ...We will act to fulfil these responsibilities, with or without the support of our Western partners."

Chris Marsden's work can be found on wsws.org, a website dedicated to global awareness of socialist issues & which serves as the forum for the International Committee of the Fourth International (ICFI).
Related Topic(s): Destabilization; Middle_East_Conflict; Oil; Politics, Add Tags
Add to My Group(s)
Go To Commenting
The views expressed herein are the sole responsibility of the author and do not necessarily reflect those of this website or its editors.