Photo Propaganda: Over 90% of Putin images from the MSM are negative such as this one.
(Image by askyog)   Details   DMCA

The anti-Putin and anti-Russia propaganda never stops as the Main Stream Media (MSM), led by the New York Times, prepares the American public for a war with Russia. The latest insult to the intelligence of anybody who has been paying attention to U.S. war crimes is a New York Times editorial " Vladimir Putin's Outlaw State ", by the editorial board, on September 29, 2016.

The MSM propaganda assault on the Russian Federation's president, Vladimir Putin, has been non-stop. The propaganda heat was turned up to boiling after Russia's intervention in President Obama's plan in 2013 to bomb Syria, supposedly for crossing his Red Line of using chemical weapons. Now we know that the Red Line fiasco was a hoax, but the MSM was on board right away for another rush to war before the facts were known.

The neocons were furious that Russia was able to use diplomacy to thwart Obama's plan to use Shock and Awe airpower to topple the elected head of the government in Syria, Bashar al-Assad. The establishment leaped onto a campaign, with Hillary Clinton at the lead, to make Vladimir Putin personally into an international pariah. The MSM has been an eager co-conspirator in the intensive anti-Putin propaganda. The end game for the Empire is regime change in Russia, as well as in Syria. The MSM is cavalier when it comes to the risk of starting a nuclear holocaust.

Neocons and their fellow travelers the Liberal Interventionists are licking their lips over the regime change prize of replacing Putin with a neoliberal puppet, such as was the drunken fool Boris Yeltsin. The U.S. public has no memory of the economic basket case that Yeltsin and his U.S. mentors of Milton Friedman's Chicago Boys turning Russia into a failed state. The Shock Therapy prescription from the U.S. and the International Monetary Fund for rapid privatization led to the looting of Russia's state owned enterprises, and taking a meat ax to the social safety nets that the Russian people were depending on from the state. The painful memory of the economic collapse is still fresh in the Russian public's minds, as they remember how unemployment and inflation ruined their lives and set life expectancy plummeting to 62 years.

Putin's 82% approval rating among the Russian people is the envy of every Western politician today. Under Putin's leadership the Russian economy was brought back to life from its deathbed. Putin has also restored Russia's military dignity and the ability to defend their Motherland. Obama and Hillary Clinton ridicule Putin's success as an ambition to "restore the Russian Empire" or "bring back the USSR". The New York Times must like the joke as they keep repeating it, as they did again today: "Mr. Putin fancies himself a man on a mission to restore Russia to greatness" ha, ha, ha! The subliminal propaganda to the American public is that Putin is so arrogant and stupid that he is out of touch with the reality that there is one and only one Empire in the world, and that is the USA Empire: no challenge or noncompliance to the Empire will be tolerated from any country, big or small.

The New York Times editorial board parrots, and not very subtlety, that the U.S. is gunning personally for Vladimir Putin's hide as another trophy: "Western officials have accused [Putin] of war crimes, charges that could be referral to the International Criminal Court". The message is to remind Mr. Putin that the U.S. has weaponized international tribunals, even though the U.S. does not recognize or abide by their authority, except when it is convenient to use against enemies of the Empire. The New York Times is delivering a message from Washington neocons that he too could end up with a bayonet in his rectum (e.g. Muammar Gaddafi" ha, ha, ha ) or hung (e.g. Saddam Hussein) as a war criminal. 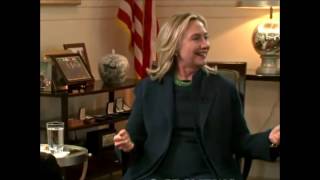 We came, we saw, he died - Hillary Clinton on Gaddafi Just like that!
(Image by PoliticsRFun, Channel: PoliticsRFun)   Details   DMCA

U.S. war criminals Bush, Cheney, Obama and Clinton have nothing to fear from any tribunals, as there is no power on earth that could ever drag them before an International Criminal Court. One of Obama's first acts as POTUS in 2009 was to declare that when it comes to U.S. war crimes and war criminals we should "look forward, not backwards". Nor does the New York Times look backwards or even in the present when it comes to comparing Putin's alleged war crimes with undisputed war crimes committed by Bush, Cheney, Obama, Clinton et al.

The New York Times is hypocritical in the extreme with its list of Putin's alleged war crimes; crimes that the New York Times says violates "common human decency" as well as "violates the peace". Putin is charged with using "bunker-busting bombs that can destroy underground hospitals and safety zones where civilians seek shelter", backing a proxy army of rebels in Ukraine, bombing hospitals in Aleppo Syria, and shooting down a civilian airliner MH-17 over Ukraine. If true these acts would indeed be war crimes, but it is not the open and shut case that the New York Times claims; nor are Putin's alleged crimes "against common human decency", if one objectively compares them to what the U.S. is known to have "commonly" been doing repeatedly for 15+ years in the so-called War Against Terror.

But the real "crime", according to the New York Times, is that Putin is backing his "client President Bashar al-Assad". The U.S. neocons and the weak Obama administration's real furry is that Putin is interfering again with Washington's regime change project in Syria; a project which clearly violates international law. Unlike Russia which has been legally invited to aid the lawful government of Syria, the U.S. no longer even tries to hide or make excuses for its blatant war of aggression against Syria.

Surely, the New York Times knows that wars of aggression are the ultimate war crime, because it is the war crime that leads to all other war crimes. The New York Times (and the heavily propagandized American public) have no memory of U.S. invasions of Iraq, Libya and now Syria; nor of the U.S. bombings of hospitals, assassinations by drones, killing civilians by the millions in Afghanistan, Iraq and Libya. The U.S. has a long and sordid history of invading countries, sponsoring coups, as well as causing the deaths of millions of people by backing mercenaries such as the "Arab-Afghan" mujahideen, and state bad-actors such as Pakistan, Turkey and Saudi Arabia and their repression and slaughter of millions of people.

Obama & Company are now in panic mode because the Assad government in Syria, with the legal help form its ally Russia, is on the verge of crushing the U.S. backed terrorist-mercenaries in Aleppo, Syria. It takes a lot of money to fund a mercenary army and it is no secret that the U.S. has spent hundreds of millions of dollars to recruit, train, supply and unleased terrorist-mercenaries in Syria...the "moderate rebels" are a wild invention of the MSM's imagination, and they do not exist.

The U.S. has used the same ploy of proxy armies...so-called freedom fighters...in South Asia, the Middle East and Africa for decades. The MSM has been a co-conspirator in keeping clandestine and illegal U.S. wars of aggression secret.* As a result the American public is in a deep state of ignorance and denial. The MSM spends 24/7 pondering and pontificating on how to defeat ISIS, when they have known all along that "Islamic terrorists" exist because they are being funded by the U.S. and their client allies such as Pakistan, Saudi Arabia, Turkey and the United Arab Emirates.

Related Topic(s): Propaganda, Add Tags
Add to My Group(s)
Go To Commenting
The views expressed herein are the sole responsibility of the author and do not necessarily reflect those of this website or its editors.