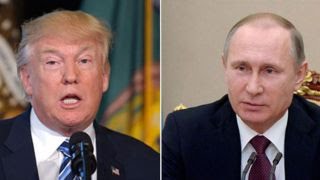 The Congress of the United States by almost unanimous votes in both House and Senate has made it clear that Congress had rather destroy the President of the United States and to increase the risk of nuclear war than to avoid conflict with Russia by normalizing relations. The vote on the new sanctions makes it pointless for President Trump to veto the bill, because it passed both houses by far more than the two-thirds vote required to override the president's veto. The only thing Trump can achieve with a veto is to prove the false charge that he is in league with Vladimir Putin

The new sanctions bill forecloses the possibility of reducing the rising tensions between the two major nuclear powers. It also shows that whatever interest Congress has, if any, in reducing the threat of war and in avoiding a break with Europe over the sanctions, Congress has a much greater interest in continuing to collect campaign contributions from the powerful and rich military/security complex and in playing to the growing hatred of Russia that is encouraged by the US media.

This reckless and irresponsible action by the US Congress makes completely clear that Washington has intentionally chosen conflict with Russia as the main element of US foreign policy. Perhaps now the Russian government will abandon its cherished illusion that an accommodation with Washington can be reached. As I have written on many occasions, the only way Russia can achieve accommodation with Washington is to surrender and accept American hegemony. Any further resistance of the Russian government to this obvious fact would indicate dangerous delusion on the part of the Russian leadership.

The fig leaf Congress chose for its violation of diplomatic protocols and international law is the disproven allegation of Russian interference in behalf of Trump in the US presidential election. An organization of former US intelligence officers recently announced that forensic investigation has been made of the alleged Russian computer hacking, and the conclusion is that there was no hack; there was an internal leak, and the leak was copied onto a device and Russian "fingerprints" were added. There is no forensic evidence whatsoever that shows any indication of Russian hacking.

It is all made up, and everyone alleging Russian hacking knows it. There is no difference between the allegation of Russian hacking and Hitler's allegation in 1939 that "last night Polish forces crossed our frontier," Hitler's fig leaf for his invasion of Poland.

That Congress uses a blatantly transparent lie to justify its violation of international law and intentionally worsens US relations with both Russia and the EU proves how determined Washington is to intensify conflict with Russia. Expect more false allegations, more demonization, more threats.

Related Topic(s): Russian Hacking; Russian Propaganda; Sanctions, Add Tags
Add to My Group(s)
Go To Commenting
The views expressed herein are the sole responsibility of the author and do not necessarily reflect those of this website or its editors.