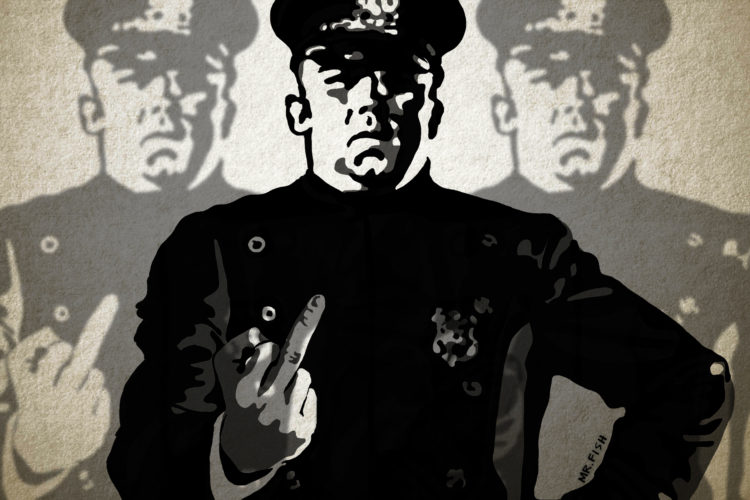 The police forces in impoverished urban communities, equipped with military-grade weapons and empowered to harass and kill largely at will, along with mass incarceration, are the principal tools for the social control of the poor. There is little pretense of justice and even less of protection and safety. The corporate state and our oligarchic rulers fear a backlash from those they abandoned in deindustrialized enclaves across the country, what Malcolm X called our "internal colonies." The daily brutality and terror keep the poor, especially poor people of color, in bondage. On average, more than 1,100 people, or one every eight hours, almost all unarmed, are killed every year by police in the United States. These killings are not accidents. They are not the results of a failed system. The system works exactly as it is designed to work. And until the system of corporate power is destroyed, nothing will change for the poor, or the rest of Americans.

Every police reform going back decades, including due process, Miranda rights and protocols for filing charges, has only resulted in increased police power and resources. Our national conversation on race and crime, which refuses to confront the economic, social and political systems of exploitation and white supremacy, has been a whitewash. The vast pools of the unemployed and underemployed, especially among people of color, are part of the design of predatory corporate capitalism. And so are the institutions, especially the police, the courts, the jails and the prisons, tasked with maintaining social control of those the system has cast aside.

The elites are acutely aware that without police terror and the U.S. prison system, which holds 25% of the world's prison population, there would be intense social unrest. Outrage over the police killings of Michael Brown in Ferguson, Mo., Eric Garner in New York City, Walter Scott in Charleston, S.C., Tamir Rice in Cleveland, Freddie Gray in Baltimore and Laquan McDonald in Chicago -- fanned by video recordings or social media exposure -- may have led to the rise of groups such as Black Lives Matter but it has done nothing, and will do nothing, to curb police abuse. More training, body cameras, community policing, the hiring of more minority members as police officers, a better probation service, equitable fines and special units to investigate police abuse are public relations gimmicks. No one in power has any intention of loosening the vise. Authorities are too afraid of what might happen.

Tax cuts for corporations and the wealthy, the loss of industrial, unionized jobs with sustainable incomes, and the collapse of public institutions have decimated city and county budgets. Police departments are used to make up lost revenue through the constant imposition of fines on the poor, often for manufactured crimes such as blocking pedestrian traffic (which means standing on a sidewalk), drinking from an open container or selling tax-free cigarettes. Arrests and consequent fines for such violations are called "quality of life" actions. Poverty has forced many, especially the young, to derive an income from the illegal economy. The lack of work in the legitimate economy and the bottomless need for governmental revenue have turned policing into a sustained war on the underclass. It was in this war that Garner, attempting to provide for his family by selling tax-free cigarettes, became a repeated target of police harassment and was eventually choked to death by police officers on July 17, 2014, in Staten Island.

Matt Taibbi's book "I Can't Breathe: A Killing on Bay Street" uses the killing of Garner to expose the architecture of state repression. None of this repression and abuse, as Taibbi illustrates, is accidental, and none of it will be fixed until the social, political and economic injustices perpetrated upon the poor by corporate power are reversed. [Click here to see Hedges interview Taibbi.]

"Eric Garner was murdered by history," Taibbi writes. "The motive was the secret sin of a divided society, a country frozen in time for more than 50 years, stopped one crucial step short of reconciliation and determined to stay there."

The war on poor people of color has been a bipartisan project. No one was executed in the United States between 1968 and 1976, but drastic changes in laws occurred in the 1990s. During the administration of President Bill Clinton, Democrats and Republicans passed a series of "law and order" bills that saw the number of crimes punishable by death leap to 66 in 1994. In 1974, there had been only one such crime identified in federal law.

The two parties, in the words of Naomi Murakawa, engaged in "a death penalty bidding war." Then-Sen. Joe Biden was one of the leading proponents of expanding the death penalty. Biden boasted that he had "added back to the Federal statutes over 50 death penalties." The 1994 Violent Crime Control and Law Enforcement Act, pushed through by Clinton and Biden, provided funding for tens of thousands of community police officers and drug courts. It banned some assault weapons. It mandated life sentences for anyone convicted of a violent felony after two or more prior convictions, including for drug crimes. The mandated life sentences were known as three-strikes provisions.

The population in state and federal prisons during the Clinton administration rose by 673,000 inmates -- 235,000 more than during Ronald Reagan's presidency. The police became omnipotent on the streets of poor communities. The courts became a conveyor belt transporting the poor into the nation's jails and prisons.

Taibbi writes at the opening of his book of an unprovoked police assault in 2014 on Ibrahim Annan, the son of two immigrants from Africa, while he was seated in his car in Staten Island. Annan, in his late 30s, was beaten mercilessly on his face and head by police with what is believed to have been a telescoping metal baton. His left leg was broken in three places. A year later he would still be walking with a cane. As is typical in police abuse cases, a number of charges were filed against him: menacing; criminal possession of marijuana in the fifth degree; obstructing government administration; unlawful possession of marijuana; assault in the second degree, and assault in the third degree, among others. Taibbi writes:

"The long list of charges slapped on Annan were part of an elaborate game police and prosecutors often play with people caught up in 'problematic' arrests. A black man with a shattered leg has a virtually automatic argument for certain kinds of federal civil rights lawsuits. But those suits are harder to win when the arrest results in a conviction. So, when police beat someone badly enough, the city's first line of defense is often to go on the offense and file a long list of charges, hoping one will stick. Civil lawyers meanwhile will often try to wait until the criminal charges are beaten before they file suit.

"It's a leverage game. If the beating is on the severe side, the victim has the power to take the city for a decent sum of money. But that's just money, and it comes out of the taxpayer's pocket. The state, meanwhile, has the power to make the losses in this particular poker game very personal. It can put the loser in jail and on the way there can take up years of his or her life in court appearances. As Annan would find out, time is the state's ultimate trump card."

Victims of such violence are uniformly vilified to a public that has a predisposition to fear people targeted by police. And so are those who bear witness, such as Ramsey Orta, who used his phone to video-record the killing of Garner.

Related Topic(s): Arrest; Black Agenda Report; Black History; Crime; Ghetto; Racism; Taibbi, Add Tags
Add to My Group(s)
Go To Commenting
The views expressed herein are the sole responsibility of the author and do not necessarily reflect those of this website or its editors.