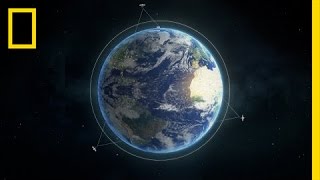 Climate Change: It's Real. It's Serious. And it's up to us to Solve it.
(Image by YouTube, Channel: National Geographic)   Details   DMCA

An idea beloved of the technorati is that we are actually living, not on the earth we seem to inhabit but in a simulation. Elon Musk has said that it's "most likely" the case, and Neil deGrasse Tyson has set the odds at 50-50. If so, we've clearly reached the point where whoever is supervising the action has handed the game over to a bored super-villain who is wildly pressing buttons: Pandemics! Locusts! Firestorms!

The name of this newsletter is The Climate Crisis, but for the moment the emphasis is going to be on the last of those words. We need to understand how crises work, and, since I've been thinking about them for many years, I have a few thoughts to offer. This week's reflection has to do with time, which is a variable we seriously underappreciate. We're used to political debates that go on forever -- when I was a high-school debater, in 1978, our topic for the year was "That the federal government should establish a comprehensive program to regulate the health care system in the United States." We imagine that, if we don't solve a political problem now, we'll get around to it eventually. Meanwhile, we'll chip away at it -- delaying a solution extends suffering along the way, but it doesn't necessarily make a problem ultimately harder to solve. Certain kinds of problems don't work that way, however. Physical problems -- climate change and the coronavirus being the pertinent examples -- are all about time. And what's striking to me is how similar these two examples are.

We know that the first cases of the coronavirus in South Korea and the United States emerged on January 20th and January 21st, respectively. The Koreans responded immediately, rolling out a widespread testing regimen; it was disruptive, but that nation "flattened the curve" and is now looking at the pandemic in the rear-view mirror. In this country, we delayed; the President didn't want "the numbers" growing, and was convinced that it would somehow "go away" by itself, maybe when the weather warmed. So we wasted many weeks, during which time the virus gathered momentum. Now we face an incredibly costly (and far more disruptive) effort to keep it from taking down our entire society.

Similarly, with climate change, we had effective warning in the late nineteen-eighties and early nineties. At that time, we could have made somewhat disruptive efforts to cut carbon emissions by a percent or two a year -- call it the South Korean approach. But we didn't, and nor did any other country, for the same reason: the oil companies didn't want "the numbers" (in this case, the profits) to change. So they promoted a farrago of lies intended to quiet people's fears, and the climate crisis gathered momentum. We've emitted more industrial carbon since 1988 than in all of prior human history, utterly failing to flatten the curve. (In fact, we call the diagram that outlines our dilemma the Keeling Curve, and it just keeps rising.) As a result, we now have to act in far more disruptive ways.

This lesson about time has been very hard-earned, and we dare not forget it. In the case of the virus, we need to keep moving with all speed to distance ourselves. If you're a city Councillor or a mayor or a President, the correct answer to "when" is "right now." (Actually, "last month.") And, in the case of climate, we need to start moving with all possible haste to transition away from fossil fuels. Using the current round of corporate bailouts to advance green energy would make sense.

Let's assume that we are in a game, but one that we can control. Our goal has got to be not winning -- what would that look like? -- but simply to keep the clock running, preserving the chance to pass the action to the next generation.

Another variable, of course, is physical space. Global warming, as I've argued before, is shrinking the size of the board on which we play the human game. That may be most obvious along our coastlines, where the ever-more-rapidly-rising sea is suddenly shifting what had been a line constant throughout human history. The shift has been just slow enough that it's been hard to picture -- which is why the work of the photographer Virginia Hanusik is so interesting. You can see it here and here, and it's worth staring at, because it's both stark and subtle.

How would you describe your work on waterlines? Where did it come from?

My work really focuses on the coast as a liminal place, and the human engineering we've done to create a sense of permanence in spaces that were always meant to change. I began centering my practice around these concepts when I moved to Louisiana, and worked with groups that were mitigating the impacts of rapid land loss in the state due to environmental degradation from the oil and gas industries, sea-level rise, and the structural taming of the Mississippi River.

For the past couple of generations, the beachfront town has be en the picture of ease and relaxation. Was that the case? What do you think it will feel like a few decades hence?

Bill McKibben is the author of a dozen books, including The End of Nature and Deep Economy: The Wealth of Communities and the Durable Future. A former staff writer for The New Yorker, he writes regularly for Harper's, The Atlantic Monthly, and The (more...)
Related Topic(s): AARP; Climate Crisis; Oil, Add Tags
Add to My Group(s)
Go To Commenting
The views expressed herein are the sole responsibility of the author and do not necessarily reflect those of this website or its editors.