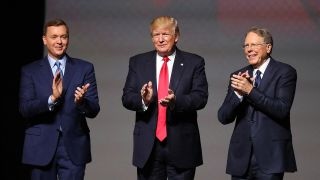 After the usual shock and horror, my reaction after hearing about the latest United States mass shooting perpetrated by a demented white male with an assault weapon was, sad to say, "Here we go again." I waited for the standard cycle to run its depressing course.

The venues and details are different each time, of course, but the story is always the same: a demented psychopath with weaponry and ammunition made available to him through loose gun laws. He wreaks mass-murderous havoc on soft-target innocents. Often the shooter dies, too. Sometimes -- like the teenage Nikolas Cruz, who is alleged to have killed 14 of his fellow high school students in Parkland, Fla., three weeks ago -- the mass murderer lives.

First come the ghastly details of murder, maiming and mayhem. Then come the breathless reports on the shooter and his history, the press conference with the authorities, the statements of dismay, condolence and prayer from the governor, the president and other public personalities and officials.

And then comes the debate. Liberals and moderates in media and politics advocate gun control, pointing out the obvious fact that military-style assault weapons magnify psycho-killer body counts to a horrifying degree and have no place in a civilized society.

Liberals call for elementary restrictions, such as banning assault weapons and more stringent background checks. Gun control advocates note that other nations do not experience the astronomically high levels of gun violence and murder rates that plague the U.S., thanks in great part to the civilized gun laws they have in place. This "left" opinion is, and has long been, shared by most of the populace.

We learn again that the really big bloodbaths are just the tip of the U.S. gun-slaughter iceberg. Multiple-death gun incidents occur with shocking regularity in a nation saturated by lethal firearms. As The Guardian reported last fall after the record-setting massacre in Las Vegas, "No other developed nation comes close to the rate of gun violence in America. Americans own an estimated 265m guns, more than one gun for every adult. Data compiled by the Gun Violence Archive reveals a shocking human toll: there is a mass shooting -- defined as four or more people shot in one incident, not including the shooter -- every 9 out of 10 days on average."

Led by the powerful National Rifle Association, the right pushes back. It's time, pro-gun politicos say, for prayers, mourning and healing, not for "politicizing a great tragedy." Many "conservatives" blame the bloodbath on sheer evil. The more sophisticated "conservatives" say it's a mental health issue, not a gun policy problem: "Guns don't massacre people, crazy people do." We are expected to think they seriously believe that diminutive and cowardly psychotics like James Holmes, Adam Lanza and Dylann Roof could have shed the same amount of blood with a machete as they did with guns.

Some on the right advance the dangerous notion that more people should be armed and ready to fight it out with mass shooters. The solution, these reactionaries think (or claim to think) is more high-power guns in circulation, not fewer. (The ridiculous Trump-approved call for teachers to be armed has never been run up the right-wing flagpole with such amplification as it has in the wake of the Parkland killings.)

The post-shooting argument ends in stalemate and nothingness. Another momentary upsurge of domestic popular revulsion against American gun madness gives way to resignation and retreat. We count the days until the next big gun massacre.

Could the aftermath of the tragedy at Marjory Stoneman Douglas High School be different? It seemed possible. It sparked a more impressive and potentially influential wave of gun-control activism than have high-profile mass shootings of the last two-plus decades. As The New York Times reported in a recent Page 1, above-the-fold news story:

"The mass shooting ... in Parkland, Fl., has thrust gun rights into the midterm campaign, scrambling traditions in both parties as the debate shifts toward firearms restrictions. ... A host of House Republicans and a handful of the party's governors are beginning to distance themselves from their party's gun-rights orthodoxy, signaling an openness to restrictions that reflects the rising anger among suburban voters. ... Democrats are under even more pressure from within to recalibrate their position on the issue. Even as they attempt to reclaim governorships and congressional seats in red-tinged regions, moderates recognize that bearing the mark of the N.R.A. could be fatal in their primaries ... the grim spectacle of [repeated mass shootings] ... by individuals wielding military-style semiautomatic rifles has mobilized gun control advocates in a new way -- and pushed even red- and purple-state Democrats to move abruptly in their direction."

Popular support for gun control usually rises a bit after mass shootings. But Parkland was different. As Politico reported, "Support for stricter gun laws has spiked in polls conducted after the fatal South Florida school shooting, hitting its highest level in at least a quarter-century. ... The percentage of Americans [68 percent] who want more restrictive gun laws is greater now than after any other recent shooting." (emphasis added)

No less an NRA-backer than President Donald Trump was moved to sound as though he'd been turned into a gun control advocate. In an hour-long televised White House gathering with congressional representatives, Trump freaked out Republicans by voicing openness to a variety of Democratic Party gun proposals. He appeared to embrace a reform package including a prohibition (supported by 77 percent of Americans) on bump stock devices that "turn legal weapons into machine guns" (Trump's words); the raising of the minimum age for legal assault weapon purchase from 18 to 21 (supported by 81 percent); a significantly improved system of background checks (supported by 88 percent). It sounded as though Trump was ready to call for bringing back an assault weapon ban, which is backed by just over two-thirds (68 percent) of the populace. "Take the guns first, then go to court," Trump said on the topic of crazy people with weapons.

But then the NRA and Republican Party rebelled, calling Trump's liberal gun rant "surreal" and an un-American threat to "freedom" and "due process." Trump huddled in the Oval Office with NRA Executive Vice President Wayne LaPierre and top NRA lobbyist Chris Cox. LaPierre certainly reminded Trump of the significant backing the NRA gave Trump in 2016 -- and of the remarkable passion with which its "14 million members" will resist even the slightest abridgement of their cherished "right to bear arms."

Paul Street (www.paulstreet.org and paulstreet99@yahoo.com) is the author of Empire and Inequality: America and the World Since 9/11 (2004), Racial Oppression in the Global Metropolis (2007), Barack Obama and the Future of American Politics (more...)
Related Topic(s): Capitalism; Guns; NRA; Shooting; Shootings, Add Tags
Add to My Group(s)
Go To Commenting
The views expressed herein are the sole responsibility of the author and do not necessarily reflect those of this website or its editors.