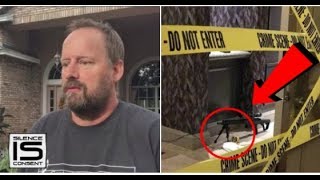 Forensic Acoustic Analysis Points to Existence of a Second Shooter.

This analysis seems to make sense. If it has been done correctly, it is evidence of a second Las Vegas shooter. It is evidence not only of two sets of gunshots but of bullets hitting the ground from two different distances. So unless the bullets were being fired into the ground only, it seems people will have been hit.

On the other hand, we have what seem to be videos of crisis actors carrying pretend wounded people into a hospital, and we have videos of hospital visits with alleged seriously wounded people who have had an almost instantaneous recovery. As the letter from the purported military surgeon pointed out, quick recoveries from gunshot trauma are not the norm.

Remember also the Republican congressman, Steve Scalise, who was shot in the hip last June in D.C. He was in critical condition for some time, and was in no condition to be giving interviews a couple of days later. Yet, here is a video of a young woman allegedly shot in the hip at the Las Vegas concert all rosy cheeked and chatting away a mere three days after being "nearly paralyzed" by her gunshot injury.

If there are dead and injured, what is the point of crisis actors and interviews with victims who show no sign of trauma?

If there is acoustic evidence of two shooters from two locations, why is the official story insistent on one shooter from one location?

You can see how difficult it would be to try to get the truth. There are too many other things that need my attention, and for which I am better qualified, for me to commit any more time and energy to the Las Vegas shooting.

As in every other case, there is an official story, one that always seems to be ready in advance, and one from which authorities and media do not depart. The "investigation" looks more like the imposition of an official story. The media and the public authorities are content to dismiss suspicions by calling them conspiracy theories. This makes it impossible to clear up contradictions and anomalies.

I promised you an account of any qualified replies to the purported military surgeon's letter. Read the surgeon's letter here. This is from a person who identifies himself as a paramedic for 22 years:

"Sir,
After reading the letter from the retired surgeon addressing gunshot wounds, I wanted to comment that I, too, am mystified by the set number of fatalities and absence of fatal complications. I spent 22 years employed as paramedic and have seen many gunshot wounds. Granted, the distance of the shots can explain the lesser number of horrible, graphic wounds, but the publicized accounts of the wounded seem very inconsistent with my experiences with gunshot wounds and the recovery of those who have been shot. I understand we are not witnessing the day to day progress of those who who survived, but I agree with the surgeon that it doesn't add up. Thank you."

I have had two confirmations of the veracity of the surgeon's letter from trama RNs. However, one of them tells me she knows of someone who was killed.

I have not heard from any surgeons familiar with gunshot wounds. I would imagine that they want to stay clear of all of this.

People with extensive firearms experience call attention to the photo of the dead Stephen Paddock in the hotel room. Where, they ask, are the thousands of shell casings and empty ammunition clips from the extensive automatic fire? Others point out that the few casings in sight are mysteriously on top of Paddock's blood, not covered by it.

I can't explain any of this. We have an official story, and that is all we are going to get.

Related Topic(s): Firearms; Investigation; Shooter; Suspicion; Theories; Video, Add Tags
Add to My Group(s)
Go To Commenting
The views expressed herein are the sole responsibility of the author and do not necessarily reflect those of this website or its editors.