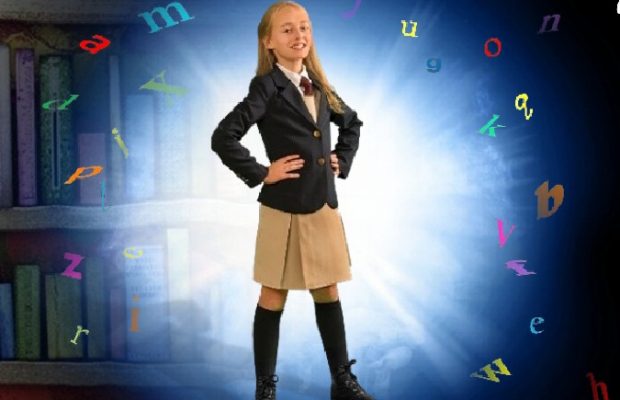 This may sound like an odd way to begin a review of a play, but I think you will agree that it is apropos, since the musical Matilda, based on the book by the impish writer Roald Dahl and produced by Amherst Leisure Services Community Theater, has just opened and will run, most appropriately, through the Sunday of Martin Luther King weekend and continue the following Thursday through Sunday at Bowker Auditorium at the University of Massachusetts in Amherst. I like to think MLK would approve.

Didn't Dr. King say that 'Nothing is more dangerous than sincere ignorance and conscientious stupidity."

For these are the enemies that the young girl Matilda, the play's central character, must fight, a battle that resonates very powerfully from the Bowker stage with this inspiring production. It is hard to believe that it is produced by an amateur theater company, so fantastic is the staging, the sets, the choreography, and the performances. One comes out of this production mesmerized, head swirling, a swing in one's step as one realizes that Matilda is right:

And that's not right"

So rebel against injustice.

Sometimes a musical can entertain and simultaneously send a powerful social message far more effectively than a thousand political tracts or the repeated admonitions of a teacher. Oscar Hammerstein's countless lyrics come to mind. Enchanted by Richard Rodgers' music, the listener is instructed by Hammerstein's words: "You've got to be taught to be afraid/Of people whose eyes are oddly made/ And people whose skin is a diff'rent shade/You've got to be carefully taught."

Matilda is filled with such captivating lyrical moments.

"We're told we have to do what we're told, but surely sometimes you have to be a little bit naughty," sings Matilda, as she leads her schoolmates in an uprising against the abusive headmistress, Miss Trunchbull, a sadistic monster who hates children. Matilda's parents are equally horrible morons who hate books and watch the "telly" constantly for their "reality," as they mock Matilda's interest in reading and deep thinking. They wish she were never born and refuse to recognize that she is a girl, not a boy, because of her brilliance and love of learning. She fights them also, knowing that "nobody else is gonna put it right for me."

She is sick of them all. She is thoughtful, introspective, philosophical, and an avid reader. She has gumption, is fearless, and stands up to illegitimate authority figures. She is an exemplary heroine for our historical moment when ignorance and functional illiteracy have become the norm and American society has devolved into a cacophony of stupidities flashing across electronic screens as cruelty and violence dominate the news.

To enter Bowker Auditorium for this play is take a redemptive bath. One emerges cleansed and hopeful, filled with joy that revolt against ignorance and cruelty is possible and children can teach us this.

To say I loved this performance is an understatement. It blew me away.

Educated in the classics, philosophy, literature, theology, and sociology, I am a former professor of sociology. My writing on varied topics has appeared widely over many years. I write as a public intellectual for the general public, not (more...)
Related Topic(s): Children; Entertaining; Ignorance; Injustice; Inspirational; Love; Rebellion; Revolt; Theater; Thinking, Add Tags
Add to My Group(s)
Go To Commenting
The views expressed herein are the sole responsibility of the author and do not necessarily reflect those of this website or its editors.