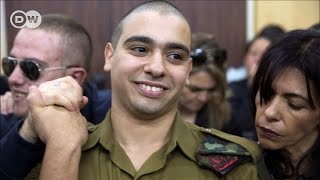 Elor Azaria -- Killing a wounded enemy is moral?
(Image by YouTube, Channel: DW (Kiswahili))   Details   DMCA
A FEW days ago I happened upon an excellent British movie, "Testament of Youth," based on the memoirs of Vera Brittain.

Vera tells her story, the story of a British girl who grew up in a bourgeois family without worries or sorrows, when World War I put an end to that paradise. Her brother, her friends and her fiance' were killed one by one in the terrible mudscapes of France. She enlisted as a nurse near the front and dealt with hundreds of wounded and dead. The tender country girl turned into a hardened woman.

The scene which impressed me most occurs when she is posted to a hut full of wounded Germans. A German officer, not so young, is dying. In his delirium he sees his beloved, catches the hands of Vera and whispers "Is that you, Clara?" and Vera answers in German "Ich bin hier," I am here. With a happy smile on his lips, the German dies.

On the morrow of the war, an English crowd demands a vengeful peace. Vera takes the stage and tells of this experience. The crowd falls silent.

THE MOVIE brought me back to the affair of Elor Azaria, the soldier who killed a seriously wounded Arab attacker lying helpless on the ground. He has been sharply condemned by the military court but punished with the ridiculously light prison term of a year and a half. His publicity-grabbing attorney has appealed.

Killing a wounded or captured enemy is a war crime. Why?

For many people, this is a mystery. War is the realm of killing and destroying. Soldiers are decorated for killing. So why is it suddenly a crime to kill a wounded enemy? How is it possible to talk about a law of war when war itself breaks all laws? An army that trains its soldiers to kill, how can it demand from them to show mercy?

From the beginnings of humankind, war has been a human condition. It started from the primitive tribe, which defended its limited resources of food from preying neighbors. Neighbors killed were resources gained.

The limits to the ravages of war were fixed after one of the most awful conflicts in history -- the Thirty Years' War (1618-1648). Its main battlefield was Germany -- a flat country in the center of Europe, without defensible borders. Foreign armies entered it from all sides to fight it out between themselves. Armies devastated entire cities, killing, raping and looting.

It started as a war of religion, but became a war for supremacy and gain.

Millions died. In the end, two thirds of Germany was devastated, one third of the German population exterminated. One of the results was that the Germans, lacking any natural, defensible borders like seas and mountains, created an artificial border: a powerful army. It was the beginning of German militarism, which reached its climax in the Nazi frenzy.

WITNESSING THE atrocities of the Thirty Years' War, humanists pondered ways to limit warfare and create a core of international law. The outstanding proponent was a Dutchman Hugo de Groot ("Grotius"), who laid the foundations for the rules of war.

How can a war be limited? How can arms be "pure," when their very purpose is to kill and destroy? Grotius laid down a simple principle: nothing can be done to limit the means and practices necessary for winning a war. No army will respect such limitations.

But in war, terrible things happen which have nothing to do with victory. Killing civilians, prisoners and the wounded does not contribute to victory. Sparing their lives is good for all sides. If I spare the lives of captured enemy soldiers and the enemy spares the lives of my own soldiers who are captured, everybody wins.

Related Topic(s): Crime; Israel; Killing; Moral Values; Soldiers; Wars, Add Tags
Add to My Group(s)
Go To Commenting
The views expressed herein are the sole responsibility of the author and do not necessarily reflect those of this website or its editors.