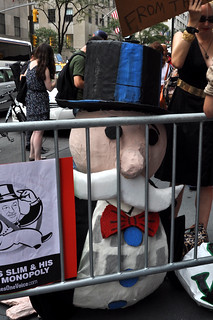 billionaires
(Image by Michael Fleshman)   Details   DMCA
>
The Wall Street Journal reports the number of billionaires in the world has increased by seven percent to 2325. More of them are in the USA-- by hundreds-- than anywhere else.
If you want to know the most dangerous people in the world, look to those billionaires and other ultra wealthy people. There may be some good ones amongst them but even the good ones should be suspect. They can't help themselves. They, as they climb the heights of power, become accustomed to privileges that include immunity from laws and from ethics. They use their money, influence and power to evade regulations, corrupt politicians, or just unduly influence them.
Billionaires are a symptom of the worst aspects of capitalism, industrialization and even civilization. They rise to the top of a system that should not go that high.
The economic system we now have creates them. It could also eliminate them. When I say eliminate, I mean make it impossible for anyone to have that much money. It should start with the total removal of the ability to become a billionaire by gift or inheritance. I'd go further. Wealth-x-- a company that specializes in expertise on ultra wealthy-- people possessing more than $30 million. That seems like a good way to set the limit. Don't allow heirs to receive more than $30 million. Don't allow cumulative gifts to exceed $30 million.
But we need to go further. We need to prevent the next tech-wunderkind from becoming a billionaire. That may seem daunting, even impossible, but if we can land on the moon, we can make this happen The first step is to decide that this is important. The rest is just details. Ebola is nothing compared to the death and destruction that billionaires cause. Look to coal miners who have died, victims of defective cars who have died, cancer and heart disease victims who have died because of unhealthy, even deadly foods, soldiers and the locals who are victims of wars fought to protect or gain wealth for corporations and their wealthy owners.
The wealthy and their propagandists would attempt to suggest that anyone who criticizes great wealth is jealous. That's spin. Here's my spin. Ultra-wealth is an despicable obscenity, among the worse of all immoralities. That's not new. The bible says it is easier to pass a camel through the eye of a needle than for a rich man to get into heaven. That's an old meme that needs refreshing.
Here's a way to think about it. Success is good in moderation. Make a few million. Great. But after you make $10 million start giving a lot away. And never make more than $30 million, not ever. If you come close, start figuring out how to give it away to employees, to suppliers. Start looking at what Noam Chomsky and others talk about as externalities-- costs that were not originally factored into your profit equation, like the environment, global warming, the community you used to make the money, the system you depended upon for the reliability and safety of the business, the people who your new idea led to losing jobs.
Figuring out what to do with the billionaires' and ultra-wealthy's money, with the money that comes with instant success from going public is another one of those problems that seems really difficult to figure out how to implement. But like a moon landing, though daunting, we can figure it out. The first step is to decide that we don't want to have people who are so wealthy, powerful and influential.

From flickr.com/photos/59159563@N04/15016686257/: TIM THE TSAR NIKOLAJ II ALEXANDROVICH AND THE TSARITSA ALEXANDRA FJODOROVNA
(Image by Unknown Owner)   Details   DMCA
In the past, kings, emperors, emirs, tsars, etc. claimed they were chosen by God to justify their unchecked power. We are past those times. No-one should have the power that billionaires and the ultra-wealthy possess. It is essential and necessary that people be prevented from reaching such levels of power, at least without being democratically elected.
When I suggest this idea, people bring up Bill Gates and Warren Buffett and their pledge to give away their money. That's not good enough for me. They are still too powerful. Power is a very dangerous thing. It is so easily abused.
I am not opposed to success. On the contrary, I believe that if we had a culture that did not accept or permit the billionaire and ultra-wealthy hoarders of wealth to hold on to so much wealth it would be available to reward many more successes, many more hard-working, creative, visionary people.
We need a societal change in values, one that characterizes ultra-wealth as offensive, sinful, vile and ugly.

Related Topic(s): Billionaires; Ebola; Monsters; Power, Add Tags
Add to My Group(s)
Go To Commenting
The views expressed herein are the sole responsibility of the author and do not necessarily reflect those of this website or its editors.