DISCLAIMER: The following essay is entirely the work of satirist and self-appointed political pundit, CJ Hopkins, and does not reflect the views and opinions of the Consent Factory, Inc., its staff, or any of its agents, subsidiaries, or assigns. Republished from The Consent Factory. 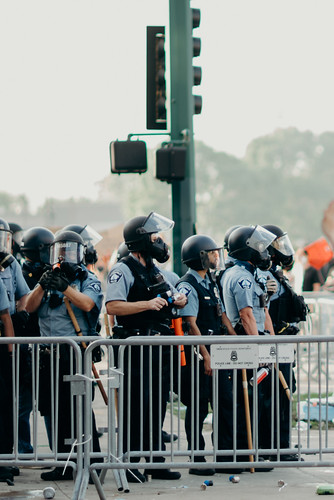 Well, it looks like the Resistance's long-anticipated "Second Civil War" has finally begun " more or less exactly on cue. Rioting has broken out across the nation. People are looting and burning stores and attacking each other in the streets. Robocops are beating, tear-gassing, and shooting people with non-lethal projectiles. State National Guards have been deployed, curfews imposed, "emergencies" declared. Secret Servicemen are fighting back angry hordes attempting to storm the White House. Trump is tweeting from an "underground bunker." Opportunist social media pundits on both sides of the political spectrum are whipping people up into white-eyed frenzies. Americans are at each other's throats, divided by identity politics, consumed by rage, hatred, and fear.

Things couldn't be going better for the Resistance if they had scripted it themselves.

Actually, they did kind of script it themselves. Not the murder of poor George Floyd, of course. Racist police have been murdering Black people for as long as there have been racist police. No, the Resistance didn't manufacture racism. They just spent the majority of the last four years creating and promoting an official narrative which casts most Americans as "white supremacists" who literally elected Hitler president, and who want to turn the country into a racist dictatorship.

According to this official narrative, which has been relentlessly disseminated by the corporate media, the neoliberal intelligentsia, the culture industry, and countless hysterical, Trump-hating loonies, the Russians put Donald Trump in office with those DNC emails they never hacked and some division-sowing Facebook ads that supposedly hypnotized Black Americans into refusing to come out and vote for Clinton. Putin purportedly ordered this personally, as part of his plot to "destroy democracy." The plan was always for President Hitler to embolden his white-supremacist followers into launching the "RaHoWa," or the "Boogaloo," after which Trump would declare martial law, dissolve the legislature, and pronounce himself Fuhrer. Then they would start rounding up and murdering the Jews, and the Blacks, and Mexicans, and other minorities, according to this twisted liberal fantasy.

I've been covering the roll-out and dissemination of this official narrative since 2016, and have documented much of it in my essays, so I won't reiterate all that here. Let's just say, I'm not exaggerating, much. After four years of more or less constant conditioning, millions of Americans believe this fairy tale, despite the fact that there is absolutely zero evidence whatsoever to support it. Which is not exactly a mystery or anything. It would be rather surprising if they didn't believe it. We're talking about the most formidable official propaganda machine in the history of official propaganda machines.

And now the propaganda is paying off. The protesting and rioting that typically follows the murder of an unarmed Black person by the cops has mushroomed into "an international uprising" cheered on by the corporate media, corporations, and the liberal establishment, who don't normally tend to support such uprisings, but they've all had a sudden change of heart, or spiritual or political awakening, and are down for some serious property damage, and looting, and preventative self-defense, if that's what it takes to bring about justice, and to restore America to the peaceful, prosperous, non-white-supremacist paradise it was until the Russians put Donald Trump in office.

In any event, the Resistance media have now dropped their breathless coverage of the non-existent Corona-Holocaust to breathlessly cover the "revolution." The American police, who just last week were national heroes for risking their lives to beat up, arrest, and generally intimidate mask-less "lockdown violators" are now the fascist foot soldiers of the Trumpian Reich. The Nike corporation produced a commercial urging people to smash the windows of their Nike stores and steal their sneakers. Liberal journalists took to Twitter, calling on rioters to "burn that sh*t down!" " until the rioters reached their gated community and started burning down their local Starbucks. Hollywood celebrities are masking up and going full-black bloc, and doing legal support. Chelsea Clinton is teaching children about David and the Racist Goliath. John Cusack's bicycle was attacked by the pigs. I haven't checked on Rob Reiner yet, but I assume he is assembling Molotov cocktails in the basement of a Resistance safe house somewhere in Hollywood Hills.

Look, I'm not saying the neoliberal Resistance orchestrated or staged these riots, or "denying the agency" of the folks in the streets. Whatever else is happening out there, a lot of very angry Black people are taking their frustration out on the cops, and on anyone and anything else that represents racism and injustice to them.

This happens in America from time to time. America is still a racist society. Most African-Americans are descended from slaves. Legal racial discrimination was not abolished until the 1960s, which isn't that long ago in historical terms. I was born in the segregated American South, with the segregated schools, and all the rest of it. I don't remember it - I was born in 1961 - but I do remember the years right after it. The South didn't magically change overnight in July of 1964. Nor did the North's variety of racism, which, yes, is subtler, but no less racist.

Fomenting racial division has been the Resistance's strategy from the beginning. A quote attributed to Joseph Goebbels, "accuse the other side of that which you are guilty," is particularly apropos in this case. From the moment Trump won the Republican nomination, the corporate media and the rest of the Resistance have been telling us the man is literally Hitler, and that his plan is to foment racial hatred among his "white supremacist base," and eventually stage some "Reichstag" event, declare martial law and pronounce himself dictator. They've been telling us this story over and over, on television, in the liberal press, on social media, in books, movies, and everywhere else they could possibly tell it.

So, before you go out and join the "uprising," take a look at the headlines today, turn on CNN or MSNBC, and think about that for just a minute. I don't mean to spoil the party, but they've preparing you for this for the last four years.

Not you Black folks. I'm not talking to you. I wouldn't presume to tell you what to do. I'm talking to white folks like myself, who are cheering on the rioting and looting, and are coming out to "help" you with it, but who will be back home in their gated communities when the ashes have cooled, and the corporate media are gone, and the cops return to "police" your neighborhoods.

***If, for whatever inexplicable reason, you appreciate Mr. Hopkins' work and would like to support it, please go to his Patreon page  (where you can contribute as little $1 per month), or send your contribution to his PayPal account , so that maybe he'll stop coming around our offices trying to hit our staff up for money. Alternatively, you could purchase his satirical dystopian novel,  (more...)
Related Topic(s): America; Change; Obama; Propaganda; Trump, Add Tags
Add to My Group(s)
Go To Commenting
The views expressed herein are the sole responsibility of the author and do not necessarily reflect those of this website or its editors.