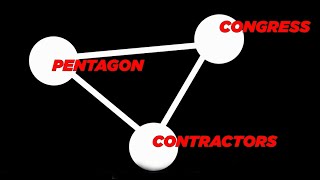 As Trump stokes tensions around the world, he's adding fuel to the fire by demanding even more Pentagon spending. It's a dangerous military buildup intended to underwrite endless wars and enrich defense contractors, while draining money from investment in the American people.

President Dwight D. Eisenhower once noted, "Every gun that is made, every warship launched, every rocket fired signifies, in the final sense, a theft from those who hunger and are not fed, those who are cold and are not clothed."

Eisenhower was a Republican and a former general who helped win World War II for the allies, yet he understood America's true priorities. But Washington -- and especially Trump -- have lost sight of these basic tradeoffs.

Since 2001, the Pentagon budget has soared from $456 billion -- in today's dollars -- to $700 billion, including the costs of the wars in Iraq and Afghanistan and other national security expenses. All told, when you include spending on the military and war, veterans' benefits, and homeland security, military-related spending now eats up 67 percent of all federal discretionary spending.

According to the 2018 Military Balance report by the International Institute of Strategic Studies, the United States already spends more on the military than the next 10 nations combined. Even if the Pentagon budget were cut in half, the United States would still outspend China, Russia, Iran, and North Korea combined.

The military budget has become bloated with waste and abuse. According to the Pentagon's own internal figures, the department could save at least $125 billion by reducing operational overhead.

Despite all this, some still argue that military spending is necessary to support good-paying jobs and economic growth. Baloney. America would be much better served by a jobs program that invested in things we really need -- like modern roads and highways, better school facilities, public parks, water and sewer systems, and clean energy -- not weapons systems.

The biggest reason for increases in Pentagon spending is the incredible clout of the military-industrial complex -- Eisenhower's term. Every year, defense contractors spend millions of dollars on lobbying and campaign contributions to keep federal dollars flowing their way. More than 80 percent of top Pentagon officials have worked for the defense industry at some point in their careers, and many will go back to work in the defense industry.

Since taking office, Trump has increased military spending by more than $200 billion. Let's take a second to look at how else that $200 billion could be spent. We could, for example:

And meet the growing needs for low-income housing, providing safe living conditions for families and the elderly.

Related Topic(s): International; Military Industrial Complex; Military Spending; Pentagon; Waste, Add Tags
Add to My Group(s)
Go To Commenting
The views expressed herein are the sole responsibility of the author and do not necessarily reflect those of this website or its editors.