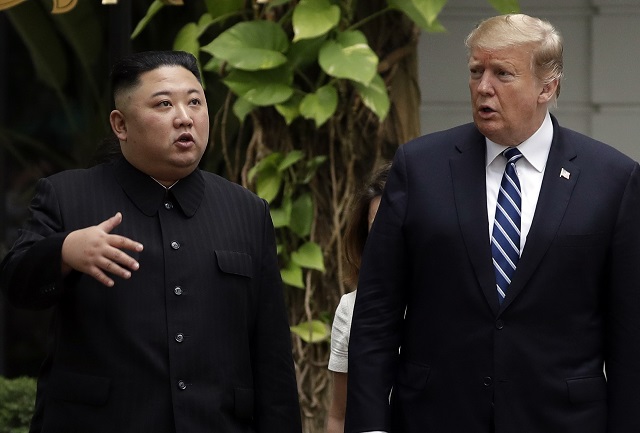 Did Trump deliberately mislead Kim about the administration's demands or has Trump's position simply hardened over time?
(Image by Washington Post)   Details   DMCA

Here are six of the media's biggest lies about North Korea:

1Did North Korea end the negotiations in Hanoi because Trump refused to lift sanctions?

No. That's not what happened at all. Kim Jong un made a serious offer to permanently halt all long-range rocket and nuclear tests and to "completely dismantle all the nuclear production facilities" at Yongbyon (the DPRK's primary nuclear enrichment facility) in exchange for the partial lifting of sanctions that targeted North Korean civilians. Kim did not present his offer as an ironclad demand from which he was unwilling to budge, but as a starting point for discussions just as one would expect during negotiations. But the Trump team never seriously considered Kim's offer, insteadat the advice of neocon warlord, John Bolton the Trump delegation surprised Kim with a take-it-or-leave-it ultimatum that included the "elimination of the DPRK's "chemical and biological weapons, "their ballistic missile program" along with complete denuclearization. Bolton said that no sanctions would be lifted until this comprehensive disarmament plan was implemented and verified by Washington's weapons inspectors. These unrelated demands were not part of previous discussions nor were they contained in the earlier agreements in Singapore. They were concocted with the clear intention of sabotaging the summit and ensuring that no agreement between the sides would be reached.

2Has the Trump administration honored the agreement it made at the Singapore Summit?

No. On June 12, 2018 President Trump signed a joint declaration agreeing to the following:

While Kim has taken a number of steps to normalize US-DPRK relations (including the cessation of all ballistic missile and nuclear weapon tests, the destruction of one former nuclear testing site, returning the remains of 55 US servicemen who were killed during the Korean War back to US custody, removing mines from the DMZ, and actively engaging in cultural and economic projects with leaders in the South) the Trump administration has done absolutely nothing aside from terminating the provocative large-scale joint military exercises that are used as a rehearsal for invading the North and toppling the government in Pyongyang. Trump has made no effort to normalize relations or to create a "stable peace regime" on the peninsula.

Also, last Thursday, the US violated the Singapore agreement by launching another round of joint-military drills called "Dong Maeng" (which means "alliance" in Korean). While the maneuvers have been ignored by the western media, they were excoriated by North Korea's state-run news agency KCNA which blasted the drills as a "threat" to peace and stability on the Korean Peninsula."

3Did Kim Jong un agree to decommission his nuclear arsenal and end his ballistic missile program BEFORE the Trump administration eased sanctions?

Not a chance. On September 18, 2018: Kim met South Korean President Moon Jae-in in Pyongyang where the the two leaders agreed to expand the "cessation of military hostilities", advance economic, humanitarian and cultural cooperation and exchanges, pursue complete denuclearization on the Korean Peninsula. North Korea committed to dismantle the Dongchang-ri missile engine test site (which it has done) and promised to take additional steps, like the dismantling of the nuclear facilities in Yongbyon, if the United States "takes corresponding measures in accordance with the spirit of the June 12 US-DPRK Joint Statement."

The promise of denuclearization was never a commitment to unilaterally disarm while the US did nothing. The North expected both sides to make reciprocal gestures in order to build confidence. Instead, the Trump administration tightened sanctions which increased Pyongyang's distrust.

In any event, the original agreement implied a gradual disarmament after there was (a) an improvement in relations and (b) the building of "a lasting and stable peace regime."

4Did the Trump administration agree to a "phased" or gradual disarmament similar to what was hashed out in Singapore?

Yes. On January 31, 2019, Special envoy for North Korea Stephen Biegun said the administration was prepared to move step-by-step towards complete denuclearization in parallel with working towards peace in Korea and that it is willing to defer a complete declaration of North Korea's nuclear assets. Here's an excerpt of Biegun's comments at Stanford University:

"We have communicated to our North Korean counterparts that we are prepared to pursue simultaneously and in parallel all of the commitments our two leaders made in their joint statement at Singapore last summer.