Sleeping, he finds himself 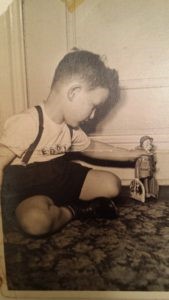 Trapped in a mazeAs if in a bad dreamDroning in his child's earsIn the middle of a long night.Frantic, desperately seeking exitFrom this recurring nightmareOf terrifying sleep. Freedom?Traps and fears ride one horse,Said the mechanical soldier to the boy.Look at me, stiff and inflexible,Following the same pattern every timeYou wind me up. I march blindly,Gladly to my death on cue.But I never really die.I march for you my mastersAgain and again. You hold the key.And that maze that seems to trap youIs only the spell cast by thoseWho made me, not in your image,But in the mold of their own handsStiffened by years of servitudeTo a God who binds themOf their own accord. The God of death.

And Mechanical Mikey faded with the years,
But his message followed the boy to manhood
Flowing under the surface movements of a model son,
Stiffened into rectitude and the dutiful demeanor
Of a Marine. He had become a killer of his own will.
But then they marched him like Mechanical Mikey,
And in that reversal of the roles of childhood
Mikey's words merged to become a torrent,
Forcing their way through every labyrinthine lane
Set to trap him in its twisted tale of dreadful death,
The manly myth that says: "My rifle is my life."
Unbound, unwound he went freely forth to see,
To see with burning eyes a strange new light
That almost struck him blind in dazed delight.


He found himself riding the high-flung back
Of a voluptuous sea horse, throwing traps and fears
To the whirling wind, holding on for dear life
As the voice from the whirlwind whistled a dirge
For Mikey who had died, dead of mechanical heart
Failure, having been choked to death. Lazarus,
having emerged from the peace of oblivion,
Knew he was destined for the awful task of living
Freely, listening to the spirit call its will across the deep,
Drawing him out of the maze into a dazzling new day.
So he rose, went forth into a throbbing warm world,
A place he had denied for far too many years,
Where no dead soldier craves a parent's tears.

Related Topic(s): Dreams; Masters; Mechanical_projects; Message; Nightmare; Soldiering; Soldiers Killed, Add Tags
Add to My Group(s)
Go To Commenting
The views expressed herein are the sole responsibility of the author and do not necessarily reflect those of this website or its editors.