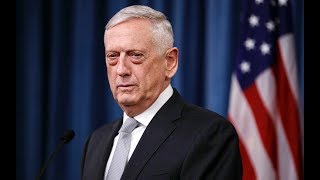 The resignation letter of Secretary of Defense James Mattis that was published last Thursday revealed much of the Deep State mindset that has produced the foreign policy catastrophes of the past 17 years. Mattis, an active duty general in the Marine Corps who reportedly occasionally reads books, received a lot of good press during his time at Defense, sometimes being referred to as "the only adult in the room" when President Donald Trump's national security and foreign policy team was meeting. Conveniently forgotten are Mattis comments relating to how to "Be polite, be professional, but have a plan to kill everybody you meet." His sobriquet in the Corps was "Mad Dog."

In the media firestorm that has followed upon General Mattis's resignation, he has been generally lauded as a highly experienced and respected leader who has numerous friends on both sides of the aisle in Congress. Of course, the press coverage should be taken with a grain of salt as it is designed less to praise Mattis and more to get at Trump over the decision to leave Syria, which is being assailed by both neoliberals and neoconservatives who believe that war is the health of the state.

The arguments against the Trump decisions to depart from Syria and downsize in Afghanistan are contrived for the most part and based on the premise that American intervention in places that Washington deems not to be sufficiently promoting democracy, rule of law and free trade is a good thing. Peter Ford, former British Ambassador to Syria, put it nicely when discussing the reaction in the media: "Trump's critics...will have the vapors about 'losing ground to Russia,' 'making Iran's day,' and 'abdicating influence,' but their criticism is ill-founded. Contrary to their apparent belief, the US does not have a God-given right to send its forces anywhere on the planet it deems fit. Withdrawal will see the US in one respect at least follow the international rules-based system we are so fond of enjoining on others, and will therefore be a victory of sorts for upholders of international law."

The central argument of the Mattis resignation letter that is being cited by critics relates to Washington's relationship with the rest of the world and is framed as a failure by President Trump to understand who are friends and who are enemies. Mattis wrote...

"One core belief I have always held is that our strength as a nation is inextricably linked to the strength of our unique and comprehensive system of alliances and partnerships. While the US remains the indispensable nation in the free world, we cannot protect our interests or serve that role effectively without maintaining strong alliances and showing respect to those allies.

"Similarly, I believe we must be resolute and unambiguous in our approach to those countries whose strategic interests are increasingly in tension with ours. It is clear that China and Russia, for example, want to shape a world consistent with their authoritarian model gaining veto authority over other nations' economic, diplomatic, and security decisions to promote their own interests at the expense of their neighbors, America and our allies. That is why we must use all the tools of American power to provide for the common defense.

"My views on treating allies with respect and also being clear-eyed about both malign actors and strategic competitors are strongly held and informed by over four decades of immersion in these issues. We must do everything possible to advance an international order that is most conducive to our security, prosperity and values, and we are strengthened in this effort by the solidarity of our alliances."

General Mattis does indeed hold views that were shaped by four decades of experience, but most of it was bad and produced wrong conclusions about America's place in the world. The Cold War was essentially a bi-polar conflict pitting two adversaries that had the ability to destroy all life on the planet. It generated a Manichean viewpoint on good vs. evil that did not reflect reality which was succeeded by a global war on terror declared by Washington that also exploited the good and evil paradigm. Mattis was a product of that kind of thinking, which was also fueled by the concept of American exceptionalism, which saw the United States as the proper promoter and enforcer of universal values.

There is, of course, another viewpoint, which is that American blundering and use of force as a first option has, in fact, created the current dystopia. The United States is not currently venerated as a force for good, quite the opposite. Opinion polls suggest that Washington is overwhelmingly viewed negatively worldwide and it is perceived as being the nation most likely to start wars. That is not exactly what the nation's Founders envisioned back in 1783.

Trump is right about leaving Syria where nothing beyond prolonging the bloody conflict is being accomplished. Mattis is wrong about supporting "friends." For an educated man, he misreads history. The First World War and Second World War developed as they did because of alliances. Countries that appear friendly can exploit relationships with other more powerful nations that will have devastating results. Alliances should be temporary, coming and going based on the interests of the nations involved. In the Middle East, Israel and Saudi Arabia are not actually friends of the United States, and are engaged instead in manipulating Washington to suit their own purposes.

Mattis does not understand that and sees a permanent state of war requiring the continued existence of NATO, for example, as a vehicle for deterrence and peace. It is neither. Its very existence depends on a perception of being threatened even where no threat exists, which has poisoned the relationship with Russia since the fall of communism. Worse still, that false perception of threat can lead to war and a global nuclear holocaust.

Philip Giraldi is the executive director of the Council for the National Interest and a recognized authority on international security and counterterrorism issues. He is a former CIA counter-terrorism specialist and military intelligence officer who served eighteen years overseas in Turkey, Italy, Germany, and Spain. Mr. Giraldi was awarded an MA and PhD from the University of London in European History and holds a Bachelor of Arts with Honors from the University of Chicago. He speaks Spanish, Italian, German, and Turkish. His columns on terrorism, intelligence, and security issues regularly appear in The American Conservative magazine, Huffington Post, and antiwar.com. He has written op-ed pieces for the Hearst Newspaper chain, has appeared on Ă ‚¬Ĺ"Good Morning America,Ă ‚¬ ť MSNBC, National Public Radio, and local affiliates of ABC television. He has been a keynote speaker at the Petroleum Industry Security Council annual meeting, has spoken twice at the American Conservative UnionĂ ‚¬ „ s annual CPAC convention in Washington, and has addressed several World Affairs Council affiliates. He has been interviewed by the Canadian Broadcasting Corporation, the British Broadcasting Corporation, BritainĂ ‚¬ „ s Independent Television Network, FOX News, Polish National Television, Croatian National Television, al-Jazeera, al-Arabiya, 60 Minutes, and other international and domestic broadcasters.

Related Topic(s): Mattis Resignation; Security; Syria, Add Tags
Add to My Group(s)
Go To Commenting
The views expressed herein are the sole responsibility of the author and do not necessarily reflect those of this website or its editors.