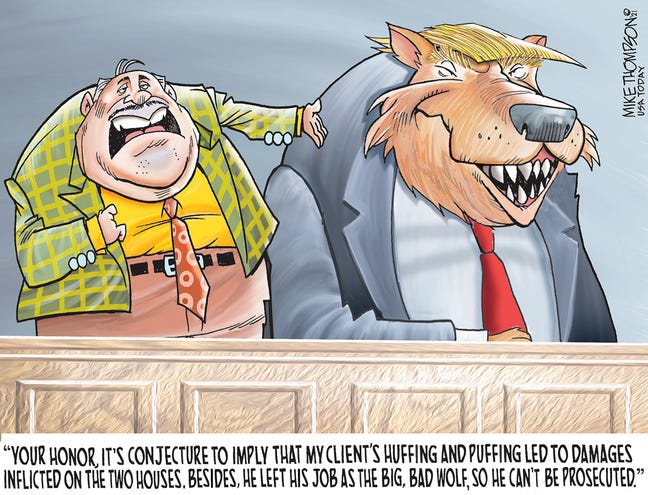 So Mitch McConnell says, "We have a criminal justice system in this country. We have civil litigation. And former Presidents are not immune from being held accountable by either one." He adds, (Trump) hasn't gotten away yet-- yet." You gotta wonder if what he means with the second "yet" is that somehow he'll try to help Donald Trump against the landslide of trouble that is going to drop on him.

And although I'm sure Joe Biden would prefer Trump to just go away, and not take up the time everybody in both Parties says is being (or will be) wasted in the fight against the pandemic by hounding Trump through the DOJ, it's likely to be impossible to avoid some sort of aftershocks in the federal government due to Trump's behavior and his expected but unfortunate acquittal according to the rules of impeachment.

Merrick Garland would have been a superior Supreme Court Justice, had McConnell not whipped his Party against him for a year, first, to avoid a Barack Obama-named Justice, but also to do nothing more or less than distract from the Republican candidate's outlying vengeance-for-the forgotten-white-worker narrative.

Will that mean that as AG he will be inclined to go after Trump? I don't think he is petty enough to do so under present circumstances. However, the sudden appearance of Rep. Jaime Herrera Beutler (R-WA) is proof that some scandal, at some high level, might make it impossible to avoid federal prosecution.

And grand juries take a while; the Democrats' sounder strategy may be to let a couple of those Claymores blow up in Trump's face before making any legal move against him.

Federal prosecution may be politically unnecessary, regardless of what some people may say about completely doing justice.

However, this all could have been so simple, could have been done in a day or two, and been voted on on the 19th of January, had the House brought the proper count of impeachment: to wit, the Attempted Interference with a legally conducted election by the President in the case of his phone call to Georgia Secretary of State Brad Raffensperger. They could have brought both counts, and conviction would have been automatic, unless every GOP Senator who voted for acquittal on the Attempted Interference count wanted to be on the record as condoning the crime that Trump's phone call revealed.

Related Topic(s): Trump Against Democracy; Trump Cornered; Trump Impeachment; Trump Insurrection; Trump Loses Immunity To Prosecution; Trump Phone Call To Georgia Sec Of State, Add Tags
Add to My Group(s)
Go To Commenting
The views expressed herein are the sole responsibility of the author and do not necessarily reflect those of this website or its editors.