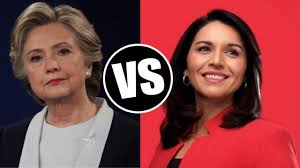 Ladies and gentlemen! Brothers and sisters! Friends and neighbors!

Here! Live! Tonight! In coordination with the Most Powerful Women Summit! For your listening pleasure, and perhaps some tiny bit of instruction, we bring you the debate of the century! Featuring one of the most well-known and influential women in the world going toe-to-toe with a political upstart!

It is with the greatest satisfaction that we stream this historic exchange directly into the homes of millions of our fellow citizens. It's become more than a debate. It's a symbolic cleansing! A public spectacle that doesn't require spectacles! A rhetorical throw-down throw-down junkies have been dreaming about since Reagan! It's the progressive versus the "progressive who gets things done"! The liberal versus the neo-liberal! It's Medicare for All and a Green New Deal versus status-quo austerity and eternal war. A voice for the people versus the voice of the elites! The air is positively electric! The tension is thick as a cup of molasses! It's crazy! Look at all these exclamation points!

On one side, Tulsi Gabbard, a Major in the US Army Reserves and a four-term member of the US House of Representatives from the great state of Hawai'i. On the other, Hillary Clinton, a former-first lady, former US Senator, former Secretary of State, and twice-failed Democratic candidate for US president. The ideological fault lines could not be clearer. Let's go to the tale of the tape.

Secretary Clinton steps into the proverbial ring as an establishment heavyweight and the obvious favorite. She has her share of critics. But she's proven to be a tough competitor, relentless, smart, with almost thirty years' experience playing power games with the big kids. She is versed in domestic and international policy, she has friends in all the right places, and she's admired and respected by her peers.

Her policy achievements include, but are not limited to: voting for the Iraq War; selling fracking to the world; pushing the corporate-friendly TPP; green-lighting the military coup in Honduras; plotting the overthrow of Yanukovych in Ukraine; destroying Libya(who can forget Clinton's response to Quaddafi's murder?); running a covert propaganda campaign targeting the UN; cheating to win the 2016 Democratic nomination for president; and overseeing the "pay-to-play" corruption at the heart of her "foundation," including the Uranium One deal and the weapons sale to Saudi Arabia.

Her opponent, Tulsi Gabbard, appears to have little going for her. She's spirited, but green around the edges and unfamiliar with how politics are played at this level. She's not in Hawai'i anymore, Toto. She's got a national audience now. The whole country. Every show, every night. It's no secret she gets no support from her party. She's already being slandered as an apologist for Assad in major newspapers and on national tv, no less! So why not take on the Democratic leadership! A number of commentators have suggested she looks out of her league. The more she's attacked, the more she flails, the worse it looks. Close your eyes, children. The results will not be pretty. Think Bernie Sanders 2016.

Her list of achievements includes, but is not limited to: elected to Hawai'i House of Representatives in 2002; elected to US House of Representatives in 2013 (re-elected three times); joined the Hawaii Army National Guard in 2004; graduated from Officers Candidate School with honors in 2007; served two tours of duty, one in Iraq (2004-2005) and one in Kuwait (2008-2009); elected as vice-chair of the DNC in 2016, but resigned when she discovered DNC officials were rigging the Democratic primaries; and in 2019 declared her candidacy for the Democratic nomination for president.

Finally, the stage is set. The players are ready. Hillary opens with the first volley:

" . . . I'm not making any predictions but I think [the Russians have] got their eye on somebody who is currently in the Democratic primary and are grooming her to be the third party candidate. She's the favorite of the Russians. They have a bunch of sites and bots and other ways of supporting her so far."

Clinton later clarified that it was in fact Tulsi Gabbard she had in mind. The short of it: she is accusing a major in the army and a member of Congress of being a traitor. If tried and convicted, Gabbard could get the death penalty. The conversation just got serious.

"Great! Thank you @HillaryClinton. You, the queen of warmongers, embodiment of corruption, and personification of the rot that has sickened the Democratic Party for so long, have finally come out from behind the curtain . . . "

"Hillary & her gang of rich, powerful elite are going after me to send a msg to YOU: 'Shut up, toe the line, or be destroyed.' But we, the people, will NOT be silenced. Join me in taking our Democratic Party back & leading a govt of, by & for the people!"

Related Topic(s): Corruption; Democratic; Other; Policy; President, Add Tags
Add to My Group(s)
Go To Commenting
The views expressed herein are the sole responsibility of the author and do not necessarily reflect those of this website or its editors.