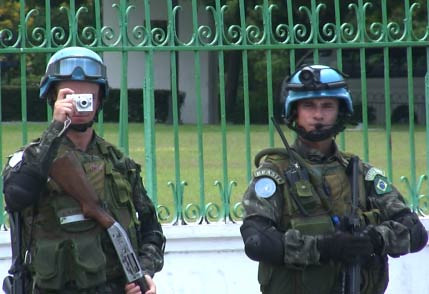 (Image by Unknown Owner)   Details   DMCA
Haiti experts have repeatedly criticized the US for excluding the Haitian government and Haitian companies from the reconstruction. The FOIA data proves them right: USAID and the State Department gave money to 6 US government entities and 7 UN agencies, but none to the Haitian government. Moreover, no NGOs or contractors listed in the FOIA were Haitian. How the Government Used Our Money in Haiti: Part II
In a Reuters blog article, Where Haiti's money has gone, Felix Salmon rightly points out that:

"Development is a tricky game, easy to get wrong; as a rule, it only works when the people providing the aid are working at the margin, helping to strengthen existing projects, industries, and institutions, rather than trying to build them all from scratch. Let's target it where it can be most effective, rather than where there happens to have been a newsworthy natural disaster."

However, the majority of his blog article is full of misconceptions, hearsay and disinformation:

"I've had two ministers come up to me this week, personally, and ask what's in it for them," says a frustrated IHRC official. "Since money grows on trees in this disaster, the attitude among Haitian officials is: Just call up your buddies in Washington, and they'll send another check."

The unanswered question is: what "Haitian officials" approached and wanted to know what was in it for them? Name names. Who? When? What are you, a reporter or a rumor monger? Look at the facts as reported by The Haiti Justice Alliance; they have documented proof gathered through a FOIA request that the U.S. excludes the Haitian government and Haitian companies from the reconstruction. The problem with reporting about Haiti is that even when a truth is conveyed, it is invariably wrapped in a lie or misconception.


"Meanwhile, Haiti's suffering if anything is getting worse. Not only are new shantytowns springing up in places like Corail, but disease is now spreading disastrously: cholera hadn't been seen in Haiti for more than 60 years, before the earthquake; it has now infected more than 250,000 Haitians, with no sign that it's remotely under control."

Haiti has never had an outbreak of cholera.
The misconception is left that cholera was started by the conditions in the camps, but this is a lie. The cholera started in the countryside, in Haiti's breadbasket. It has been conclusively proven in many scientific investigations that the UN/MINUSTAH brought cholera to Haiti. The latest was a "whole genome study", which "nails Nepal-Haiti cholera link." The cholera was spread because the Nepalese soldiers in Mirebalais dumped their feces into the Meye river, a tributary of the Artibonite river.


"The first thing to note is that most of the money given to Haiti hasn't even started to be spent yet: a whopping $11 billion was pledged by donor countries and financial institutions in the wake of the earthquake, but if you take the US as a good example, it's so far managed to spend just $184 million of the $1.14 billion allocated to the country. Even the Red Cross is barely halfway into its $479 million fund -- all of which has been earmarked for Haiti, and none of which can be spent elsewhere, no matter how much better it might be put to use in some other context."

Haiti is the scene of an ongoing international crime. It's to be expected that the worst sort of buzzards would be picking its bones clean. The NGOs supported by USAID are expected to return over 90% of the money spent in Haiti back to Washington.


"It's worth remembering, too, that there was reason for optimism regarding the rebuilding of Haiti. There was lots of money, and the country's right on America's doorstep, which also helps. On top of that, it had the best conceivable international ambassador in Bill Clinton, backed up with the full support of the US government in the form of his wife's oft-stated commitment to getting Haiti back on its feet.

Haiti is under occupation. Period. There is no freedom, human rights, sovereignty, autonomy or decision making by Haiti's government. The U.S. and its "partners" are determined to keep real democracy out of the hands of the Haitian people as evidenced by their awareness and endorsement (according to Wikileaks) of the fraudulent nature of he last two major elections in Haiti.

It is a stupid decision on many levels, because every upcoming or anticipated disaster, calamity and mismanagement of resources"etc, is the direct responsibility of those who have imposed detrimental trade policies that have robbed Haiti of the ability to feed its people, that have sponsored coups, fraudulent elections, brought disease, the entire globe's occupying armies to play their war games, the multinational exploiters of Haiti's wealth, and others who use Haiti as their piggy bank and dumping ground for all of their toxic hate, greed and depravity" Speaking of depravity: they also share the responsibility for making Haiti the ground zero for sexual predators of every base/perverted sexual nature imaginable.

"What happens when you drop billions of dollars onto a country like Haiti? Immediately after the earthquake happened, in January 2010, I said that "one of the lessons we've learned from trying to rebuild failed states elsewhere in the world is that throwing money at the issue is very likely to backfire". But that's exactly what we did -- with predictable results."

As a commenter said: "...no one has actually thrown money at Haiti! The vast majority of the $11 billion you cite has not been disbursed. It was only pledged-- and it was pledged over the medium term."

The reoccurring theme of stories like this seem to assume that Haiti is a "basket case" or "failed state" because of the incompetence and corruption of Haitians themselves. See the quoted remark of "a frustrated IHRC official." Here is what should be part of that calculation, but somehow never is:

"On 12 August a group of Cuban guerrillas and Haitian exiles lands on the southern most tip of the country in another attempt to remove Duvalier. They are defeated by the Haitian Army, with the aid of US marines."

Are Haitians entirely to blame for the existing calamitous conditions that the majority is suffering under? How can that be, when the scoundrels, killers, thugs, dictators, drug dealers... etc. can invariably always count on the backing of the U.S. and its acknowledgedly most globally powerful military apparatus, intelligence agencies, institutional aid agencies, and its embedded allies in the mainstream media?


BACKGROUND:
How The Government Used Our Money In Haiti: Part II

"The only aid mechanism devoted specifically to rebuilding rather than relief is the "Office of Transition Initiatives." They put Haiti's future entirely in the hands of two contractors: Chemonics and Development Alternatives, Inc. (DAI)[3].

--"Chemonics raises eyebrows for multiple reasons. First, it's a subsidiary of ERLY Industries, which also owns American Rice. Since the 1980s, American Rice captured half of the Haitian rice market, a shift that Bill Clinton recently admitted was the reason Haiti can no longer feed itself. Moreover, the agricultural program it runs, which revolves around distributing hybrid Monsanto seed, is likely to jeopardize the future of Haiti's agricultural system.

DAI, World Vision, and CHF International have also all been the subject of media scrutiny for their activities both in and out of Haiti.

The Center for Economic and Policy Research described DAI as having a "questionable past" of putting political objectives above humanitarian goals. Last year, World Vision came under fire for using "discredited" aid practices by aid critic Bill Easterly. Finally, CHF International's spending habits were labeled "ostentatious" in a feature that also contained a confession from CHF's field director that the organization has no experience in the role it's filling in Haiti."

"It is true that in early 2003 Foreign Minister Tolentino Dipp asked the Embassy for details about planned military training, and the Embassy furnished this information. This occurred in the context of unfounded press reports alleging that U.S. forces would number in the thousands and that they would be engaged in tasks other than training [emphasis added]."

NOTE: In the above quote from a cable by SouthCom , they are not denying that they provided Special Forces "training" of Haitian "rebels" in the DR in 2003 -- to overthrow of the democratically elected government of Jean-Bertrand Aristide. They just deny that the trainers numbered in "thousands."

In another cable (04SANTODOMINGO1515, CANARD II: DOMINICAN RIFLES FOR HAITI), the writer links the "rebels" to the supply of weapons the Dominicans had purchased through "annual licensed imports": "These are not military weapons; they are pistols, revolvers, hunting rifles and shotguns (never rifles) for use by private security services." they state. But, they conclude the cable by making a direct collation: "We understand that the arms used on this movement and in the capture of Gonaives were largely shotguns, hunting rifles, and pistols."

Chantal Laurent is a Haitian-American who blogs about Haiti, socio-economic, environmental and political issues at thehaitianblogger
Related Topic(s): America Screwing Haiti; Haiti; Haitian Cholera Crisis; Haitian Elections; NGOs; Ngo False Charity In Haiti; US-Haiti Policy; USAID, Add Tags
Add to My Group(s)
Go To Commenting
The views expressed herein are the sole responsibility of the author and do not necessarily reflect those of this website or its editors.