The neocons have been pushed back -- but not defeated 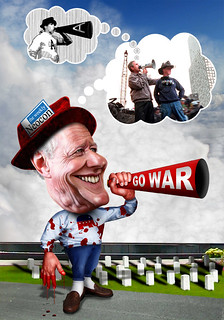 Bill Kristol - Neocon Dreams
(Image by DonkeyHotey)   Details   DMCA
I heard it before I saw it: the horror in the voice of a TV anchor on the morning of September 11, 2001. As my father shook me awake -- "Wake up, look at this!" -- I shot straight up in my bed and beheld the scene unfolding on the television screen: a plane plowing straight into a skyscraper and coming out the other side, sheering off the top like Death wielding a scythe.

I had arrived in New York a few hours earlier on a plane from California, on the first leg of a trip to Serbia. I was slated to travel with a delegation of writers who had been invited to that recently-bombed country by the government of President Vojislav Kostunica, the liberal nationalist successor to the malevolent Slobodan Milosevic. As virtually the only visible opposition to Bill Clinton's "humanitarian" crusade to establish the state of Kosovo -- today the heroin and human trafficking capital of Europe -- Antiwar.com was well known in Serbia, and I was looking forward to visiting the crime scene. But as I watched the drama of 9/11 unfold, I knew I wouldn't be going anywhere.

As news of the attack on the Pentagon was broadcast by a clearly panicked newscaster, a shock of pure fear ran up and down my spine. I recalled that the Indian Point nuclear power plant wasn't all that far away: my father had worked there at some point in his career. I imagined that it probably wasn't all that closely guarded -- and the hair on my neck stood straight up.

Day One of the Long War was dawning.

In the days and months to come, a pall fell over the nation as the smoke emanating from the isle of Manhattan spread out and seemed to cover the whole country. People forget the atmosphere of those dark days: the war hysteria welling up in a collective spasm of fearful vituperation, seeking the closest target. Since Osama bin Laden and the hijackers weren't available, this hate campaign was directed at anyone who dared question the narrative of a blameless and simon-pure America ambushed by demons.

Security immediately surrounded her and escorted her out of the building as she shouted "Stop the warmongering!" -- but before they dragged her out someone in the audience grabbed her banner and tried to pull it out of her hands. She resisted and a tug of war ensued. The man gripped the cloth banner and yanked at it while Michaela stood there steadfastly resisting him, seemingly without exerting much effort, until he finally gave up and collapsed in a heap, falling back in his chair.

The defeated man is no random person: his name is Patrick Clawson and he's the research director of the Washington Institute for Near East Policy (WINEP), a spin-off of the American Israel Public Affairs Committee (AIPAC), the premier lobbying powerhouse that acts as Israel's agent in Washington. Like many neocons, Clawson is a former Trotskyist who decided giving up class war for the War Party was a clever career move. He was a key player in the propaganda barrage that preceded the Iraq war and a fervent supporter of Ahmed Chalabi and his fellow "heroes in error." And as a loyal shill for the government of Israeli Prime Minister Benjamin Netanyahu, Clawson has been a fanatical advocate of war with Iran. At a 2012 WINEP conference on "How to Build US-Israeli Coordination on Preventing an Iranian Nuclear Breakout," Clawson responded to a question from the audience on what the US should do if the negotiations with Iran failed:

"Crisis initiation is really tough. It's very hard for me to see how the United States President can get us to war with Iran.

Related Topic(s): Benjamin Netanyahu; Congress; Iaea; Iran; Israel, Add Tags
Add to My Group(s)
Go To Commenting
The views expressed herein are the sole responsibility of the author and do not necessarily reflect those of this website or its editors.