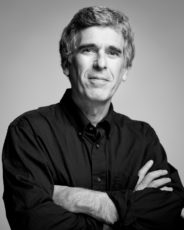 Left activists plan to take on President Donald Trump from Day One, with tens of thousands of protesters promising to show up in Washington to protest his inauguration on Jan. 20 and a major women's march scheduled the next day.

But the challenge for the Left goes deeper than protesting Trump and some of his policies. The difficulty also involves how to build a progressive agenda that is not compromised by corporate Democrats at election time. I discussed these questions with Norman Solomon, media activist, author, former Bernie Sanders Delegate and Rootsaction co-founder.

Dennis Bernstein: Norman Solomon, welcome back. ["] Say a little bit about your background. I want people to know where you're coming from and, if I've got it right, you sort of came in the activists' door.

NS: I did, although, that was not my first ambition. That was to be a major league baseball player and a lawyer, but I was born in the early 50's and the first time I thought about going on a picket line was in 1966.

I lived in Maryland, and there were still segregated apartment buildings, in the suburbs of Washington, D.C. And so, I learned about a picket line, went there, and it's maybe not a natural feeling, to be protesting when you've grown up in white bread, middle-America, but I got acclimated.

DB: And, how I met you as an activist in New York State working for the Fellowship of Reconciliation. You were also beginning to write columns. You also wrote books, and got deeply engaged in the anti-nuclear movement, where I believe you were arrested multiple times, in this country, and other countries.

NS: Blockading nuclear weapons trains, as well as other non-violent actions, to try to shut down nuclear power plants, as well.

DB: And, how did you become a media columnist?

NS: Well, journalism became a lot of my interest and then professional ambition as I was getting out of high school, and so writing and reporting came to seem natural, and so did protesting the horrific Vietnam War, in the late 60's and early 70's. In our culture, I think then as now, in the United States there's this tacit, if not prohibition, at least, looking askance at, the concept of activism and journalism being unified.

I remember when Chinese reporters, before Tiananmen Square, in the 80's were protesting against suppression of the press in China, the U.S. journalists would cheer that on, but wouldn't dream of protesting themselves, to affirm the rights of freedom of the press or human rights. And I think that's a juxtaposition that for me has not made sense.

As with so many other people, including you, Dennis Bernstein, I think the reality is that, if you're a journalist, you are fighting to learn and ventilate and expose truth, [then] that goes hand-in-hand with fighting for human rights, fighting for a society where life is treasured instead of destroyed.

DB: Norman, I want to, sort of, bring you head on with the political struggle now... and before we get into strategy, let me ask you to assess where you think we are now, or what you see as the front-line dangers, given the current situation. We've seen a lot now about where this is going.

NS: Really, on the front-line and the main-line dangers, we're facing the most right-wing administrations out of the federal government, in any of our life times, no matter how old we are. And the consolidation of power, not just that it's a Republican White House coming in and Congress, as well, but how extreme it is.

Related Topic(s): Donald Trump Lies; McCarthyism; Norman Solomon; Trump Protesters, Add Tags
Add to My Group(s)
Go To Commenting
The views expressed herein are the sole responsibility of the author and do not necessarily reflect those of this website or its editors.