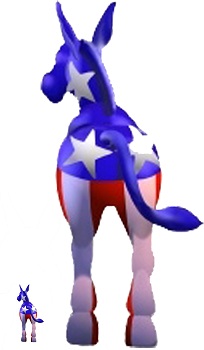 The mindlessness is unbearable. Amnesty International tells us that we must "fight the Muslim ban" because Trump's bigotry is wrecking lives. Anthony Dimaggio at CounterPunch says Trump should be impeached because his Islamophobia is a threat to the Constitution. This is not to single out these two, as the mindlessness is everywhere among those whose worldview is defined by Identity Politics.

One might think that Amnesty International should be fighting against the Bush/Cheney/Obama regime wars that have produced the refugees by killing and displacing millions of Muslims. For example, the ongoing war that Obama inflicted on Yemen results in the death of one Yemeni child every 10 minutes, according to UNICEF. Where is Amnesty International?

Clearly America's wars on Muslims wreck far more lives than Trump's ban on immigrants. Why the focus on an immigration ban and not on wars that produce refugees? Is it because Obama is responsible for war and Trump for the ban? Is the liberal/progressive/left projecting Obama's monstrous crimes onto Trump? Is it that we must hate Trump and not Obama?

The easiest and surest way for the Trump administration to stop the refugee problem, not only for the US but also for Europe and the West in general, is to stop the wars against Muslim countries that his predecessors started. The enormous sums of money squandered on gratuitous wars could instead be given to the countries that the US and NATO have destroyed. The simplest way to end the refugee problem is to stop producing refugees. This should be the focus of Trump, Amnesty, and Dimaggio.

Is everyone too busy hating to do anything sensible?

It is very disturbing that the liberal/progressive/left prefers to oppose Trump than to oppose war. Indeed, they want a war on Trump. How does this differ from the Bush/Obama war on Muslims?

The liberal/progressive/left is demonstrating a mindless hatred of the American people and the President that the people chose. This mindless hatred can achieve nothing but the discrediting of an alternative voice and the opening of the future to the least attractive elements of the right-wing.

Related Topic(s): Muslim; Refugees; Wars, Add Tags
Add to My Group(s)
Go To Commenting
The views expressed herein are the sole responsibility of the author and do not necessarily reflect those of this website or its editors.