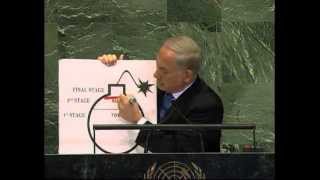 Israeli Prime Minister Benjamin Netanyahu's claim in his theatrical 20-minute presentation of an Israeli physical seizure of Iran's "atomic archive" in Tehran would certainly have been the "great intelligence achievement" he boasted if it had actually happened. But the claim does not hold up under careful scrutiny, and his assertion that Israel now possesses a vast documentary record of a covert Iranian nuclear weapons program is certainly fraudulent.

Netanyahu's tale of an Israeli intelligence raid right in Tehran that carted off 55,000 paper files and another 55,000 CDs from a "highly secret location" requires that we accept a proposition that is absurd on its face: that Iranian policymakers decided to store their most sensitive military secrets in a small tin-roofed hut with nothing to protect it from heat (thus almost certainly ensuring loss of data on CDs within a few years) and no sign of any security, based on the satellite image shown in the slide show. (As Steve Simon observed in The New York Times, the door did not even appear to have a lock on it.)

The laughable explanation suggested by Israeli officials to The Daily Telegraph -- that the Iranian government was afraid the files might be found by international inspectors if they remained at "major bases" -- merely reveals the utter contempt that Netanyahu has for Western governments and news media. Even if Iran were pursuing nuclear weapons secretly, their files on the subject would be kept at the Ministry of Defense, not at military bases. And of course the alleged but wholly implausible move to an implausible new location came just as Netanyahu needed a dramatic new story to galvanize Trump to resist the European allies' strong insistence on preserving the Joint Comprehensive Plan of Act (JCPOA) nuclear deal with Iran.

In fact, there is no massive treasure trove of secret files about an Iran "Manhattan Project." The shelves of black binders and CDs that Netanyahu revealed with such a dramatic flourish date back to 2003 (after which a U.S. National Intelligence Estimate (NIE) said Iran had abandoned any nuclear weapons program) and became nothing more than stage props like the cartoon bomb that Netanyahu used at the United Nations in 2012.

Netanyahu's claim about how Israel acquired this "atomic archive" is only the latest manifestation of a long-term disinformation campaign that the Israeli government began to work on in 2002-03. The documents to which Netanyahu referred in the presentation were introduced to the news media and the International Atomic Energy Agency (IAEA) beginning in 2005 as coming originally from a secret Iranian nuclear weapons research program. For many years U.S. news media have accepted those documents as authentic. But despite the solid media united front behind that narrative, we now know with certainty that those earlier documents were fabrications and that they were created by Israel's Mossad.

That evidence of fraud begins with the alleged origins of the entire collection of documents. Senior intelligence officials in the George W. Bush administration had told reporters that the documents came from "a stolen Iranian laptop computer," as The New York Times reported in November 2005. The Times quoted unnamed intelligence officials as insisting that the documents had not come from an Iranian resistance group, which would cast serious doubt on their reliability.

But it turned out that the assurances from those intelligence officials were part of an official dissimulation. The first reliable account of the documents' path to the United States came only in 2013, when former senior German foreign office official Karsten Voigt, who retired from his long-time position as coordinator of German-North American cooperation, spoke with this writer on the record.

Voigt recalled how senior officials of the German foreign intelligence agency, the Bundesnachrichtendienst or BND, had explained to him in November 2004 that they were familiar with the documents on the alleged Iran nuclear weapons program, because a sometime source -- but not an actual intelligence agent -- had provided them earlier that year. Furthermore, the BND officials explained that they had viewed the source as "doubtful," he recalled, because the source had belonged to the Mujahideen-E Khalq, the armed Iranian opposition group that had fought Iran on behalf of Iraq during the eight year war.

BND officials were concerned that the Bush administration had begun citing those documents as evidence against Iran, because of their experience with "Curveball" -- the Iraqi engineer in Germany who had told stories of Iraqi mobile bioweapons labs that had turned [out] to be false. As a result of that meeting with BND officials, Voigt had given an interview to The Wall Street Journal in which he had contradicted the assurance of the unnamed U.S. intelligence officials to the Times and warned that the Bush administration should not base its policy on the documents it was beginning to cite as evidence of an Iranian nuclear weapons program, because they had indeed come from "an Iranian dissident group."

The Bush administration's desire to steer press coverage of the supposedly internal Iranian documents away from the MEK is understandable: the truth about the MEK role would immediately lead to Israel, because it was well known, that Israel's intelligence agency Mossad had used the MEK to make public information that the Israelis did not want attributed to itself -- including the precise location of Iran's Natanz enrichment facility. As Israeli journalists Yossi Melman and Meir Javadanfar observed in their 2007 book on the Iran nuclear program, based on U.S., British and Israeli officials, "Information is 'filtered' to the IAEA via Iranian opposition groups, especially the National Resistance Council of Iran."

Mossad used the MEK repeatedly in the 1990s and the early 2000's to get the IAEA to inspect any site the Israelis suspected might possibly be nuclear-related, earning their Iranian clients a very poor reputation at the IAEA. No one familiar with the record of the MEK could have believed that it was capable of creating the detailed documents that were passed to the German government. That required an organization with the expertise in nuclear weapons and experience in fabricating documents -- both of which Israel's Mossad had in abundance.

Bush administration officials had highlighted a set of 18 schematic drawings of the Shahab-3 missile's reentry vehicle or nosecone of the missile in each of which there was a round shape representing a nuclear weapon. Those drawings were described to foreign governments and the International Atomic Energy Agency as 18 different attempts to integrate a nuclear weapon into the Shahab-3.

Related Topic(s): Benjamin Netanyahu; Disinformation; Iaea; Iran Versus Israel; Mossad; Nuclear Energy Scare Tactics; Nuclear Fabrication, Add Tags
Add to My Group(s)
Go To Commenting
The views expressed herein are the sole responsibility of the author and do not necessarily reflect those of this website or its editors.