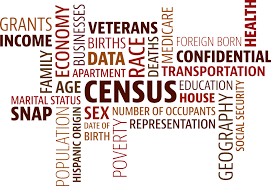 "Is this person a citizen of the United States?"

How will you answer this question when it's time to complete the 2020 census form?

How do you feel about being asked?

The United States Supreme Court is poised to provide responses to this seemingly innocuous question in a major case that could alter the country's political landscape for decades.

The federal government's justification for the inquiry is so it can better ascertain the nation's demographics, as is delineated in article one, section two of the Constitution.

Behind Ross' announcement, however, is none other than Kris Kobach, former Kansas Secretary of State, the mastermind behind the racist voter-purging "Interstate Voter Registration Crosscheck Program," and the one and only former White House adviser, Steve Bannon.

This led to a lawsuit from California Attorney General Xavier Becerra, citing the question violates the Constitution and federal laws. Several states followed suit in an attempt to get the question eliminated on the grounds it aims to deter immigrants from responding, thereby affecting state and local funds and redrawing congressional district maps the Census is used to determine.

But the nation's highest court--or at least its 5-4 conservative majority--indicated during arguments on Tuesday it plans to grant the Trump administration the green light.

The impacts of such a measure are potentially devastating.

For example, take a heavily populated state like California, which is home to millions of immigrants.

If enough residents choose to abstain from the Census, the state's population will be undercounted, resulting in fewer congressional seats and less money allocated for infrastructure investments and other public expenditures, like schools, fire departments, police protection, etc.

"If the census counts are biased or flawed, this could affect the number of representatives states have in the House of Representatives"If adding the citizenship question reduces coverage of the foreign-born population, it could reduce the amount of federal and state resources allocated to communities that have large shares of immigrants, and it could also reduce representation of states with large numbers of immigrants."

But California is, of course, not the only immigrant-rich setting. Every state in the union faces the same consequences simply out of immigrants' fears of Immigration and Customs Enforcement (ICE).

Related Topic(s): Census; Citizenship; Immigrants, Add Tags
Add to My Group(s)
Go To Commenting
The views expressed herein are the sole responsibility of the author and do not necessarily reflect those of this website or its editors.