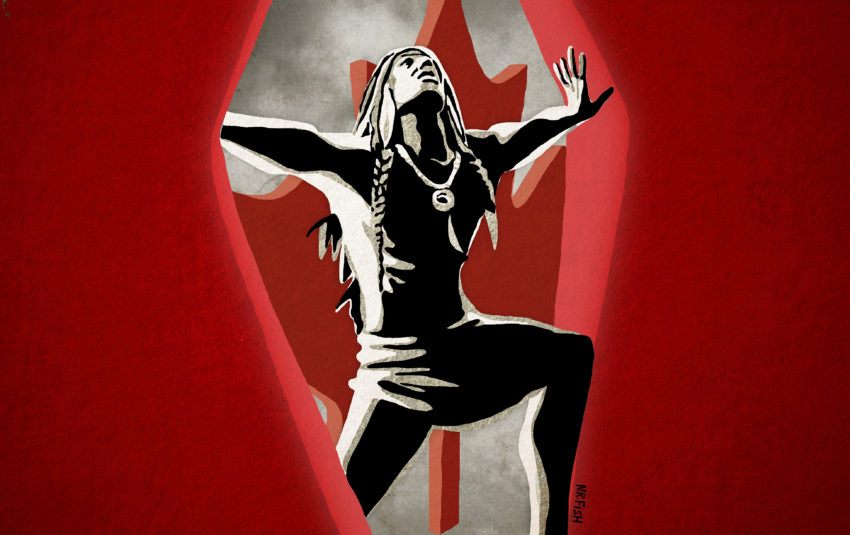 THE BEAVER LAKE CREE NATION, Treaty No. 6 Area, Canada -- I am driving down a rutted dirt road with Eric Lameman, a member of the Cree nation.

"Over there," he says, pointing out where he was born in a tent 61 years ago.

We stop the car and look toward a wooded grove.

"That's the mass grave," he says softly, indicating a clearing where dozens of Cree who died in a smallpox epidemic over a century ago are buried.

The Cree have been under relentless assault since the arrival of the European colonialists in the 1500s. Now the 500 inhabitants of the Cree reserve, where many live in small, boxy prefabricated houses, are victims of a new iteration of colonial exploitation, one centered on the extraction of oil from the vast Alberta tar sands. This atrocity presages the destruction of the ecosystem on which they depend for life. If the Cree do not stop the exploiters this time, they, along the exploiters, will die.

The reserve is surrounded by the tar sands, one of the largest concentrations of crude oil in the world. The sands produce 98% of Canada's oil and are the United States' largest source of imported oil. This oil, among the dirtiest fossil fuels on earth, is a leading cause of atmospheric pollution, releasing massive amounts of carbon dioxide. The production and consumption of one barrel of tar sands crude oil release 17% more carbon dioxide than production and consumption of a standard barrel of oil.

Tar sands oil is a thick, mucky, clay-like substance that is infused with a hydrocarbon called bitumen. The oil around Beaver Lake is extracted by a process known as steam-assisted gravity drainage, which occurs under the earth and is similar to fracking. Farther north, extraction is done by strip-mining the remote boreal forest of Alberta, 2 million acres of which have already been destroyed. The destruction of vast forests, sold to timber companies, and the scraping away of the topsoil have left behind poisoned wastelands.

This industrial operation, perhaps the largest such project in the world, is rapidly accelerating the release of the carbon emissions that will, if left unchecked, soon render the planet uninhabitable for humans. The oil is transported thousands of miles to refineries as far away as Houston through pipelines and in tractor-trailer trucks or railroad cars. More than a hundred climate scientists have called for a moratorium on the extraction of tar sands oil. Former NASA scientist James Hansen has warned that if the tar sands oil is fully exploited, it will be "game over for the planet." He has also called for the CEOs of fossil fuel companies to be tried for high crimes against humanity.

It is hard, until you come here, to grasp the scale of the tar sands exploitation. Surrounding Beaver Lake are well over 35,000 oil and natural gas wells and thousands of miles of pipelines, access roads and seismic lines. (The region also contains the Cold Lake Air Weapons Range, which has appropriated huge tracts of traditional territory from the native inhabitants to test weapons.) Giant processing plants, along with gargantuan extraction machines, including bucket wheelers that are over half a mile long and draglines that are several stories high, ravage hundreds of thousands of acres. These stygian centers of death belch sulfurous fumes, nonstop, and send fiery flares into the murky sky. The air has a metallic taste. Outside the processing centers, there are vast toxic lakes known as tailings ponds, filled with billions of gallons of water and chemicals related to the oil extraction, including mercury and other heavy metals, carcinogenic hydrocarbons, arsenic and strychnine. The sludge from the tailings ponds is leaching into the Athabasca River, which flows into the Mackenzie, the largest river system in Canada. Nothing here, by the end, will support life. The migrating birds that alight at the tailings ponds die in huge numbers. So many birds have been killed that the Canadian government has ordered extraction companies to use noise cannons at some of the sites to scare away arriving flocks. Around these hellish lakes, there is a steady boom-boom-boom from the explosive devices.

The water in much of northern Alberta is no longer safe for human consumption. Drinking water has to be trucked in for the Beaver Lake reserve.

Streams of buses ferry workers, almost all of them men, up and down the roads, night and day. Tens of thousands from across Canada have come to work in the tar sands operations. Many live in Fort McMurray, about 180 miles from Beaver Lake, and work punishing 12-hour shifts for three weeks at a time before having a week off.

The Cree, the Dene and other tribes that live amid the environmental carnage and whose ancestral lands have been appropriated by the government to extract the tar sands oil suffer astronomical rates of respiratory and other illnesses. Cancer rates are 30% higher than in the rest of Alberta, according to the Alberta Cancer Board, which was disbanded soon after releasing this information in 2008.

When he was a child, Eric Lameman was taken from his parents by the government, a common practice a few decades ago, and sent to an Indian boarding school where beatings were routine, speaking Cree or any of the other indigenous languages was forbidden and native religious and cultural practices were outlawed. He says the forced severance from his family and his community, along with the banning of his traditions, was psychologically devastating. He remembers his father and other Cree elders on the reserve performing religious rituals in secret. He would sneak to the woods to watch them as, risking arrest, they clung to their beliefs and spiritual practices.

Lameman defied the efforts to wipe out his identity and his culture, which he nurtured in spite of the attempts to eradicate them. He remained a Cree. And he says it is only his Cree roots that keep him whole and make it possible for him to endure. He suffered extreme poverty. He also had periods of addiction and even episodes of violence. It is hard to avoid personal disintegration when the dominant culture seeks to eradicate your being. Canada's indigenous people represent 4 percent of the population, but they make up more than a quarter of the inmates in the nation's federal prisons. Lameman's wife left him and their young children. She died from alcoholism on the streets of Calgary. He worked as a heavy machine operator in the tar sands. He quit when he realized the land he was despoiling would never recover and he began to get sick. He survives now on welfare.

Related Topic(s): Climate; Genocide; Oil; Sands, Add Tags
Add to My Group(s)
Go To Commenting
The views expressed herein are the sole responsibility of the author and do not necessarily reflect those of this website or its editors.