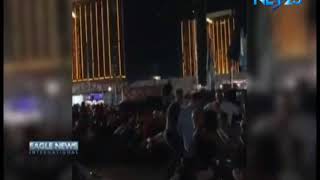 OK readers, you win. Yes, something is wrong with the Las Vegas shooting story. It is not only Tyler Durden on Zero Hedge today, but Tucker Carlson on Fox News yesterday. Carlson raises many pointed questions that do not have obvious answers. The investigation does not seem to have been handled in the normal way that such investigations are handled. I don't know what it means. I don't expect any official explanation. And I agree with you that it stinks.

I also agree that the combination of the presence of crisis actors and actual victims who were killed, although it is not clear whether from Paddock in the hotel or, as witnesses claim, from shooters on the ground among the crowd, is nonsensical. What is the point of acting out an attack when there are real victims, which there seem to be, at least a few?

And I agree with you that if there were 500+ wounded, some of them are bound to have died in hospitals from complications from their wounds, but we have had no such reports. Yes, I agree that the medical trauma personnel who gave their opinion that it is impossible that there were no deaths from wound complications are correct.

I agree also that the total number of claimed dead and wounded, a number approaching 600, is carnage far in excess of anything that the videos indicate.

Las Vegas is like all the other cases. We are given a story that is full of disbelief, but we are supposed to believe it. The print and TV media, except for Tucker Carlson, doesn't depart from the scripted story. Remember the truck attack in Nice, France? Remember that there were security cameras every block of the street along which the truck travelled? Remember the orders from Paris to the Nice authorities not to show or release anything from the recordings on the cameras and to destroy the video evidence? Remember the Nice authorities accusing Paris of an obstruction of justice? The official story handed to us by the presstitutes never explained, or adjusted for, the extraordinary order from the French central government to the Nice local government to destroy the evidence. Why would such an order be given? Why did the order not raise a jillion red flags? What was being covered up by the order?

Remember, except for the case of alleged Boston Marathon bombing surviving brother Dzhokhar Tsarnaev, no alleged perpetrator of any of these terrorist attacks is alive to tell his tale, and Dzhokhar has been kept from the public and the media. Dzhokhar's survival is itself a miracle as he was on two occasions in two different locations shot by police. Clearly, he wasn't wanted alive to tell his tale.

Yes, I know, there is no explanation why a rich multi-millionaire enjoying his life would gun down close to 600 country music fans. Yes, I know, there are not the requisite thousands of shell casings of expended brass on the floor in his room. Yes, I know it is not possible for someone to stay so long in a hotel room without room service noticing the accumulated arsenal or noticing days of non-entry by room service. Yes, I know, hotels have policies that day after day of "do not disturb" raises questions that require inquiries.

I agree with you on all of this, but they are not going to tell us. And by the way, has Tucker Carlson been fired yet, or had his run-away car crash at 100 mph into a telephone pole?

Related Topic(s): Carnage; Death; Killed; Las Vegas Shooting; Shooting; Tsarnaev, Add Tags
Add to My Group(s)
Go To Commenting
The views expressed herein are the sole responsibility of the author and do not necessarily reflect those of this website or its editors.