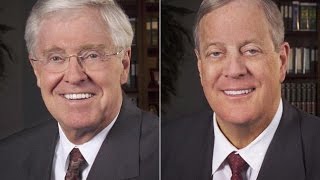 What's happening to America? I mean the big America we thought we were building. Since 1776, We the People of this bountiful land have not only worked to meet our individual needs and achieve personal goals, but we've also worked collectively to build something that's much bigger than any one of us, more important than any particular group, and more enduring than any single generation -- namely, a "little-d" democratic society committed to the Common Good.

And, yes, we're still a long way from achieving that ideal, but by fits and starts our nation has made real progress, thanks to 242 years of gutsy grassroots movements. Today, though, we need to face up to a shocking reality: There has been a coup against our national pursuit of the Common Good!

Few people are aware of it, for the coup has not been conducted as a single, bold, commando-style frontal assault. Rather, since the middle of the last century the perpetrators have mounted a sneaky, slow motion coup of attrition, moving methodically from one political venue to another, donning multiple organizational guises to strike down a law here, reverse a public policy there, demonize "others," and ambush progressive groups all along the way. Consequently, over decades, the essential American idea that "we're all in this together" has been steadily losing out to a diametrically opposed idea: "Each of us is on our own."

This bleak outlook is even recognized as a formal political doctrine: selfish individualism. Basically an ethic of greed, this "philosophy" is being advanced by a plutocratic elite that insists that the role of government is not to promote our common interests and do the will of the majority, but to protect the property and accumulated wealth of moneyed individuals from the rest of us. They are anti-tax, anti-regulation, anti-union, anti-majority radicals who militantly declare: "I got mine, good luck getting yours and don't even think of touching any of mine."

This is not some conspiracy theory, but a flat out, unambiguous, capital-lettered CONSPIRACY -- one with identifiable schemers who have been plotting, funding, and coordinating this coup on democracy itself. Its chief instigators are the multi-billionaire Koch boys, Charles and David, who've been consistently financing and implementing this ongoing assault since the 1960s. They've recruited a cabal of other uber-rich, inordinately powerful, right-wing families such as the Mercers, DeVoses, and Adelsons -- plus undisclosed multinational corporations serving as silent partners.

These "property supremacists" (as Duke University historian Nancy MacLean aptly characterizes them in her powerful new expose, Democracy in Chains) have created and continuously expanded a complex web of front groups, lawyers, campaign operatives, propagandists, academics, media outlets, and others to monkeywrench the democratic system. This secretive, opaque clique now directs a political operation that's more extensive and more tightly organized than either of the major political parties.

For years, the Koch network has been deploying this ever-growing force into governors' offices, legislative chambers, city halls, court-rooms, classrooms, chambers of commerce, tea party chapters, editorial boards, global trade tribunals, and nearly every other policy-shaping forum. Gradually, through thousands of incremental, seemingly unconnected, and often unreported actions these nouveau economic royalists have siphoned away The People's economic and political power and bulked up their minority control over the majority. From gutting yet another labor union's collective bargain-ing rights to extending the "right" of corporations and the wealthy to purchase our elections, they are actively subjugating the Common Good for their own enrichment.

As they schemed to carry away our country's democratic frame-work, piece by piece, the conspirators realized early on that they needed a cloak of legitimacy to drape over their naked thievery. So they've also been trying to snatch from us something else that has enormous, intangible value: our national story.

The true American narrative is an epic panorama tracing the struggles, victories, and setbacks of those common people who embody the virtuous heart and enduring strength of our nation's grand democratic experiment. It's a remarkable history of rebellious commoners coming together again and again to battle such repressive forces as royalty, Wall Street, robber barons, Jim Crow, multiple waves of bigotry, and arrogant corporate abuse. Each chapter reveals a people determined to defend and extend the right to be self-governing, united in a group spirit of can-do ambition and a collective belief in equality, fairness, and justice for all.

That's a great story! Unless you're intent on usurping the self-governing authority of those very commoners -- as the Koch Confederacy has been from its beginning. Thus, the Kochs have been aggressive inventors, funders, and pushers of a contrarian American narrative that has now been fully embraced and parroted by the likes of Sen. Mitch McConnell, Rep. Paul Ryan, tea party proselytizers, and doctrinaire right-wing talk show yakkers. Unsurprisingly, this rewrite of America's story is an over-the-top biopic in the image of -- guess who? -- the billionaire conspirators themselves:

Scene 1 -- A lionization of laissez-faire, "self-made," financially triumphant individuals as America's heroic defenders of "liberty." These studly giants of industry and finance are hailed as our country's amazing wealth creators and prosperity producers, so supernaturally superior to the rest of us that they should naturally control our nation's political, economic, and social policies (including sweeping, self-serving schemes such as shriveling the public sector and making capital accumulation the overriding objective of the economy).

Scene 2 -- A depiction of the masses -- particularly common workers and poor people -- as irresponsible, selfish moochers, either unable or unwilling to be producers. Disdainfully portrayed as always looking for handouts from government and corporate chieftains, America's commoners are cast as nuisances who must be restrained by law from using their numerical majority to interfere in any way with the "liberty" of the nation's wealth creators. Beware the tyrannical grabbiness of the mooching majority!

The Koch Klan's plot to strip away people's democratic rights and simultaneously jack up the governing power of avaricious elites is so contrary to our real history and so foreign to people's ingrained values that it would have been hooted down had it been submitted openly and honestly to the public. Of course, the Kochs understand that, so they disguise that fundamental distortion -- which is why the great majority of Americans are still unaware of the enormity and villainy of what's been done to them by the property supremacists and their political enablers. It's important to note that the Koch coup has been pieced together with the full complicity of practically all GOP officials, and it's also been condoned or actively abetted by corporate Democrats.

Related Topic(s): Common Sense; Corporations; Fascism; Inequality; Koch Brothers; Oligarchy; Slavery; Workers, Add Tags
Add to My Group(s)
Go To Commenting
The views expressed herein are the sole responsibility of the author and do not necessarily reflect those of this website or its editors.