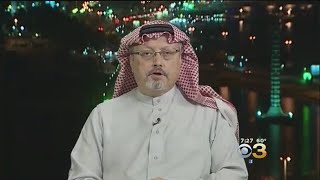 After watching the Saudis behead and even reportedly crucify critics and opponents for decades, suddenly Washington's great and good are outraged by a single murder.

The victim was a Saudi columnist from that nation's elite who was noted for his moderate, cautious views, who was also linked to the former Saudi intelligence chief, Turki al-Faisal.

But even gentle criticism of the royal government, and particularly its strongman, crown prince Mohammed bin Salman (aka MBS), caused Khashoggi to be murdered and cut up into pieces in the Saudi consulate in Istanbul, to where he was lured last week and from whence he never emerged alive. Turkish intelligence secretly monitoring the Saudi consulate picked up the gruesome details as Khashoggi's fingers were reportedly cut off, followed by his head.

Khashoggi wrote for numerous papers, including The Washington Post. He had become a pesky journalist who irked the headstrong Saudi crown prince who likely cried, like England's King Henry II, "will no one rid me of this meddlesome priest?"

As a former pesky journalist for newspapers in Qatar and Dubai, and Turkey, I am appalled by this crime. Crown Prince Mohammed has been arresting, detaining, shaking down and intimidating his subjects, all applauded by Trump and his son-in-law Jared Kushner who is deep in bed with the moneybags Saudis. 0I'm surprised that the Saudis didn't ask the Israelis, who are very good at assassination and kidnapping, to go after Khashoggi.

The uproar in Washington and the tame US media contrasted to their silence regarding the fate of other journalists killed or held in prison in Egypt and the United Arab Emirates, both US client states. Al-Jazeera's Cairo correspondent Mahmoud Hussein has been held in prison for two years without charge because he dared write about Egypt's former democratic government that was overthrown by a coup mounted by Saudi Arabia, the Gulf Emirates and Israel.

The US has been kidnapping, torturing and "disappearing" alleged enemies ever since 9/11.

Back to the Saudis. In the face of their criminal behavior, President Donald Trump sought to wriggle away from the scandal by claiming that the murder might have been done by "rogue" Saudi agents, a claim quickly echoed by the Saudis. But even the usual lap dog Republicans in the US Congress refused to swallow this baloney, calling for sanctions on Saudi Arabia.

Clearly, even the US Congress and media was growing nervous over Saudi Arabia's genocidal war in Yemen that has killed over 10,000 civilians and provoked widespread famine and disease -- all done with US and British weapons, advisers and intelligence support.

Not so fast, retorted Trump, whose business empire greatly benefited from Saudi and Gulf cash. The Saudis have arms orders for $110 billion in the hopper and, claimed Trump, $400 billion in commercial orders pending. We can't risk Riyadh cancelling this bonanza, said Trump. Just a week earlier, Trump had sneered that the Saudis could not defend themselves and had to rely on US protection.

Unstated by Trump was the tacit threat that the Saudis might cash in some of their trove of US Treasury bills. How many US legislators and journalists are on the Saudi payroll remains a deep, dark mystery.

Equally important, the Saudis and Emiratis are now closely allied to Israel's far right government. Israel has been a door-opener for the Saudis and Gulf Emirates in Washington's political circles. The Israel lobby is riding to the Saudi's defense.

Meanwhile, we will observe the disgusting spectacle of the Trump administration trying to cover up this crime and protect its thuggish allies in Saudi Arabia, while trying to provoke war with Iran.

Americans, who have been gulled by a multi-million-dollar PR blitz over the modernized "new" Saudi Arabia, complete with a handful of female drivers and commercials about "empowered women," will begin to see what a corrupt, brutal regime they have so long and unquestionably supported.

Related Topic(s): Columnist; Crime Murder; King Salman Of Saudi Arabia; Mistakes; Murder, Add Tags
Add to My Group(s)
Go To Commenting
The views expressed herein are the sole responsibility of the author and do not necessarily reflect those of this website or its editors.